Finding a weak link in the frightful parasite Schistosoma

The parasitic disease schistosomiasis is one of the developing world’s worst public health scourges, affecting hundreds of millions of people, yet only a single, limited treatment exists to combat the disease.

Researchers at the Morgridge Institute for Research at the University of Wisconsin–Madison are searching for potential new targets by probing the cellular and developmental biology of its source, the parasitic flatworm Schistosoma. 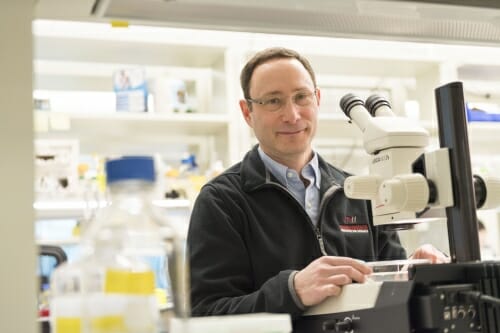 “We’re really excited about this because it opens up a number of important research directions,” says investigator Phillip Newmark. Morgridge Institute for Research

The team’s newest work, published today (July 10, 2018) in the journal eLife, sheds light on essential stages in the life cycle of this blood fluke. The team characterized several different types of stem cells that govern the parasite’s complex life cycle and also identified a gene associated with the earliest development of the germline, from which gametes form.

More than 250 million people, mostly in Africa and Asia, have schistosomiasis. The World Health Organization classifies it as the deadliest neglected tropical disease, killing an estimated 280,000 people each year. Children with the disease are often ravaged by anemia, malnutrition and pervasive learning disabilities.

The drug Praziquantel is the primary form of treatment. The drug is largely effective in killing the adult worms in humans, but not in the parasite’s other life cycle stages, leaving people exposed to continual reinfection.

Schistosomes have a complicated life cycle, switching through many different body forms as they move from snails to water to humans. The cycle begins in tainted freshwater lakes and ponds, where parasite eggs released from human waste hatch into tiny creatures whose sole task is to infect a specific type of snail. 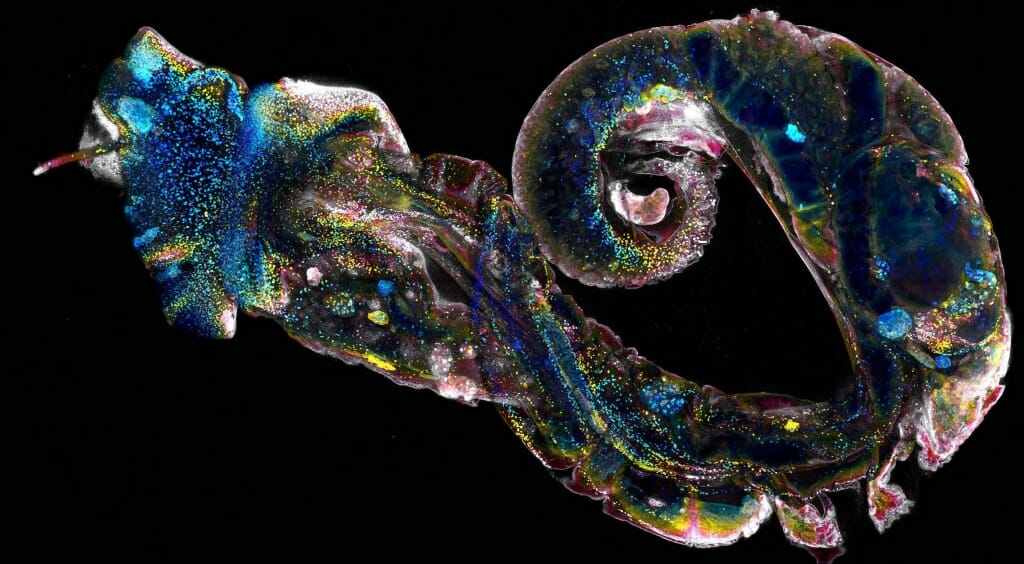 This confocal microscope image shows a small snail, removed from its shell, which is infected with schistosome parasites. The snail plays a key role in the life cycle of the parasite that causes schistosomiasis, a neglected tropical disease that sickens hundreds of millions of people. Courtesy of Bo Wang and Phillip Newmark

Within the snail host, the parasite produces massive numbers of offspring called cercariae. These fast-swimming, fork-tailed organisms are released into the water, from which they burrow through human skin and cause infection.

After penetrating host skin, the parasites must migrate into the blood vessels and find their way to the major vein that supplies the liver. During this journey, the parasites reorganize their tissues, and upon reaching the liver, begin developing reproductive organs, pair with a mate, and grow into mature adults.

The team examined the poorly understood early stages after infection through an ingenious experiment designed by co-author Jayhun “Jay” Lee, a Morgridge Postdoctoral Fellow in the Newmark Lab. He mimicked infection in a culture dish by enabling cercariae to penetrate through a portion of mouse skin into a medium on the other side. This strategy allowed him to examine when and which cells first begin to divide after infection.

“We don’t get that many aha! moments in our lives as scientists,” Newmark says. “This was one of them.”

“We don’t get that many aha! moments in our lives as scientists. This was one of them.”

“We’re really excited about this because it opens up a number of important research directions,” Newmark says. “The drug used to fight schistosomes does not work on this stage of infection. Understanding what’s happening in this early period after infection is critical, because it’s also a time when the parasites should be most vulnerable.”

Lee says the next step will be to follow these five stem cells as they continue to differentiate and form tissues. “We want to use this as a road map to figure out what the cells are doing,” he says.

The Newmark Lab’s primary focus has been on exploring regeneration in planarians — remarkable flatworms that can regenerate from the tiniest body fragments. They started work on schistosomes, “evil cousins” of planarians, in 2009 and applied decades of planarian biology to better understand their parasitic relatives.

It’s a case where model organism research may help provide answers for a human health tragedy. “This provides another example of how curiosity-driven basic research can lead to unanticipated outcomes and why it is important to support such work,” Newmark says.

The work was conducted together with Bo Wang, formerly of UW–Madison and now with Stanford University, and colleagues at Stanford and the University of Chicago.

This work was supported by the Howard Hughes Medical Institute and by awards from the Burroughs Wellcome Fund and the Beckman Foundation.