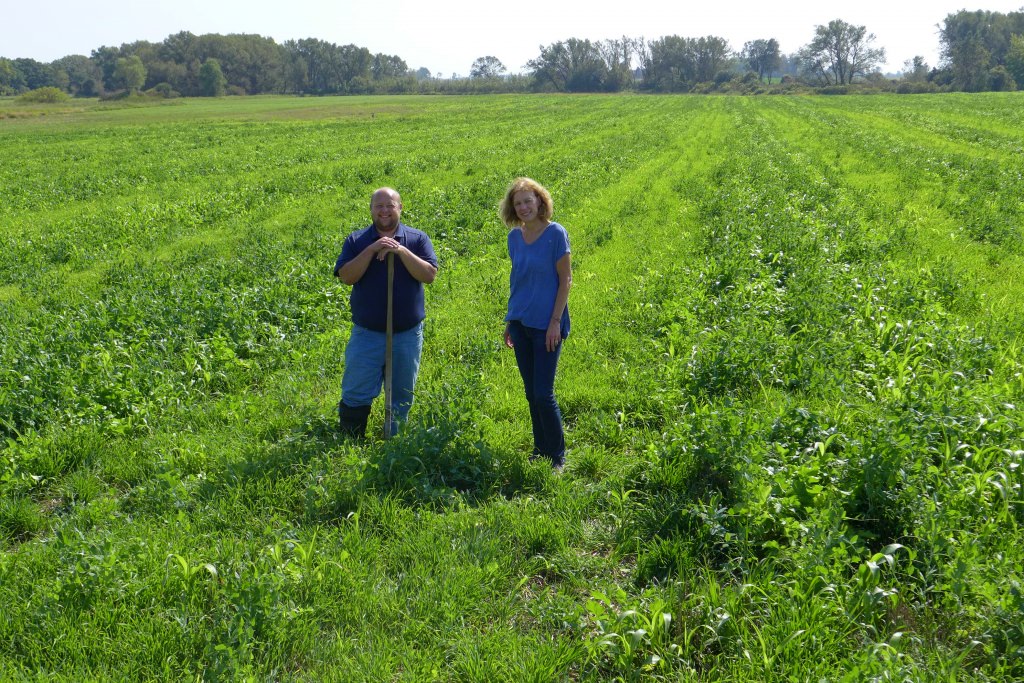 In this 2017 wheat field at the Hiemstra farm, four species form a cover crop to improve fertility and tilth, and cut erosion: sorghum, tillage radish, peas and clover. Josh Hiemstra, left, looks forward to future versions of SnapPlus that can handle complex cover crops like these. Snap already accounts for soil and nutrient loss in crop rotations – the multi-year crop progressions of plantings. At right is Becky Wagner, Fond du Lac County agronomist, who advises on the use of SnapPlus. David Tenenbaum, University Communications

A software program intended to cut water pollution and soil erosion has matured into an essential production tool for farmers, says Fond du Lac County dairy farmer Josh Hiemstra. “I began using it in 2005 because I had to, I won’t lie,” he says in his barn office, as he gears up for the fall harvest on a 525-acre farm.

The software, called SnapPlus, was created at the UW–Madison department of soil science and introduced in 2005 under a state-federal mandate to reduce soil erosion and prevent runoff of nitrogen and phosphorus. These essential nutrients can over-fertilize lakes and streams, and feed the “dead zone” in the Gulf of Mexico. “Now, I use it because it helps me make better business decisions, better environmental decisions,” says Hiemstra. “SnapPlus is a big deal for farmers.”

“SnapPlus solves several problems at once, related to distributing manure and fertilizer efficiently while meeting guidelines for protecting groundwater and surface water,” says Laura Good, the soil scientist who has led development and testing. “The program helps to maintain crop fertility without wasting money or endangering natural resources.”

The program is used on 3.36 million acres, or about 37 percent of the state’s cropland, says Good. 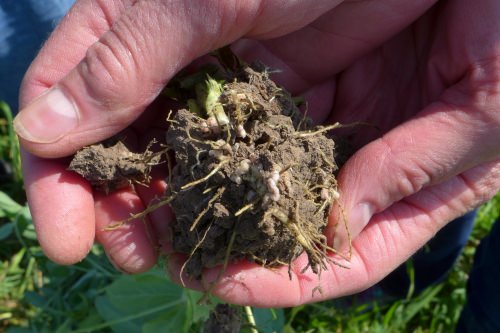 These nodules, on a leguminous cover crop, contain bacteria that transform nitrogen gas from the atmosphere into nitrogen compounds that are available to plants. Software that tracks fertility must account for this nitrogen. David Tenenbaum, University Communications

The crux of SnapPlus calculates nutrient requirements for croplands and pastures. The phosphorus calculation starts with a soil test, adds phosphorus from planned fertilizer and manure applications, then subtracts phosphorus extracted by crops. The software also estimates field erosion and phosphorus runoff rates to streams and lakes.

The math may sound simple, says Good, but the real world is complex. Soils have varying structure, slope, and subsurface geology – all factors that affect whether nutrients like phosphorus and nitrogen stay where needed or become water pollutants.

Conditions can change from year to year, even within a field. Cropping sequences – called rotations – can be variable and complex.

And weather is, well, weather.

Fertilizer ranks near the top in farm expenses, but if some is necessary, more is not necessarily better. And so beyond enabling farmers to heed runoff standards, SnapPlus offers a means to optimize fertility and yields, and control costs.

Any farm in Wisconsin that applies nutrients and has benefited from government cost-sharing or receives the agricultural property tax credit must write a nutrient-management plan according to state-specific guidelines, which is typically done with SnapPlus. “These standards and restrictions would be rather difficult to follow on paper,” Good observes.

Although SnapPlus is produced by the UW–Madison Department of Soil Science, experts from UW Cooperative Extension have contributed nutrient recommendations and algorithms.

SnapPlus automatically taps databases on soil types, municipal well locations, and streams, lakes and shallow bedrock, so it “knows” factors conducive to rapid movement to groundwater, Good says. “It tells you, on each field, what kind of soil you have, what kind of issues you have.” 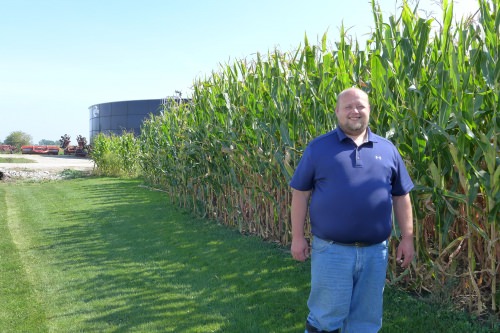 Josh Hiemstra, a Fond du Lac County farmer, has been using software developed at UW–Madison for more than a dozen years to track soil fertility and plan applications of fertilizer and liquid manure, stored in the “big blue lagoon” in the background. David Tenenbaum, University Communications

Nutrient planning is often done by hired certified crop advisors, although many counties offer training courses to farmers who want to write their own plans.

With its triple benefit of avoiding pollution, supporting yields and reducing costs, SnapPlus “is a good use of taxpayer dollars,” Hiemstra says. “You can call the county and get support, if they can’t answer, there is a full staff in Madison. The people who are writing the program are the ones telling you how to use it, and answering your questions.”

Agriculture may not get many headlines, but technology and economics are changing fast.  “Where we are now with the economics of agriculture,” Hiemstra says, “it’s even more important for farm operators to know their costs, and manage on their own. If you as a producer don’t take ownership of the information, you may be spending more than you need to spend.”