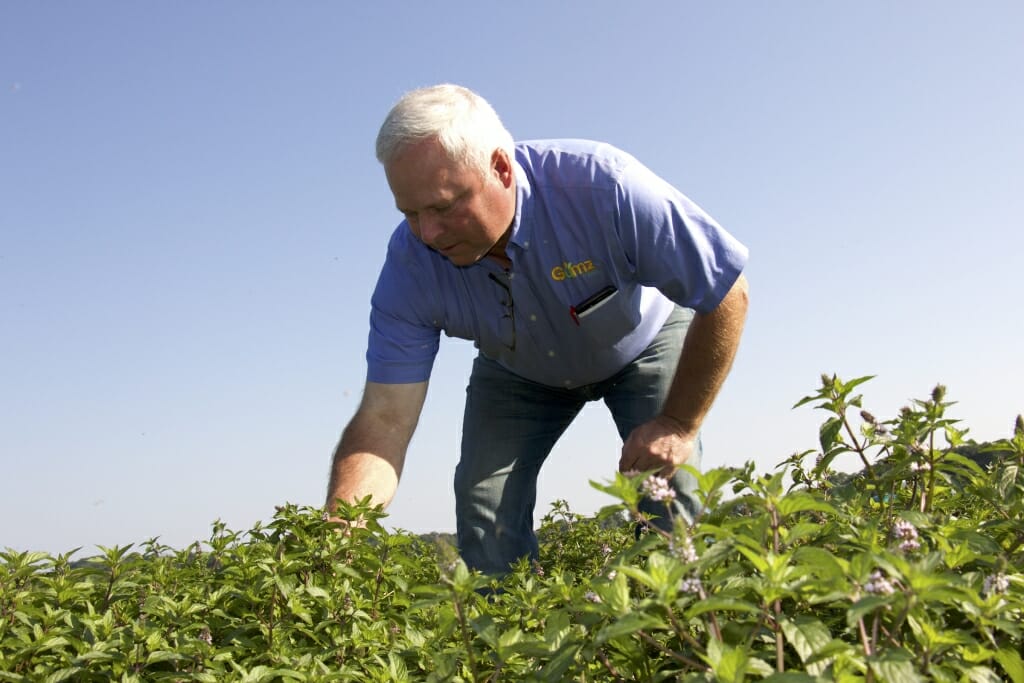 Like his great-grandfather, Richard Gumz raises mint, along with carrots, onions and potatoes, at his farm near Endeavor, Wisconsin. One acre of Wisconsin mint supplies enough mint flavoring for 50,000 to 80,000 tubes of toothpaste. Photo by David Tenenbaum

As you drive around a steel building at the West Madison Agricultural Research Station on Mineral Point Road, your nose informs you before your eyes do that you’ve found the outdoor laboratory of Scott Sanford, a University of Wisconsin–Madison agricultural engineer.

For three years, Sanford has been honing an energy-miser, continuous flow method to remove mint oil from tons of mint plants. Today, extraction occurs by injecting steam through a tub-load of chopped mint, in a two-hour process.

Mint oil – an essential flavoring for gum, toothpaste, mouthwash and tea – is grown by a dozen Wisconsin farmers on about 3,000 acres, usually on lowland, “muck” soils in the south-central part of the state. Nationally, 82,700 acres of peppermint and spearmint were grown in 2017, mainly in the Northwest.

In Sanford’s tests, mint hay is unloaded from a wagon and metered into a 13-foot-long, steam-heated chamber where an 18” auger moves and mixes the hay. At the far end, the steam and oil are condensed, and then, in a separate tank, the oil floats to the top of the water and is drained off.

The pleasant, familiar scent of mint is concentrated into a cloying one under a temporary shelter, but to a mint farmer, that’s the smell of money.

Then, as Sanford describes his search for a low-energy, continuous extraction process, an auger plugs, and instantly the afternoon program shifts from taking samples and analyzing productivity to disassembling and unplugging the auger, the centerpiece of Sanford’s invention. 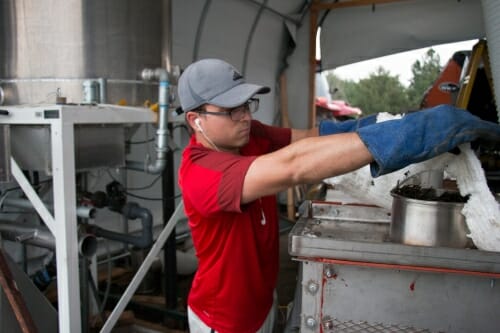 As UW–Madison senior biological systems engineering student Jack Kotte opens the system and pulls out the jam, Sanford says he’s shown that oil can be extracted in only five or six minutes, versus a couple of hours for the conventional method.

A second benefit is greater process control, says Sanford, who has appointments in UW–Madison extension and its department of biological systems engineering. “All the motors are variable speed, so we can control the residence time, feed rate and steam pressure.”

Current methods, he says, only control steam pressure and time. “The material sits in a tub as the steam is forced through,” he says, “but if the tub is not loaded evenly, you can get dry pockets, or the steam may exit too quickly through an unwanted escape channel. With the new method, the mint hay is continuously being mixed to ensure good steam contact.”

Richard Gumz, who grows 1,000 acres of mint (mostly peppermint) near Endeavor, in Central Wisconsin, says energy eats a big part of his farm budget. “The steam distillation process that we use now for extracting oil is time-consuming and energy-consuming.” 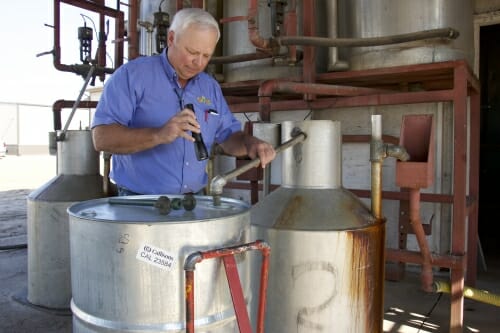 Gumz checks the level of mint oil at his distillery, where steam is injected into wagons to extract oil. A continuous process that saves energy and reduces the need for drying in the field could benefit Wisconsin mint growers, says Gumz. ”If there is a means of doing it in a more timely manner, or a cost saving, that would help us be competitive with other growing areas, and improve both sustainability and profitability.” Photo by David Tenenbaum

A third advantage is potentially equal to the other two, as the process should handle wetter mint, reducing the need to dry leaves in the field for two to three days.

That could be a compelling reason to adopt the new process, adds Gumz, who is president of the Wisconsin Mint Board, Inc. “Now, after cutting, we have to wait 48 to 72 hours for drying to remove hay from the field. If Scott’s process allows us to get it out in 24 to 36 hours, that would reduce our risk. Any time mint is cut and laying in the field in Wisconsin, rainfall can remove oil from the leaf or knock leaves off the plants.”

At worst, mint that’s plastered to the ground by heavy rain can “rot to the point where it’s not even salvageable,” Gumz adds.

Because the continuous extraction process, like the existing one, will use steam to volatilize the oil, it can utilize the steam boiler found on all mint farms. And spent hay from the new process could be dried with waste heat and burned to fuel the steam generator, allowing the process to run on renewable energy.

If Sanford can prove that the process will actually save energy – and work reliably — he says it will be up to private industry to make and sell the equipment.  “I’m not trying to invent a product. I’m trying to prove a process.” 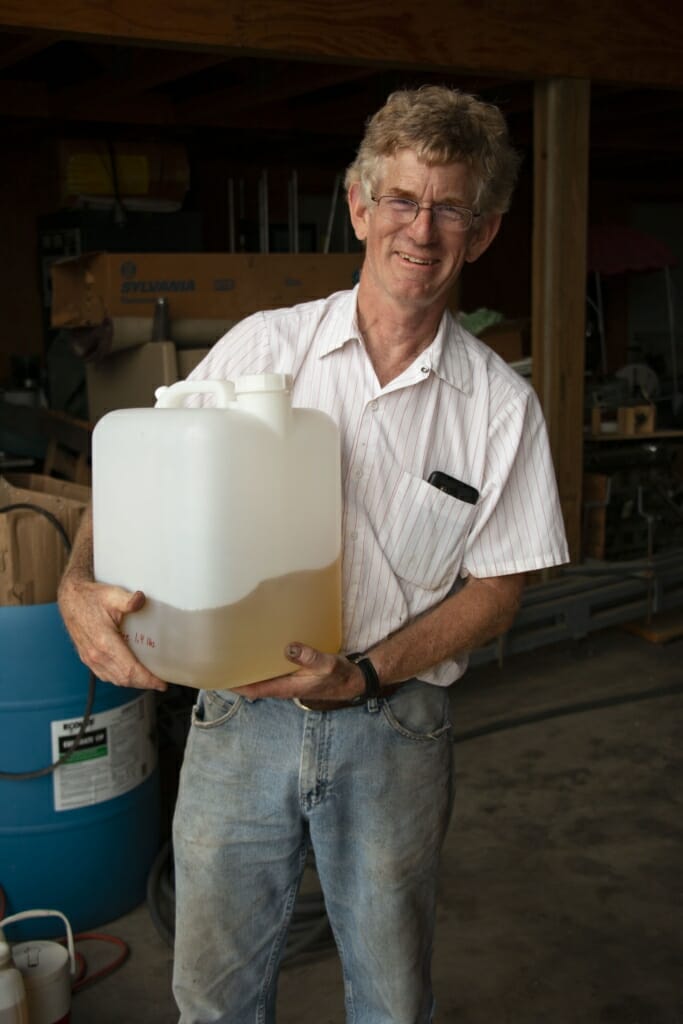 UW-Madison and Extension engineer Scott Sanford holds a jug of fresh mint oil that could probably make a truckload of toothpaste. Photo by David Tenenbaum