Right now, in a field in rural Wisconsin, you can get lost in a trilobite.

Bug-like and armored, with as many as 100 legs, these now-extinct marine creatures once cruised the planet’s seas, including those that covered Wisconsin. Wiped out more than 250 million years ago, a trilobite today is the state fossil. It is also the defining feature of this year’s award-winning Treinen Farm Corn Maze in Lodi.

View the Treinen Farm trilobite corn maze from overhead. Each weekend through the end of October, representatives from the UW Geology Museum, which proposed the fossil design, will be at the farm to talk about trilobites. Video by Craig Wild/University Communications

“I consider myself an artist and my medium is corn, with a 15-acre field as my canvas,” says Angie Treinen, designer of the maze. Each spring, as her husband Alan plants the corn, Treinen is busy scheming the next creative labyrinth. This year, for the first time ever, she accepted an outside idea for the maze. It came from the University of Wisconsin–Madison Geology Museum.

“We are trying to teach people about science and geology via a corn maze,” says museum director Richard Slaughter. “People already know about T. rex and mammoths. Trilobites are the sweet spot.” 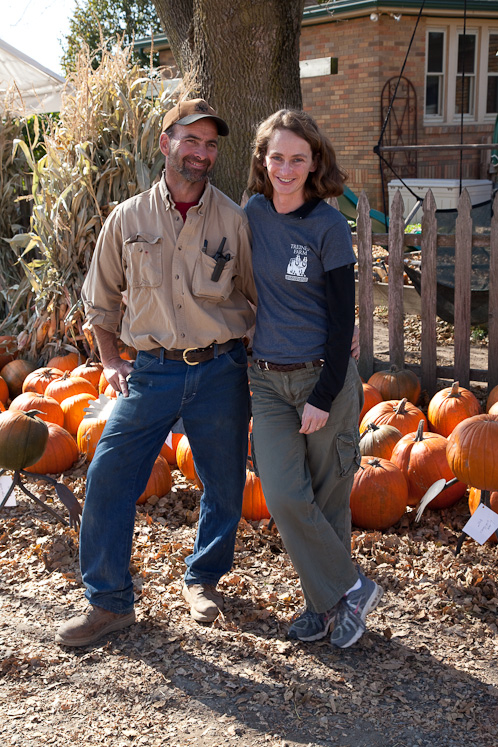 Alan and Angie Treinen. “I consider myself an artist and my medium is corn, with a 15-acre field as my canvas,” says Angie. Each spring, as Alan plants the corn, Angie is busy scheming the next creative labyrinth. Photo courtesy of Treinen Farm

From a social media hashtag — #TrilobiteTuesday — to trendy tattoos, trilobites have something of a cult following, Slaughter says. But when he and Geology Museum assistant director Brooke Norsted proposed the idea of a giant trilobite at the center of the maze, Treinen had to give it some thought.

“I knew a lot of people would look at me blankly if I told them (the maze) was a trilobite,” says Treinen, who holds a bachelor’s degree in zoology and a doctorate in veterinary medicine from UW–Madison. Typically, she designs mazes that are unique and challenging, but with designs that are immediately recognizable to visitors.

“A lot of people know it’s a fossil, but they may not recognize it’s a trilobite,” she says. “But at least it also looks like a disgusting ugly bug!”

After several conversations with Slaughter and Norsted, and trips to the Geology Museum (where Treinen spent much time with her children when they were little), she found the inspiration she needed. With the trilobite as the centerpiece, this year’s maze is a Wisconsin “Cabinet of Curiosities,” designed much like the real natural science collections representative of the Victorian era.

Cut into the corn is a honeybee, the state insect; cubes of galena, the lead ore that drew miners to Wisconsin and made it the home of the Badgers; a butterfly; a coiled shell from an ammonite, an ancient sea creature whose only known fossils from Wisconsin were dragged in by glaciers during the Ice Age; an empty bell jar that playfully contains all the dinosaur fossils ever found in the state; a spear point found near the Treinen farm; a fossil nautiloid, a marine creature once found in Wisconsin, which ate trilobites; and a rendering of the field microscope used by Charles Van Hise, a geologist, University of Wisconsin president from 1903 to 1918, and father of the Wisconsin Idea.

Explore the Geology Museum’s interactive map of the maze

“Cabinets of curiosity are how many museums got their start, including ours,” says Slaughter. “It was a way of remembering your travels across the world. In 1848, (Madison resident) H.A. Tenney implored people to send specimens from across the state to create a cabinet of geology. That became us.”

As for how to assemble the cabinet into a corn maze, Treinen found the idea for the overall design while studying a book on art nouveau, after a broken ankle kept her from visiting Paris with her son. The young members of the Treinens’ staff, equipped with a gridded bird’s-eye view of the design, staked out the maze for Alan to mow.

The largest one was only 28 inches. We found one in our cornfield that’s 480 feet. No one will top this trilobite.

Beginning this weekend and continuing each weekend through the end of October, representatives from the museum will be at the farm to talk about trilobites. They will also have specimens, activities and more surprises. On display there for the first time will be a cast of the actual largest trilobite fossil ever found — 28 inches long — made specially for UW–Madison by the Manitoba Museum, which houses the specimen. 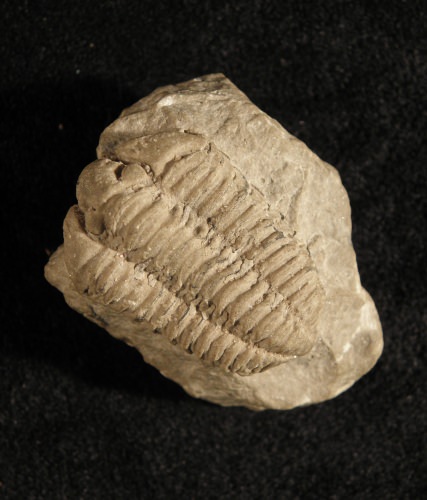 Calymene celebra is the particular trilobite chosen to be the Wisconsin state fossil. UW Geology Museum

The Geology Museum’s involvement with the Treinen Farm is supported by the Sherry Lesar Fund for Geological Wonder, which Slaughter says was recently established to “bring dreams like this maze to life” and to encourage people to get excited about geology.

“Visitors are there for a corn maze, but they’re going to learn a little bit about trilobites,” says Norsted.

That’s just fine with Treinen. “Of course, that’s the best combo, when people are having a good time and learning, too. People are thirsty for knowledge and they’re not sitting down reading an article, they’re walking around in a 480-foot trilobite and getting to hold one. The largest one was only 28 inches. We found one in our cornfield that’s 480 feet. No one will top this trilobite.”