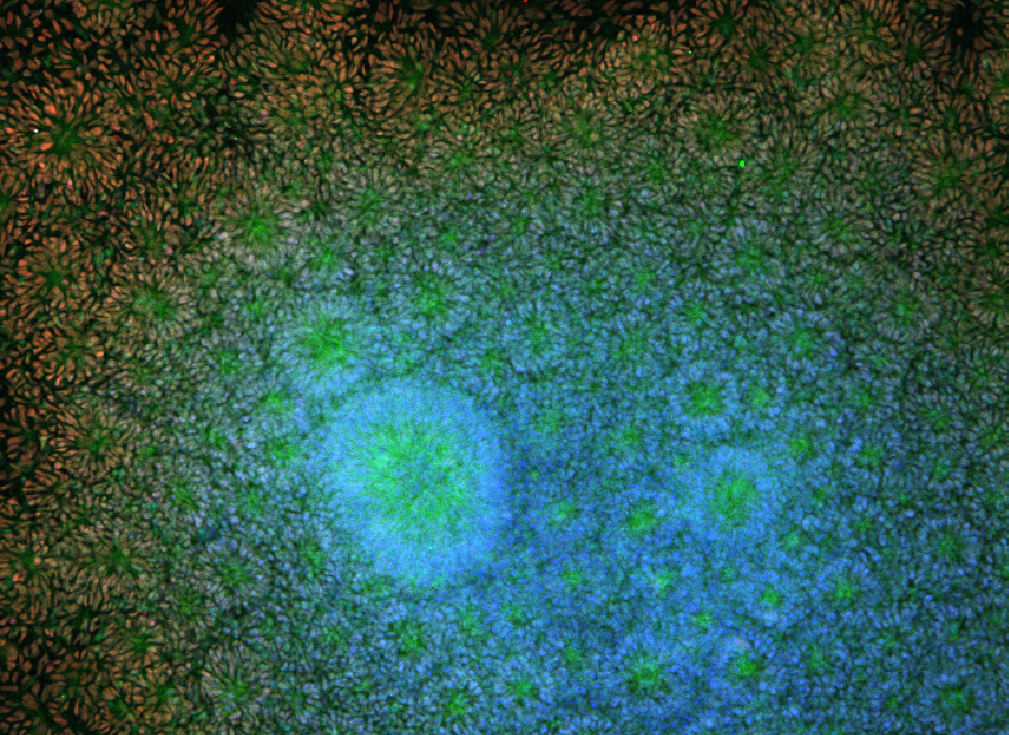 Brain cells like these grown from human embryonic stem cells in the lab of biomedical engineer William Murphy can be used in “tissue-on-a-chip” systems to screen new drugs for toxicity and effectiveness. Image: Angie Xie, Mike Schwartz, William Murphy

There was a time when Eric Shusta’s lab was more reliant on the local butcher shop than you might expect.

To learn more about the blood-brain barrier — the cellular wall between the open ocean of the bloodstream and the protected confines of the brain — and how to trick the body into letting foreign molecules (like drugs for neurological disease) through the barrier’s gates, Shusta needed brains.

“We were trying to model that layer of cells in the brain in a petri dish, and we were using primary cells from cow brains — which we’d get from local slaughterhouses — or rodent brains” says Shusta, a University of Wisconsin–Madison professor of chemical and biological engineering. “The issue is, they’re not human brains.” 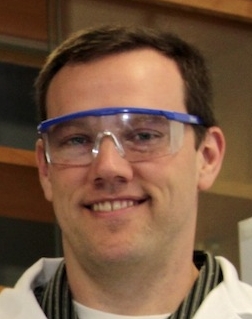 But engineers were beginning to make use of a new tool that has since opened up a world of possibilities for studying disease, developing treatments and even regenerating tissue within the human body: stem cells.

One of those researchers, chemical and biological engineering professor Sean Palecek, was right down the hall from Shusta. Palecek was exploring pluripotent stem cells from cell lines developed by UW–Madison researcher James Thomson as a way to study heart muscle and other tissue. Shusta and Palecek each set one graduate student on the problem of turning stem cells into endothelial cells, the type that makes up much of the blood-brain barrier.

“The graduate students figured out how to differentiate these pluripotent stem cells into endothelial cells that had many brain-like characteristics — the transport systems that move things through the cells, the tight way they’re packed together in the brain vasculature — to really recapitulate the important aspects and give us a way to look at human brain tissue without having to take tissue directly from a human brain,” Shusta says. 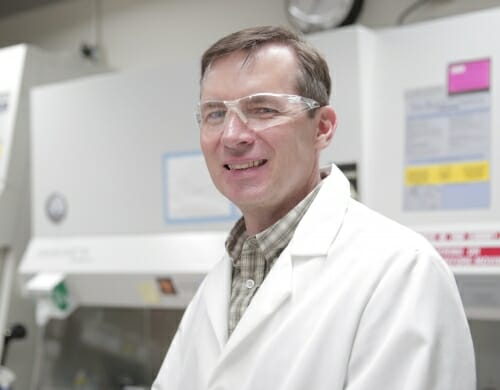 “We told them it probably wouldn’t work, but they figured it out,” he adds. “That’s why you always listen to the graduate students.”

Since Murphy joined the UW–Madison faculty in 2004, his lab has worked to (among other things) spur the regeneration of tissue inside and outside of the body. Before stem cells, he would typically start with adult cells from humans. But some human tissue is very hard to get. Living brain and liver donors are understandably scarce. And lots of fully developed cell types don’t like to divide and multiply for researchers.

“So, even if you can find tissue, it’s not like you can grow them in large quantities from an adult cell,” Murphy says. “That’s one of the primary benefits of the stem cell discovery. Now you have this unlimited feedstock to generate human cells for tissues.”

That offers researchers an opportunity to work at a scale that many alternative sources of human or animal tissue could not.

“From one mouse brain I could get six tiny experiments. I could look at two variables in triplicate,” Shusta says. “From stem cells, it’s scalable. We can do hundreds or even thousands of experiments at a time by growing what we need from stem cells.”

Much of the promise of the stem cells used in engineering labs comes from their pluripotency, the ability to turn into other types of cells. Since Thomson published his groundbreaking embryonic stem cell findings in 1998 (and since he and others figured out about 10 years later how to coax some types of human cells back into a pluripotent stem cell state), scientists have worked out how to spur stem cells into much of what labs need to try to build tissue and study disease. 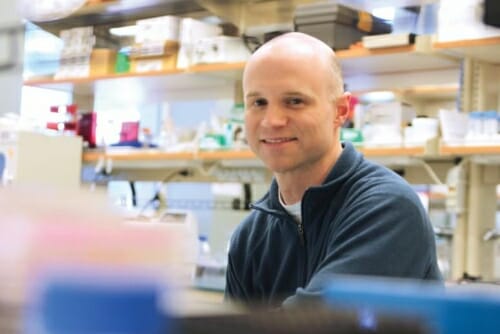 “For most of the cell types that would be of interest, now there are protocols — cardiac muscle, neurons, microglia, blood vessels, retinal cells,” Murphy says. “A significant number were discovered here at UW–Madison.”

Murphy also studies the environment around stem cells, and the way it affects how those cells differentiate into new cell types and arrange into masses of many cells.

The factors that guide that organization are chemical and physical. Getting the right cell receptors and proteins on hand may be as important as figuring out how soft or hard or remodel-able a cell likes neighboring surfaces. Find the right combination of factors, the right microenvironment, and it’s possible to nudge stem cells in the direction of building bone and tendon and blood vessels, and more.

“It’s a very rare environment in which those cells will self-organize,” Murphy says. “But once they do, the advantage is that it’s simple. You put the cells in that environment and walk away, and when you come back they’ve done it.”

Those kinds of environments are even rarer in the lab. But a good place to take hints on how to create them is the environment stem cells would consider home. 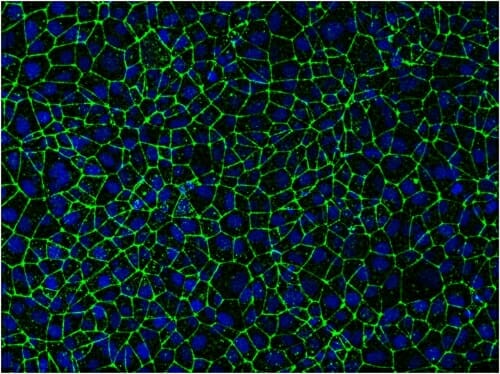 Stem-cell-derived endothelial cells packed tightly together give researchers a way to study the blood-brain barrier, including opportunities to try out ways to deliver drugs to the brain through the barrier’s own cellular gates. Image: Eric Shusta and Tongcheng Qian

“A lot of what we do is motivated by what we know about the way cells develop in the body, and how we can recapitulate that process in a dish,” says Palecek.

On top of the blood-brain barrier research, Palecek’s lab worked with UW–Madison cardiologist Tim Kamp to spur stem cells to reproduce as heart muscle cells called cardiomyocytes. That success came in 2012, and the effort has since turned to refining methods to produce cells in huge numbers.

“Now we’re working on how to produce them on a clinical scale,” Palecek says. “We can make a million cardiomyocyte cells. But a person who has a heart attack typically loses a billion cells. So, if Tim Kamp wants to start a clinical trial, he is going to need a lot of cells.”

The stem cell field is building infrastructure to make it even easier to set up a lab or try new stem cell experiments.

Like many stem cell researchers, Shusta is excited by the opportunity to study the development of disease with genetic roots in cells from the moment that disease begins to develop. That can be done by taking cells from a person with the disease, using those cells to create induced pluripotent stem cells, and — because the original patient’s disorder carries through the process — pushing them to develop into the cell type in which you would like to study the disease.

“We very quickly became perhaps the top institution in the country in the stem cell engineering area. That was a field that didn’t exist, and we built it.”

Shusta and Clive Svendsen, a former UW–Madison neurologist, did this recently with a rare neurological condition called Allan-Herndon-Dudley syndrome, building the first model of the disease in blood-brain barrier cells in which its progression and potential treatments could be studied.

But it takes a lot of time and resources to work through that process anew for each disease or disorder.

“In many cases, you don’t need to do all that work anymore, because there are efforts funded by the federal agencies where people are banking these materials — stem cell lines from a whole host of control and disease subjects,” Shusta says. 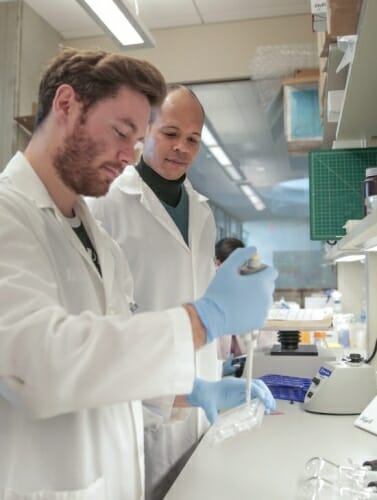 Biomedical engineering faculty at UW–Madison are at work on new platforms to study disease. Randolph Ashton’s lab is using stem cells to grow neural tubes, a precursor of the spinal cord. David Beebe is trying to model a form of vasculitis, which causes chronic inflammation of blood vessels, related to a single gene mutation. Krishanu Saha has used the gene editing tool CRISPR to correct disease-causing mutations in stem cells derived from patients. Gene editing could be used to add genetic disorders to stem cells, broadening their utility as a platform for studying the progression of disease.

Another plus of stem cells’ ability to repeat in a dish the inner workings of so many types of human cells is already providing an important head start for drug development.

“Every major pharmaceutical company in the world has a stem cell program,” Murphy says. “They use stem-cell-based assays for discovery of new drug candidates and sometimes for testing a drug on a human cell population.”

In many cases, those tests are supplements to testing in animals, though stem-cell-based processes can typically offer a look at the toxicity or efficacy of a drug on just one type of cell or tissue at a time.

Murphy’s lab is working to make this tissue-on-a-chip testing approach a way for cancer doctors to choose the best treatments, starting with a type of skin cancer, metastatic melanoma, which is likely to spread to places like the brain and liver. 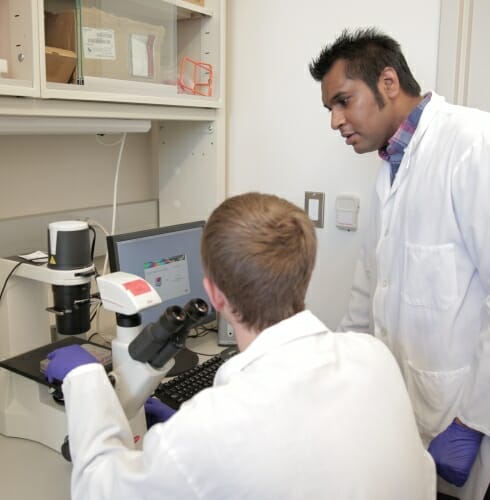 This personalized version of medicine that can employ single cell or tissue types is getting closer to being clinically useful. It’s much harder to recreate the complexity of the connected organs and systems that work together in animals.

“If you want to test the effect of a potential drug or toxin on the brain, then you really need to have a liver present as well — because that chemical compound might be processed in the liver and affect the brain differently,” Murphy says. “So, a model needs to have both a liver and a brain connected by some kind of blood supply. And then if you’re going to do that, you might also need to have an immune system present, because the immune system might have an important effect on the process.”

Engineering ways to incorporate that kind of complexity will take time, but the stem cell field has come a long way since 1998.

“Where we’ve been able to go in 20 years is big, and every year there are more opportunities,” Palecek says. “We’re still at the exponential growth phase.”

Important parts of that growth will keep happening at UW–Madison, according to Murphy, who was director of the university’s Stem Cell and Regenerative Medicine Center until earlier this year.

“We very quickly became perhaps the top institution in the country in the stem cell engineering area. That was a field that didn’t exist, and we built it,” he says. “Now it’s a very popular field nationally, and we’re a leading hub for it.”