Assistant Professor Kathleen Bartzen Culver has been named director of the Center for Journalism Ethics (CJE) in the UW–Madison School of Journalism and Mass Communication.

“I am incredibly grateful for this opportunity to lead the center at such an important time in journalism,” Culver said. “The industry faces many pressures, yet the journalism itself has never been stronger.” 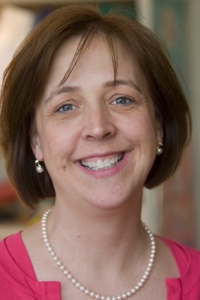 Culver will succeed Robert Drechsel, who was the director since 2013 and is retiring. Drechsel followed the CJE’s founding director, Stephen Ward.

“I’ve known Katy in many capacities for many years. In fact, we first met when she was a student in my J559 class as an undergrad,” says Drechsel. “So it has long been crystal clear to me that she is ideally equipped for the job — smart, creative, passionate, hard-working, incredibly well connected with the media community locally and nationally, and a well-regarded expert on media ethics.”

The center’s mission is to encourage the highest standards in journalism ethics worldwide, facilitating debate and discussion while providing resources for both producers and consumers of news. It hosts an annual conference for journalists, students and the public each spring, most recently focused on race, ethnicity and media ethics.

Culver “brings new energy and fresh ideas to the position, and we’re expecting the center to be more influential than ever in national conversations on journalism ethics,” says Hemant Shah, director of the journalism school.

Culver paid tribute to Jim Burgess, a UW–Madison alumnus who went on to become publisher of several newspapers, including the Wisconsin State Journal. His gift provided the endowment for a professorship in ethics and, in turn, the center in 2005.

“The industry faces many pressures, yet the journalism itself has never been stronger.”

“I still remember the day I first found out about Jim Burgess’ gift,” Culver says. “I knew from that moment that I had to be involved in an effort that was so timely and so critical.”

Working closely with Assistant Professor Lindsay Palmer, Culver has seen the center grow and has more aspirations that build on the foundation laid by her predecessors.

“One of my key goals in my work with the center has been to increase students’ engagement with our work. I helped establish a student fellows program and led student digital teams covering our conferences,” Culver says. “I’m looking forward to knitting even more students into the fabric of the center. This work helps ethics come to life for them.”

For more on the ethics center’s work, visit its website and full digital archives of its annual conferences.