Six projects that combined aggressive reporting on important issues with care for the consequences of that reporting are finalists for the 2017 Anthony Shadid Award for Journalism Ethics. 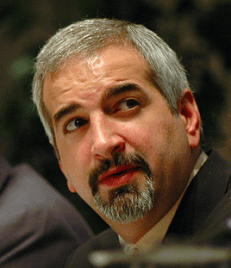 The 2017 winner will be chosen from among six outstanding examples of journalism that displayed high ethical standards in the pursuit of truth, says judging chair Jack Mitchell. The finalists are:

The Shadid Award honors journalists who, individually or as a team, exhibit a strong commitment to ethical journalism by acting with integrity, honoring ethical principles in their practice and/or resisting pressure to compromise ethical principles.

While many stress the hard work of skilled journalists who write compelling stories that serve the public interest, the Shadid Award focuses on the ethical aspects of excellent journalism — the degree to which journalists honor ethical aims and standards.

Read the finalist stories and nominations

Past winners of the award include a team of Associated Press reporters whose investigative reporting resulted in the freeing of 2,000 slave laborers used by the fishing industry in Southeast Asia; and reporters and photographers at the Chicago Tribune whose revelations about serious abuses in Illinois’ juvenile justice system brought about reforms.

The center will announce a winner from among the finalists at its annual ethics conference March 31 in Madison and present the award at a ceremony April 19 at the National Press Club in Washington, D.C.

The award is named for Anthony Shadid, a UW–Madison journalism alumnus and foreign reporter for the Washington Post and The New York Times. Shadid won two Pulitzer Prizes. He died in 2012 from health complications while reporting in Syria. He sat on the center’s advisory board and was a strong supporter of its aim to promote public interest journalism and to stimulate discussion about journalism ethics.