Known for years to his students and colleagues for his annual “final lecture,” William Cronon returned to campus recently for a retirement celebration — two years delayed — that prompted Susan Zaeske, associate dean for arts and humanities in the College of Letters & Science, to joke, “We’ve waited a long, long time for this: Bill Cronon’s final lecture!”

With that introduction, Cronon, who held the position of Frederick Jackson Turner and Vilas Research Professor of History, Geography, and Environmental Studies before retiring from UW–Madison in 2020, took to the stage to deliver the keynote address — without notes, and from the heart — at “Common Places: Keywords for a More Than Human World,” a conference held in his honor April 30 by his former PhD students.

“Thank you for having been part of this journey with me,” he said. “I’m so grateful to all of you.” 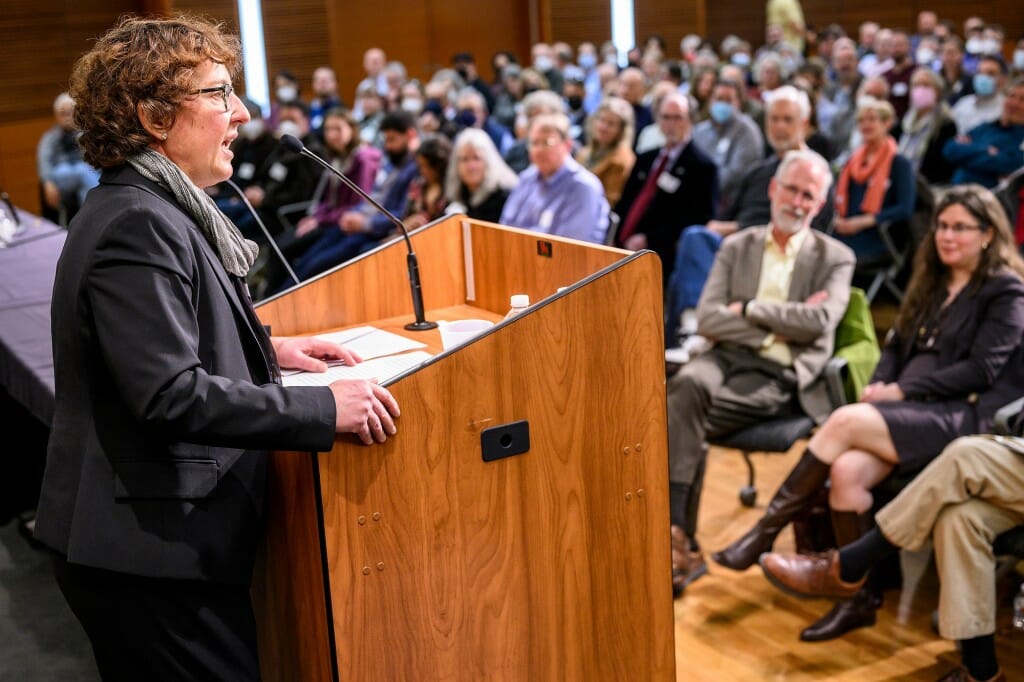 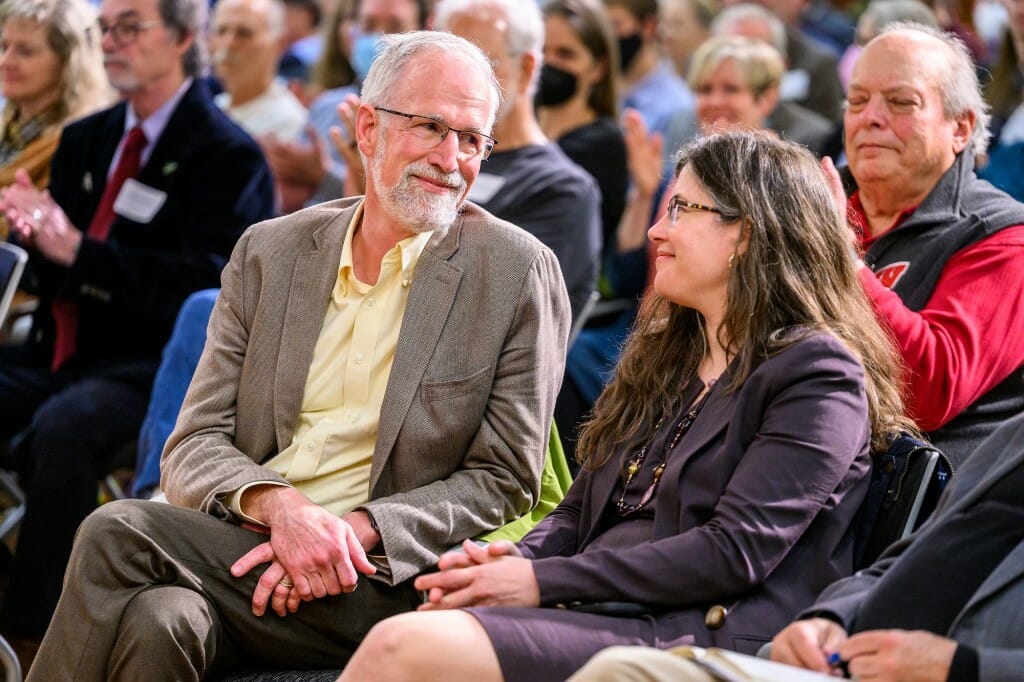 2 Cronon and his wife, Jennifer Dueck, associate professor of history at the University of Manitoba, listen to the introduction. Photo by: Jeff Miller 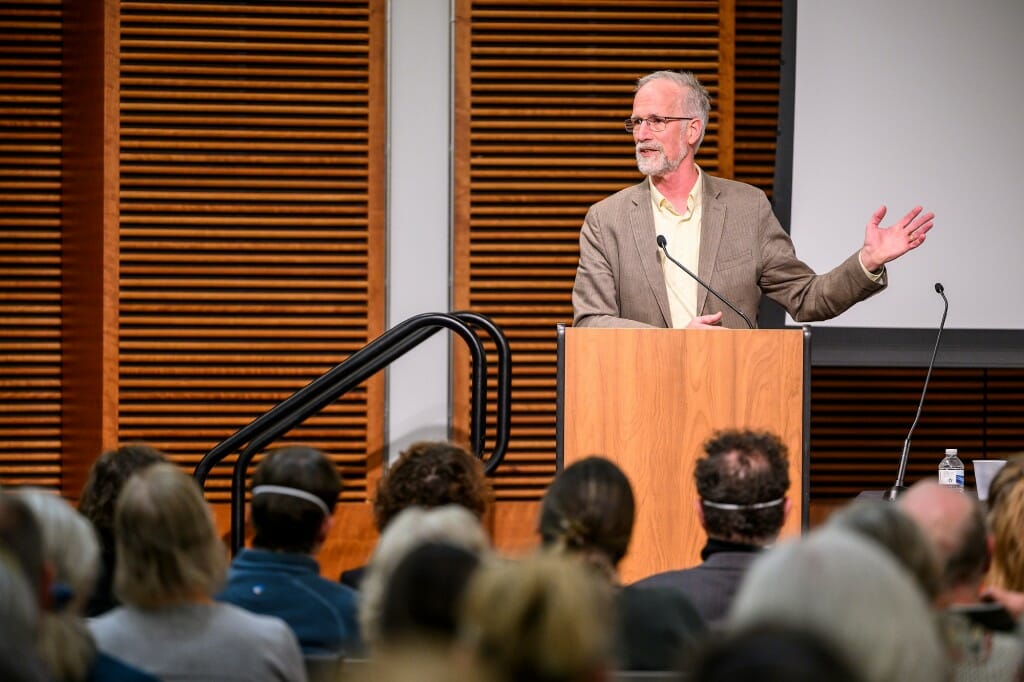 3 “The excitement for me," Cronon said, "is taking my own excitement and pouring it out into the room and seeing the people out there go, ‘Oh, that’s so cool.’ That has been a source of joy for me in my life.” Photo by: Jeff Miller 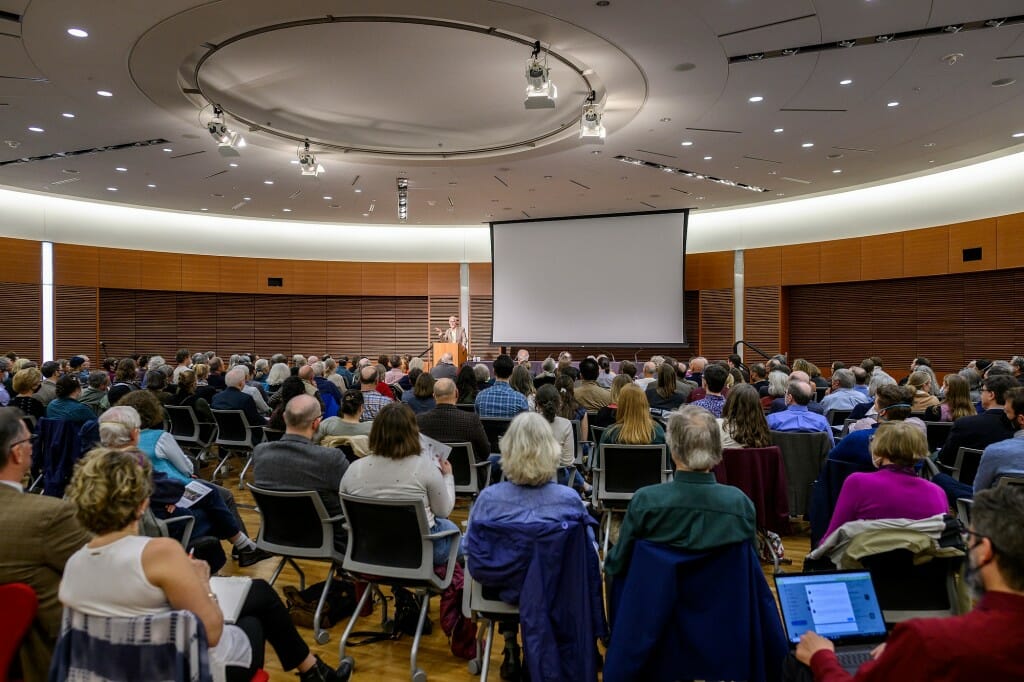 4 The conference focused on "the shifting cultural meanings of keywords that have guided (Cronon's) thinking about nature, space and history." Photo by: Jeff Miller 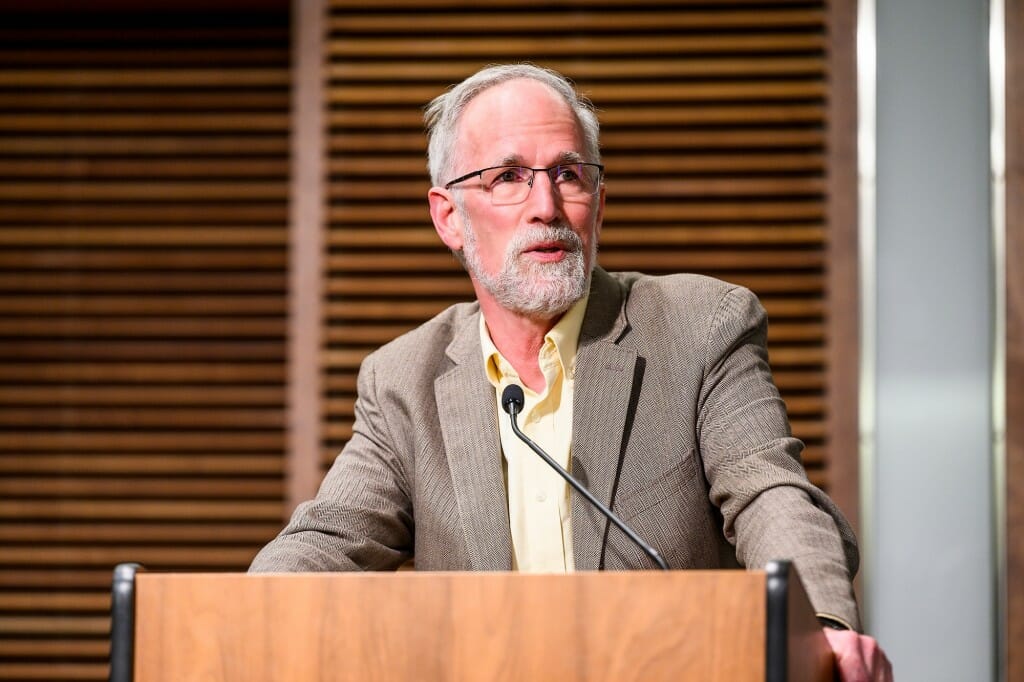 5 “We are all bridges between generations," Cronon said. "That act of bridging, of passing on — even as we battle with our parents and grandparents, our children and grandchildren, all those generational frictions — there’s still an act of passing on that happens.” Photo by: Jeff Miller 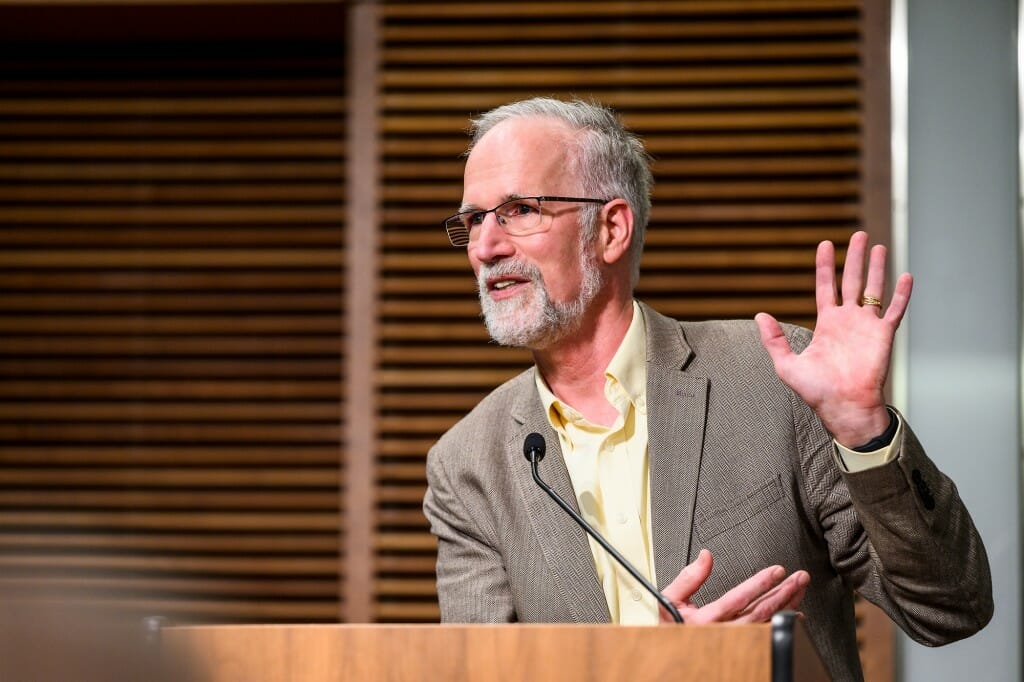 6 “The discovery of history ... was a space where everything was relevant," Cronon said. "Geology, biology, ecology, economics, sociology, politics, history, physics, comp sci … could all be brought under the glorious umbrella of trying to do a better job at understanding the past.” Photo by: Jeff Miller 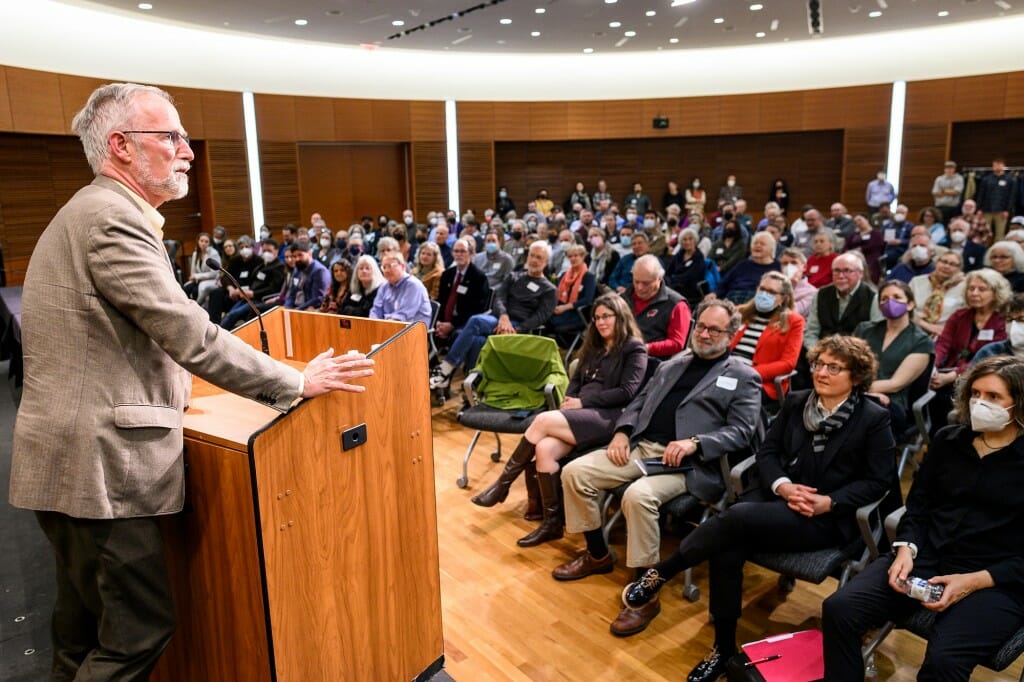 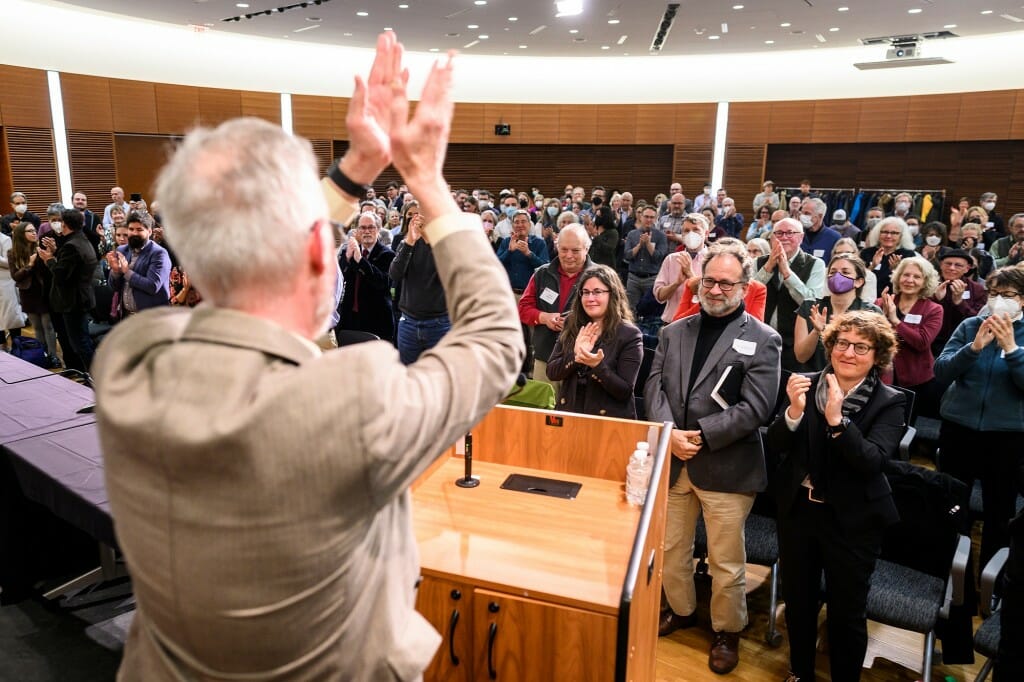 8 Cronon returns the applause during a standing ovation after his remarks. Photo by: Jeff Miller 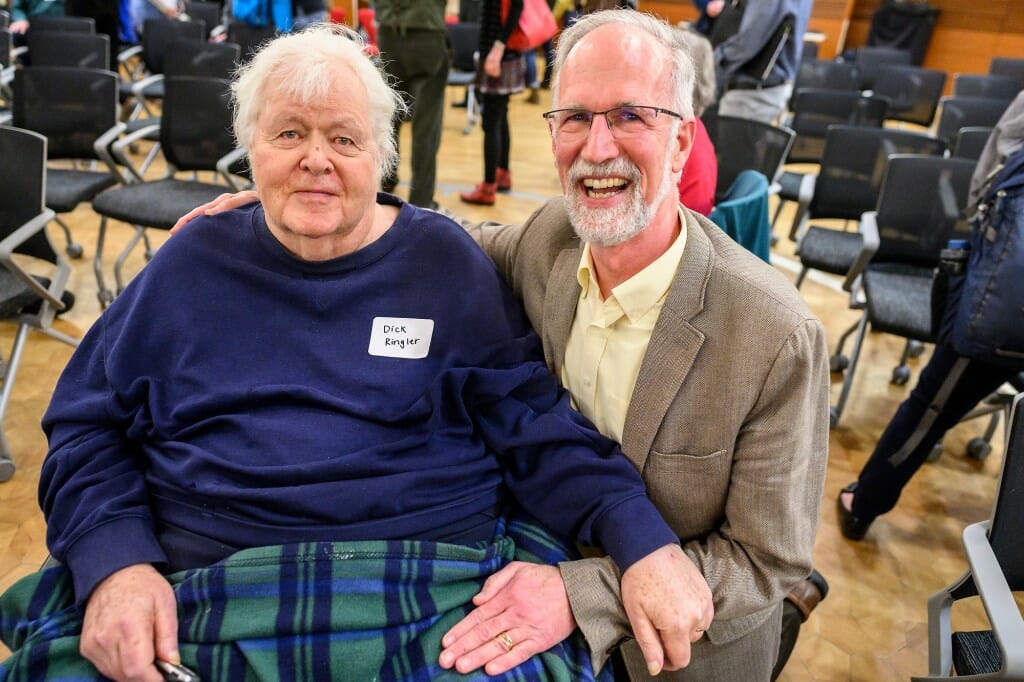 9 Cronon visits with a mentor from his undergraduate years at UW–Madison in the 1970s — Richard "Dick" Ringler, now a professor emeritus of English and Scandinavian studies, whose class Cronon says was "life-changing." Photo by: Jeff Miller 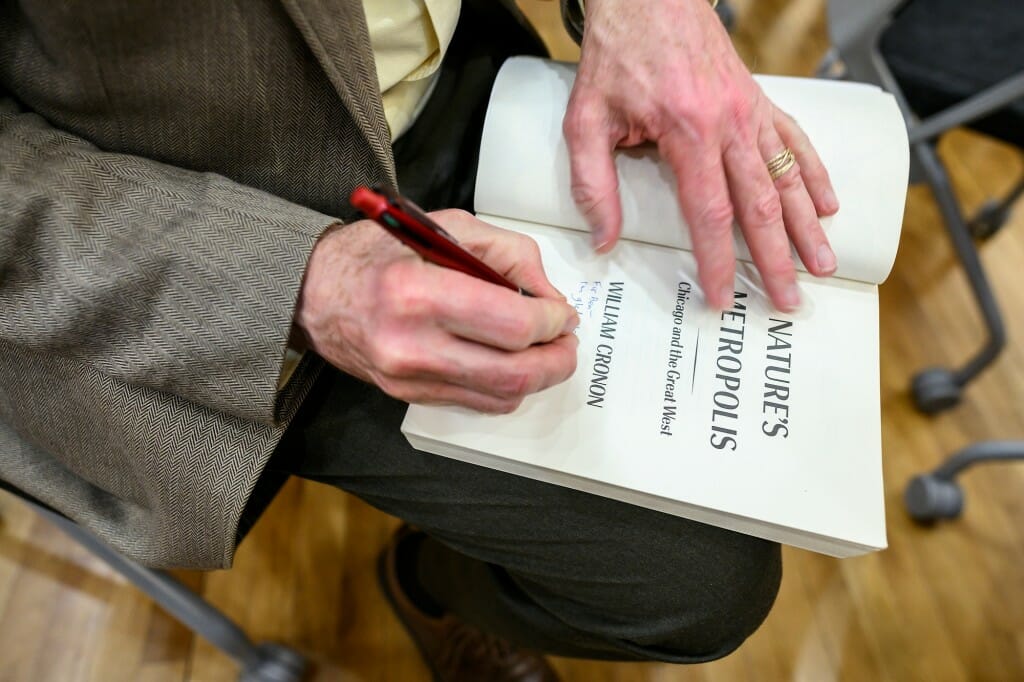 10 Cronon autographs one of his books for a former student during a break in the conference. Photo by: Jeff Miller 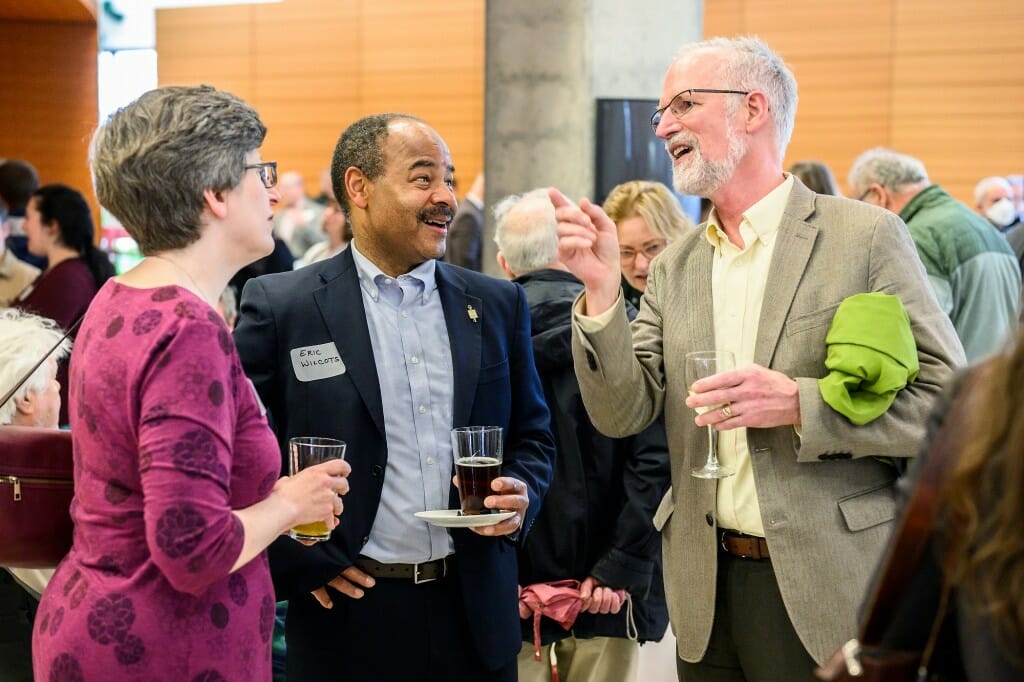 11 Eric Wilcots (center), dean of the College of Letters & Science, and his wife, Peg Wilcots, talk with Cronon during a reception at the Discovery Building. Photo by: Jeff Miller 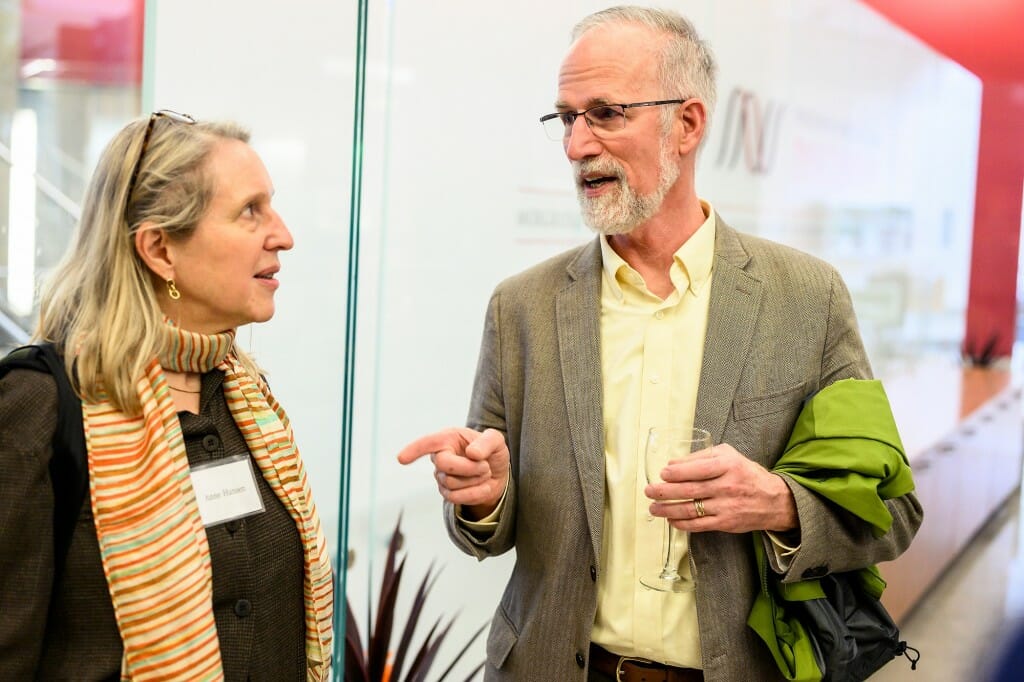 12 Anne Hansen, chairperson of the Department of History, talks with Cronon during the reception. Though she knew him for years as a colleague, she said she learned much more about Cronon's passion from his keynote address. Photo by: Jeff Miller 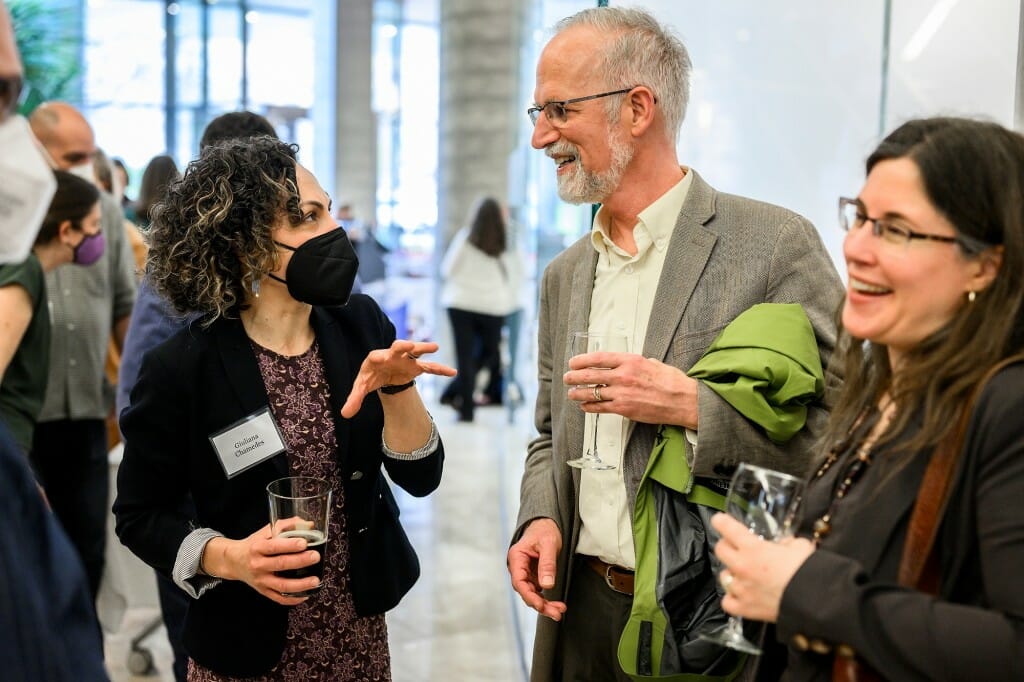 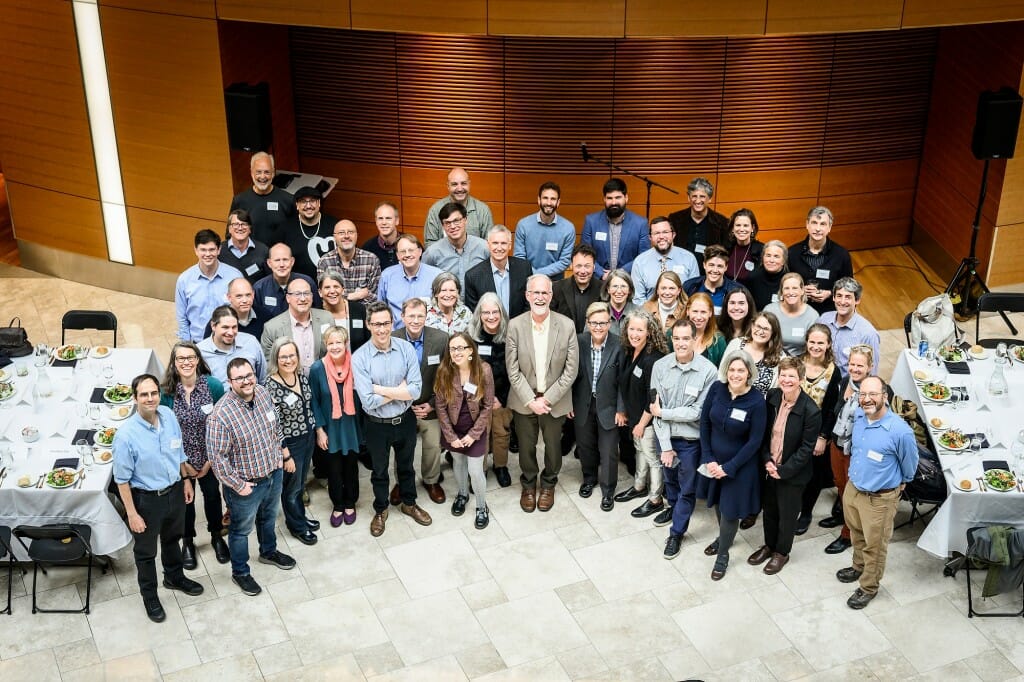 14 Cronon, shown with former students, said during his keynote address, “There are many things we did together here that were impossible, that couldn’t be done. But we didn’t know they couldn’t be done so we figured out a way to do them — and that’s the way the world works.” Photo by: Jeff Miller