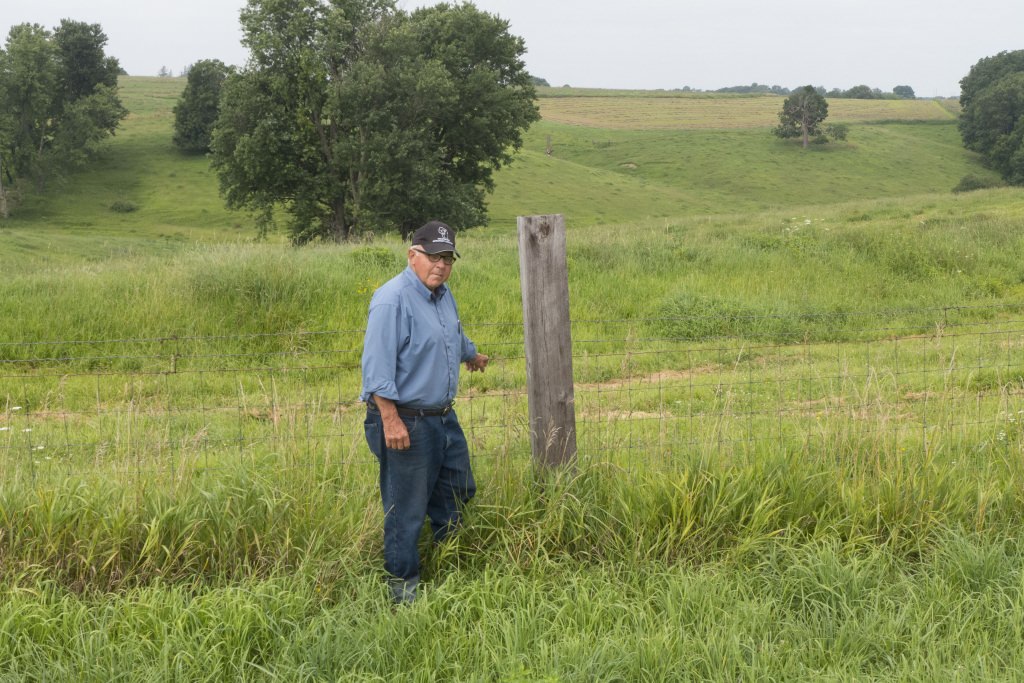 LANCASTER, Wisconsin  – You never know where a conversation with Gerry Weiss will drive you. Today, it’s swerved toward fence-line weaning.

Whatever that may be.

Once explained, however, fence-line weaning emerges as a common-sense, humane approach to a life stage that can be traumatic to beef cattle. Conventionally, farmers would separate mother and calf, who would bellow their complaints across the fields for a few days before finally moving on, exhausted.

But Gerry Weiss, now 72, was raised on a farm by an inventive father and uncles who believed – and acted—as if “the answers are in front of you. Keep your eyes open.”

Weiss learned about 35 years ago that this can be true even before the question becomes apparent. “We were getting the newly weaned calves ready to eat dry feed: ‘No more milk from mom!’ and I looked behind me and mom was standing there. She’d come a mile and a half up a creek, through three flood gates [fences across streams], to get back to her baby. Fixing flood gates is not a lot of fun, nor is getting her back to her pasture, so we started doing fence-line weaning, long before it became the vogue of the industry.”

Weiss did not invent the practice, but he realized that fence-line weaning eases stress for animals and cattlemen alike. Once separated by a strong fence, mother and child can do everything but nurse. “They have less stress, baby can talk to its mother and she can look through the fence and see that her baby’s okay,” Weiss says. Within a few days, both parties get over the separation blues.

In a state proud of the connections between the UW–Madison College of Agricultural and Life Sciences and the linked industries of farming and food processing (which employed 413,500 and created more than $88 billion in economic activity in 2012), Gerry Weiss stands as a key conduit between academic experts – many with roots in the soil – and those who make a living growing crops and animals.

During his various collaborations with the branches and people at CALS, Weiss built a specialized swine barn designed for research, and performed contract research for the late Mark Cook of UW–Madison, as well as firms in the hog industry.

“He’s principled, all about accurate data, accurate communication,” says Dan Schaefer, who for many years chaired the animal science department at UW–Madison. “There’s no varnishing, no window dressing. ‘Tell it to me the way it is.’ He has always been respectful of faculty, though he will speak out if someone has a loony idea.”

Weiss is a native of Dane and Columbia Counties who says he began farm work at age five. In 1975, after earning a bachelor’s degree in animal science from UW–Madison and a Ph.D. from Iowa State, he began working at Dubuque Packing Co. as assistant to the president for research and development. 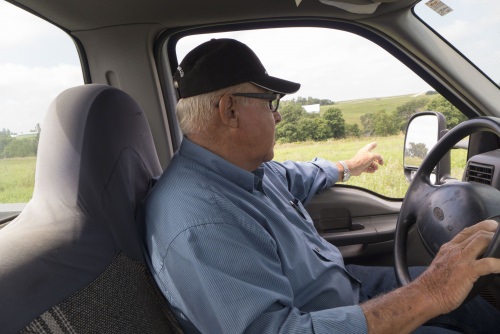 A tour of Weiss’s acreage features smooth passage across waterways that were truck-deep gullies when he bought the property. David Tenenbaum, University Communications

Recalling that struggle elicited his first reference to UW–Madison. Weiss credits Bill Paulson, the former superintendent of the university’s nearby Lancaster Experimental Station, for having local knowledge of the ideal seed mix for his pastures, terraces and waterways.

Farmers avoid plowing low areas where rainwater must run off to foster an erosion-resistant ground cover. Weiss goes one better by planting hay, getting a saleable crop as a fringe benefit with the erosion control. “It may seem obvious, but I’ve never had anybody mention that to me,” says Schaefer. 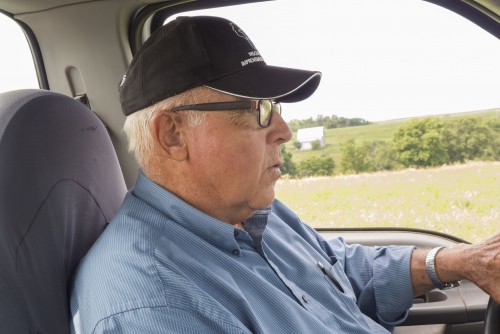 The foulest oath Weiss will utter is this: “We’ve always done it that way.” David Tenenbaum, University Communications

Weiss has managed to survive in the ever-changing farm economy for 40 years. Today, he says, corn and hogs are a quick way to lose money, but growing forage is profitable, so hay is what he sells.

Decades ago, Weiss pioneered the use of “rotational grazing” on his improved permanent pastures, moving cattle to protect the forage from trampling. The practice, now a mainstay of organic and other low-impact agriculture, replaces tillage and the haulage of feed and manure in conventional cattle raising. At the same time, it increases productivity, allowing any given field to support more animals.

These practices have virtually eliminated soil and stream-bank erosion, which approaches zero on Weiss’s place: a pickup-truck tour of the fields in July’s rainy spell reveals no mud.

I do see a lone Canada thistle, and tease him about it, as these thorny weeds are one of the worst pasture pests in Wisconsin. Weiss promises to annihilate it to block reseeding.

These examples show a farmer with a long-term view. “He’s very conservation conscious,” says Jerry Doll, a professor emeritus of agronomy, and weed expert. “He called after an 8-inch rain, happy that his grass waterways and terraces had no visible erosion, while his neighbors were looking at gullies.”

“His mind is always churning; I don’t know how he sleeps at night,” Doll adds.

Back at the farm, as we tour a barn full of unsquare angles, telescoping gates and an unexpected, sloping floor designed to guide the cattle, Weiss distills his wisdom: “The cattle taught us.” These odd features, he says, are all designed to get cattle to move where he wants. “The animals taught us. We don’t use sticks or prods to move them, don’t need to.”

Weiss developed or adopted other common-sense tactics, such as washing mother hogs and swine buildings to remove worm eggs and old manure before sows give birth. “We developed biosecurity before that was a word,” he says. 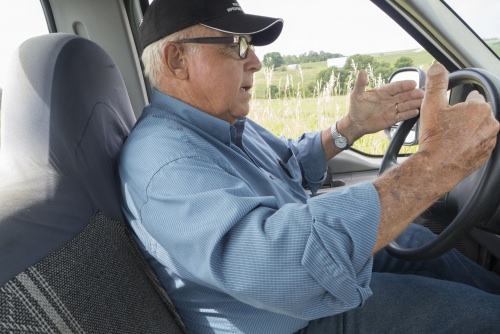 Gerry Weiss has managed to survive in the ever-changing farm economy for 40 years by being adaptable. David Tenenbaum, University Communications

The swine barns are now empty — in response to harsh market conditions — and the Gelbvieh cows that Weiss imported from Germany in the 1970s are his only livestock. Having viewed some of Weiss’s labor (and cow-saving) innovations, I wonder why he only has 60 head.

I have plunged into the manure pit called conventional wisdom. The answer is in front of my face, something Weiss is kind enough not to mention.

“I match the cow herd to the rotational grazed pasture program,” he says. “Sixty head is my carrying capacity with my current 68 acres of permanent pasture, but there’s plenty of room for more pasture here.”

Such an expansion, however, would best be carried out by the next generation of stewards of this land.

At 72, Weiss is erudite, challenging, with an unpredictable, probing sense of humor and a preference for puns in English and German. And even though he occasionally mocks his Ph.D., saying it stands for “Pile it higher and deeper,” his intelligence is unmistakable.

“I think he’s very bright, and quite self-deprecating,” says Schaefer. “He can be prickly and takes pride in barbed comments, but he does that mostly for effect; he wants to know if he’s getting through to you. The barbs are quite dull; they are just Gerry Weiss.”

Underneath the testing remarks, Schaefer sees the embodiment of a fundamental precept of the great Midwestern public universities. “He’s a land-grant creation. To me, he epitomizes the application of science to agriculture.”