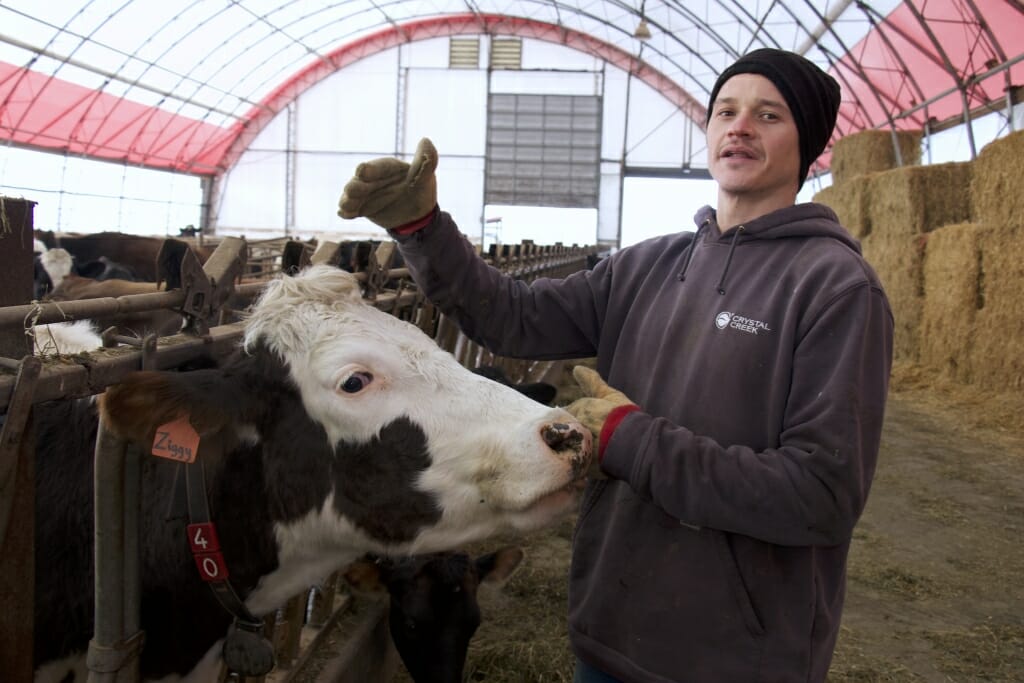 Andy Jaworski’s herd is small enough to have names, not just numbers. Ziggy, as Jaworski observes, is an outgoing, curious type. Photo by David Tenenbaum

GREEN BAY – Andy Jaworski is milking – as usual, as always. Though he only milks 65 cows at his farm just west of town, it’s almost 11 a.m., and cows are lining up at the milking stall.

For someone who is always milking, Jaworski seems pretty laid back. Some cows, lured by the relief of an empty udder – or the ration of grain they are offered upon entering the milking stall — visit the robotic milker three or more times a day.

Others visit less often, but either way is fine with Jaworski, who saw automation as a key to his plan to begin dairying on his parent’s farm about eight miles west of Green Bay.

Jaworski began milking his cows in 2014, using a business plan heavily shaped by the Wisconsin School for Beginning Dairy & Livestock Farmers, one of several “Short Courses” Jaworski started at the UW–Madison College of Agricultural and Life Sciences in November 2008.

Like the other CALS short courses, the School is a direct, focused, practical, “what you need to know” operation, says school director Nadia Alber. 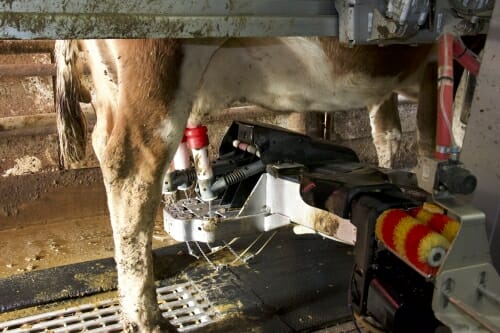 At a cost of about $230,000, this robot milker handles Jaworski’s entire herd… at any time of day or night. But like any farm machine, it has some off days, too, says Jaworski. Photo by David Tenenbaum

“The principal task of WSBDF is to write a business plan, to develop a set of goals, build a team around those goals, and choose where to make the first capital investments. We focus on the idea that a livestock farmer should invest first in the animals, not in machinery, buildings or land,” adds Alber, a part-time livestock farmer in Iowa County.

“Equipment depreciates,” Jaworski says, “while livestock reproduce. I was pretty focused on making an educated decision, that was a big part of the program in Nadia’s class.”

Jaworski had already decided to graze his cows, to reduce costs for equipment and fuel, but his analysis showed a benefit to automation. “I had visited a robotic milking farm, and it seemed to go against the grazers’ philosophy of low cost, and so I initially dismissed it. But after comparing to the cost of building a new milking parlor, the robotic system would only cost me an additional $50,000.  Once I factored in the labor savings, the return on investment looked more promising. In essence, I came to the conclusion that with the robot, you are paying for the milking labor upfront.”

Jaworski adheres more closely to other school tenets. For example, while pondering his “back to the farm” decision, he had worked as a relief milker, to assess whether he really liked the “workstyle.” Then he entered into a cost-and revenue-sharing agreement with the farmer whose cows he had been milking, allowing him to minimize his initial expenses.

As mentioned, Jaworski concentrated on grazing, pasture and forage,  greatly reducing feed and equipment costs. And he joined the CROPP Cooperative, owners of the Organic Valley brand, which pays a premium over the national bulk-milk price.

“We strongly encourage students to stay out of the commodity markets, that’s where all the doom and gloom is coming from,” says Richard Cates, a professor emeritus of soil science, who founded the beginning farmer course in 1995. “We say that new markets are emerging, partly because of the public’s interest in how food is raised and who raises it. Depending on your passion — llamas, cows, wine – you can identify a market with some upside potential. The value-added markets are blossoming – think of specialty cheese, the new hard cider market, or grass-fed beef.”

These decisions, and a dozen more – largely outcomes from the business plan Jaworski wrote 10 years ago – help explain why, in a year when a record 7-plus percent of Wisconsin dairy farms quit the business, Jaworski is serenely running the farm rather than running to meet his banker or planning the next expansion.

“Perhaps if I had a family, I would need to expand, but for me, for now, this herd meets my needs,” he says.

“We are all going to make a lot of mistakes as we learn the trade and build the business,” says Cates, who raises grass-fed beef in Iowa County, “by borrowing way too much money or purchasing a herd that is going to get sick and die, but the core, the big idea, is to keep them from making the big mistakes.”

The Wisconsin School for Beginning Dairy & Livestock Farmers, is a cooperative effort of the Center for Integrated Agricultural Systems and the Farm and Industry Short Course, both at the UW–Madison College of Agricultural and Life Sciences. The school is offered in-person and online, in 16 two-hour sessions, starting in early November.