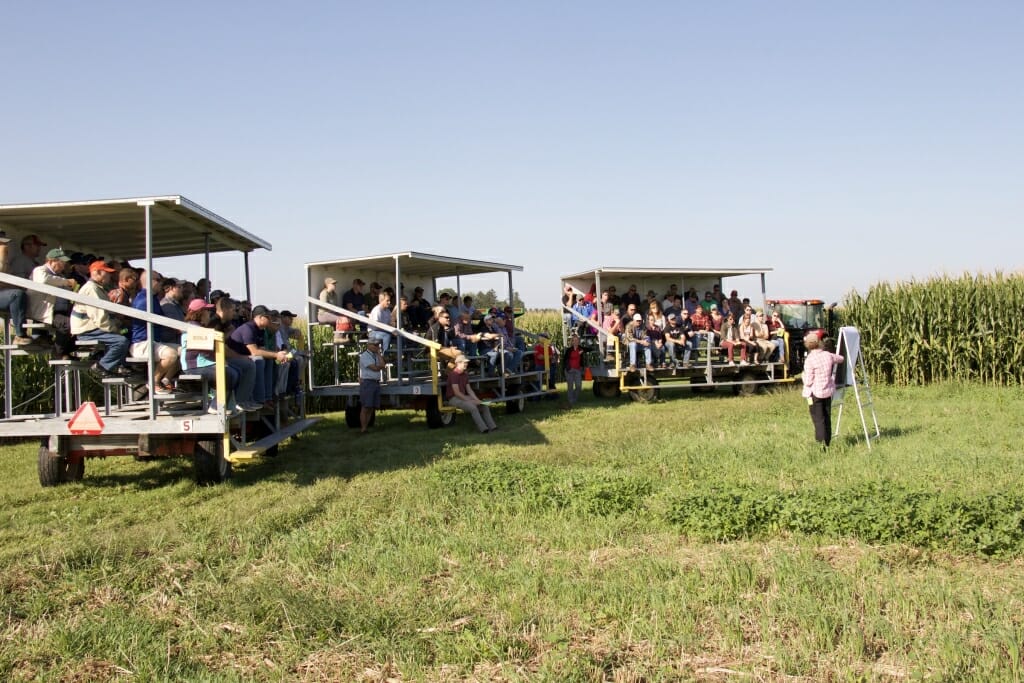 The College of Agricultural and Life Sciences holds field days at its 11 agricultural research stations throughout the state to spread research and insight into farm issues.

Discussing a three-year study of nitrogen fertilizer for corn, soil science professor Carrie Laboski compared one application at planting time to two applications, one at planting and a second later in the season. She found no profit advantage on the well-drained soil at Arlington, but there was often a benefit to sidedress applications on the slower-draining soil at the Marshfield Agriculture Experimental Station. 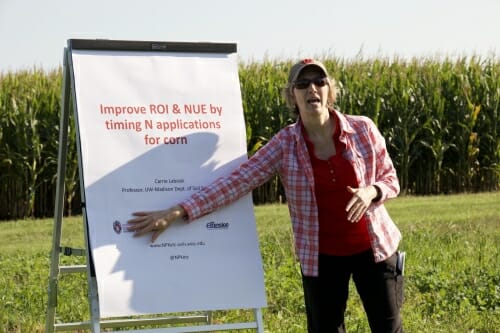 The rising trend toward “precision agriculture” may suggest that farmers change fertilizer applications on the fly. However, Laboski says “not everyone can afford this technology, but everyone can consider soil properties and make unique management decisions for each field to improve profitability.”

The field-day audience at UW–Madison’s agricultural stations has changed over the years, Laboski says. “Lots of people think we are serving farmers directly, and we are, but we also have the multipliers among crop consultants, ag retailers, county extension agents, and people who work for county land conservation or other agencies. Even when I am not talking to farmers directly, they are still receiving information and decision-making tools developed from my research.”

Crop consultants do much of the planning and evaluation for farmers, says Scott Hendrickson, a private crop consultant who attends to 6,500 acres around Manitowoc and Sheboygan. “I’ve been coming for 35 years, and it’s very helpful to come down here every year and get the latest updates about what is going on with many different crops. I take this information back to my growers, and we’ll implement what we can now, and will return later to a lot of things that are in progress. This is an event that we look forward to every year.” 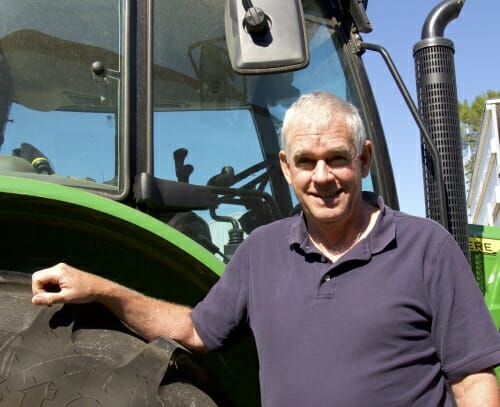 “I’ve been coming for 33 years because it’s very good information, cutting edge, some of the latest research that we can take home and apply,” says Jeff Polenske, president of Tilth Agronomy of Appleton, which consults on about 250,000 acres in Wisconsin. “Some of the data may be a bit raw, fresh, but it’s stuff that we find extremely valuable.” Photo by David Tenenbaum

Some of the most complex talks concerned the subject of soil health. Soil scientist Matt Ruark described new attempts to measure soil organic matter – a key support for the microbes that aid plant nutrient availability.

With three graduate students, Shawn Conley, a soybean specialist and professor of agronomy, discussed preliminary results on the essential bacteria and fungi to crop health and yield. The group raised the possibility that microbe transplants may eventually be used to sustain healthy, productive crops.

The event focused largely on “news you can use,” for Wisconsin farmers. Andrew Stammer, for example, director of the UW–Madison soil and forage analysis lab located at the Marshfield agricultural research station, described soil-sampling protocols for farmers who apply fertilizer in strips along the crop row.

However, the days did include a foretaste of the future, as associate professor of agronomy Heidi Kaeppler described the new Wisconsin Crop Innovation Center. Kaeppler, an associate professor of agronomy, is the center’s Research lead for genome engineering and gene editing. Housed in a cutting-edge Middleton facility donated by Monsanto “with no strings attached,” the Center performs conventional genetic engineering and the fast-growing technique called “gene editing” to improve crops, for example, crop yield or disease resistance. “These techniques are exacting, and they require a great level of scientific expertise and technical equipment and abilities,” says Kaeppler. 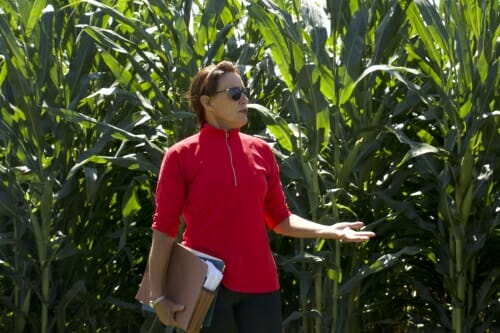 The Center is used by scientists from UW–Madison and around the world, Kaeppler adds. “We are one of the largest and most capable public facilities in the United States for doing transformations that are a central aspect of crop innovation and improvement.”