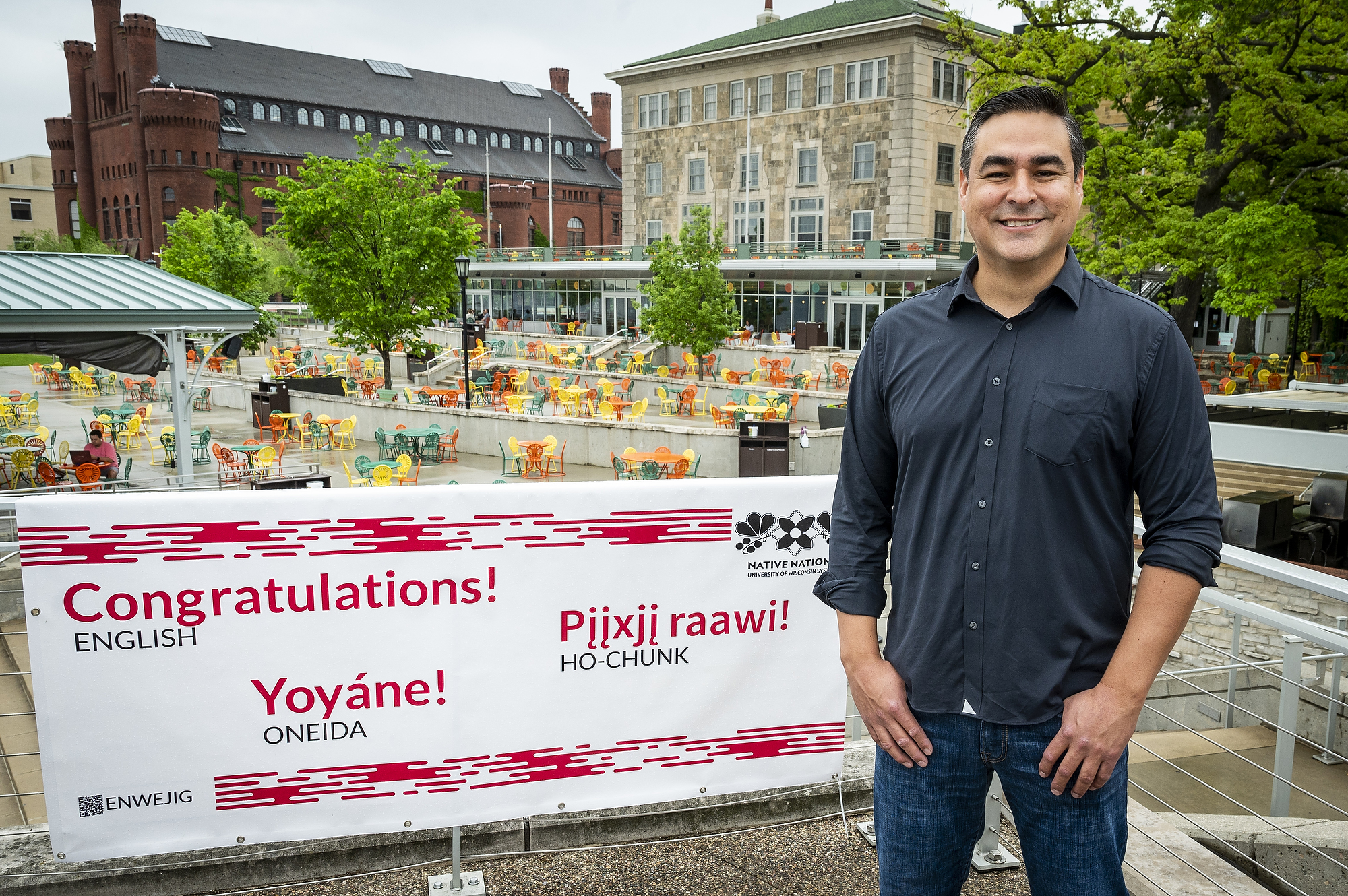 Brian McInnes, an associate professor and member of Enwejig Indigenous Language Advocates, is pictured with a banner featuring the word “congratulations!” written in English, Oneida and Ho-Chunk at the Memorial Union Terrace. Photo: Bryce Richter

As UW–Madison graduates celebrated commencement this spring, banners and yard signs around campus congratulated them in the Indigenous languages of the state, including Ho-Chunk and Ojibwe.

The signage was a project of Enwejig, an Indigenous languages group that formed about a year ago on campus.

“Our primary goal is to bring awareness of the importance of Indigenous languages to the university community and to enhance the university’s commitment to teaching the languages and working with Indigenous communities on language reclamation,” says Monica Macaulay, a professor of language sciences.

Enwejig (pronounced ain-WAY-jig) is an Ojibwe word that means “those who speak.” The name honors the speakers and learners of Indigenous languages, says Brian McInnes, an associate professor of civil society and community studies/American Indian studies.

“Our dream scenario is for Indigenous languages to become so normalized that people no longer think of Indigenous words as foreign or exotic, but rather see them as belonging as much or even more so to the culture and history of Wisconsin as English words,” says McInnes, a citizen of the Ojibwe and Potawatomi nations.

The Enwejig effort builds on language reclamation work that has been ongoing for decades at UW–Madison, McInnes says. In particular, he mentions the work of Rand Valentine, a linguistics professor and specialist in Ojibwe who recently retired.

More broadly, the Native Nations_UW Working Group has been partnering with Native Nations in Wisconsin since 2016 on a wide range of educational, research and outreach initiatives. In 2019, the university dedicated the Our Shared Future marker on Bascom Hill, which recognizes the land as the ancestral home of the Ho-Chunk people. In an 1832 treaty, the Ho-Chunk Nation was forced to cede the territory, a place they call Teejop (Dejope, or Four Lakes).

For commencement, Enwejig placed three banners at Memorial Union and eight yard signs along a stretch of West Johnson Street. Each offered expressions that roughly translate as “congratulations” in the indigenous languages of the state (Ho-Chunk, Oneida, Ojibwe, Potawatomi, Menominee, Munsee), plus Navajo.

The group hopes to make the signage a regular part of commencement. Funding came from the Office of the Chancellor and the American Indian Studies Program.

“We want Indigenous students to know that their ancestors are still speaking to them and to carry that with them as they go out into the world,” says McInnes, who heard about a similar effort with signage at UW–Green Bay and brought the idea to the campus group.

Spring graduate Marissa Mari Fernandez, 24, of Wisconsin Dells, Wisconsin, was traveling around Madison with her 3-year-old daughter, her mother, and other members of her extended family when she saw the yard signs. 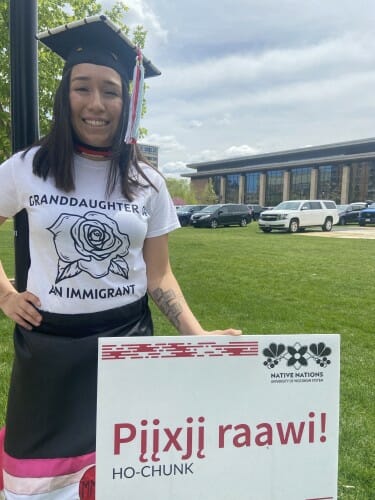 “We all hopped out of the car to get a closer look,” says Fernandez, who earned a bachelor’s degree in special education. “We are all Ho-Chunk, so it meant so much to all of us.”

Being at UW–Madison was difficult at times, Fernandez says.

“Although they do have a club for Indigenous students, I had limited time to be involved because of my daughter and working,” she says. “There have been more times than I can count where I did not feel that the Indigenous community was thought of regarding decisions, curriculum, or actions on UW’s end. To have this sign was a small but meaningful gesture in that struggle.”

The signs are just one example of what the group hopes to achieve. Members also are working to:

Long-term, Enwejig members hope that UW–Madison could one day offer majors and certificates in Indigenous languages and Indigenous languages reclamation, McInnes says. He taught beginning Ojibwe last fall to 45 students, about half of whom took intermediate Ojibwe with him this past spring.

“Most of the students were not Indigenous, and it was heartening to see so many of them want to continue with intermediate Ojibwe,” he says. “It was such a pleasure to work with them and to see their interest in and engagement with an Indigenous language.”