The University of Wisconsin–Madison and the 12 Native Nations in Wisconsin met May 10 for a day of discussion about new and ongoing partnerships to improve health services, preserve the environment, develop local economies, strengthen families, and expand educational opportunities.

Among the announcements at the Native Nations_UW Leadership Summit: the university and the Tribes will collaboratively pursue the creation of a culturally responsive research center on indigenous issues, and UW–Madison will hire a tribal relations liaison to identify opportunities and facilitate communication between UW–Madison and tribal governments in Wisconsin on matters of shared interest. The position will jointly report to the Office of the Vice Chancellor for University Relations and the Division of Extension.

“It’s wonderful to see the enthusiasm in this room — and back on campus — as we explore ways we can work more closely together,” UW–Madison Chancellor Rebecca Blank said.

The summit in Madison was the second such gathering for university officials and representatives from 12 tribes. About 80 people attended. 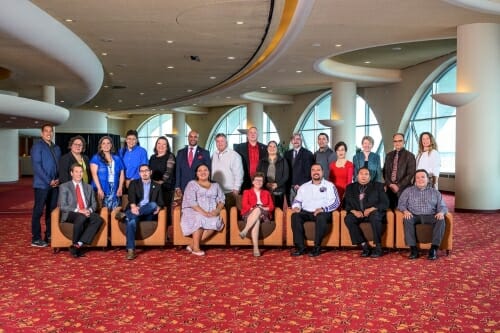 The first summit, in 2015, was convened as a centennial event commemorating the Society of American Indians’ visit to campus in 1914. This led to the creation the following year of the Native Nations_UW Working Group. The group was charged by the provosts of UW–Madison, University of Wisconsin Colleges, and the University of Wisconsin Extension to partner with Native Nations in Wisconsin on a range of educational, research and outreach initiatives.

“I really like that we’re here today, and I’m really encouraged by what’s going on,” said Mic Isham Jr., executive administrator of the Great Lakes Indian Fish & Wildlife Commission and former chairman of the Lac Courte Oreilles Band of Lake Superior Chippewa. “The partnership feels genuine. I think it will have valuable benefits, and not just on the research end, but also in how many Native students are at UW–Madison and how the university can better support them.”

Thomas Boelter, administrator of education and culture for the Forest County Potawatomi, said the most important thing is that everyone is together in the same room.

“We won’t be able to get anyplace until we at least begin the dialogue, so I believe there’s hope for the future,” he said. “I believe the UW System can help the Tribes as much as the Tribes can help them. It can be an equal partnership.”

The idea for an indigenous collaborative research center has been developing on campus for decades, said Jessie Conaway, co-chair of the Native Nations_UW Working Group and a faculty associate at the Nelson Institute. A draft planning proposal describes the governance structure as an advisory board with 50 percent representation from Native Nations and the university.

The center would build culturally responsive research capacity on campus, develop research opportunities for students, facilitate joint grant-writing opportunities, and ensure that the research is community driven and results in local benefits for Tribes.

“The center can help us build more robust research collaborations involving and supporting tribal communities, particularly in Wisconsin but throughout the Great Lakes Region,” Blank said.

Feedback on the proposed center was largely enthusiastic, with caveats. Patty Loew, a professor in the Medill School of Journalism and director of the Center for Native American and Indigenous Research at Northwestern University, said such a center, to be culturally sensitive and responsive, will need to operate differently than UW–Madison’s many other research centers. Everything from the way funds are secured to how research results are used will need to be addressed, said Loew, who has a deep history with UW–Madison and the working group.

“The university is really going to have to think about structurally changing the way it does research if it really wants to partner with Native people,” she said.

Jessica Ryan, a tribal council member with Brothertown Indian Nation, said she appreciates that all 12 tribes are at the table and that they are being included in every stage of development, including the brainstorming phase. Too often, tribes are consulted only toward the end of a planning process, she said.

“I’m grateful for the conversation from the outset — the dreaming — and I ask that you continue that so that we can come together in a meaningful way,” she said.

The summit also served to renew existing commitments. Several faculty members and students showcased projects that are helping the university meet the priorities set out in the working group’s strategic plan. Among those priorities, the university: