Award-winning climate reporter Justin Gillis will visit the University of Wisconsin–Madison as the spring 2018 Science Writer in Residence.

Throughout nearly a decade reporting on environmental science and climate change at The New York Times, Gillis twice traveled to Antarctica to chronicle ice sheets in danger of collapsing, covered the conference that created the Paris climate accord and was the principal author of the climate-solutions series “The Big Fix.” His Times series “Temperature Rising” won the John B. Oakes Award for Distinguished Environmental Journalism from Columbia University. 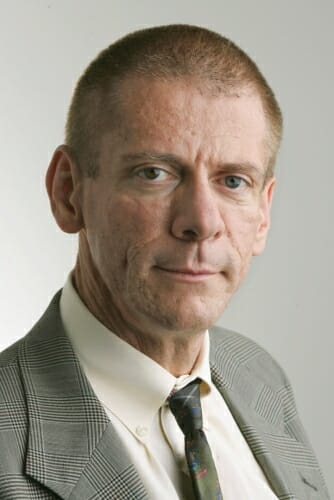 He is now working on a book about how to address global warming and is a contributing opinion writer for The New York Times.

Gillis will be on campus from April 23 to April 27 discussing climate change, environmental reporting and ethical journalism. He will give a free public talk as the keynote speaker for the annual conference by the UW–Madison Center for Journalism Ethics on Friday, April 27, at 9 a.m. in the Discovery Building, 330 N. Orchard St. (Registration is requested.)

In addition to his conference keynote, Gillis will discuss narrative in environmental reporting at the 12th Annual Nelson Institute Earth Day Conference at 1:45 p.m. on April 23 at Monona Terrace. And he will speak at a CleanTech Network forum in the Discovery Building at 4 p.m. on April 24. He will also meet with students, journalists and technology entrepreneurs.

A native of Georgia, Gillis graduated from the University of Georgia with a degree in journalism. Before joining the Times, he worked at the Associated Press, The Miami Herald and The Washington Post. In 2004 and 2005, Gillis was a Knight Fellow in Science Journalism at the Massachusetts Institute of Technology, where he first gravitated toward environmental and climate reporting.

For more than three decades, the Science Writer in Residence Program has brought to campus many of the nation’s leading science writers, including Pulitzer Prize winners. The program was established with support from the Brittingham Trust and continues today with support from the University of Wisconsin Foundation. The program is sponsored by the School of Journalism and Mass Communication and University Communications.