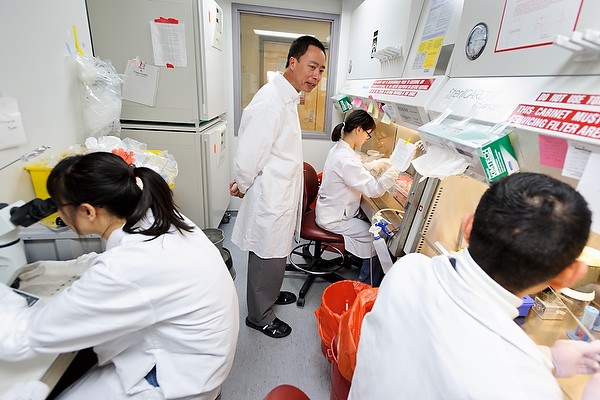 A University of Wisconsin–Madison neuroscientist has inserted a genetic switch into nerve cells so a patient can alter their activity by taking designer drugs that would not affect any other cell. The cells in question are neurons and make the neurotransmitter dopamine, whose deficiency is the culprit in the widespread movement disorder Parkinson’s disease.

Dopamine is a brain chemical essential for coordinated movement. Dopamine replacement, a standard therapy for Parkinson’s disease, usually loses its effect with time and, with the advent of stem cell technology, biomedical researchers have explored the notion of making dopamine-producing cells in the lab for transplant. And while doctors have tested dopamine cell transplants, the therapy often fails when the transplanted cells make either too much or too little of the essential neurotransmitter. 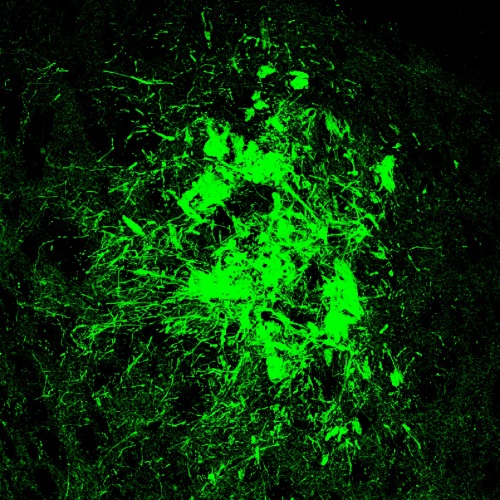 Su-Chun Zhang of the UW–Madison Waisman Center has transplanted human dopamine nerve cells into mice with a model of Parkinson’s disease. The new cells, shown in green, responded to two separate drugs that turned them on or off as needed. Image: Su-Chun Zhang

In a study published April 28, 2016 in the journal Cell Stem Cell, Su-Chun Zhang, a professor of neuroscience at the UW–Madison Waisman Center, created two related cell types. When they detect the designer drug, one type ramps up production of dopamine; the other chokes it off.

Zhang and co-first authors Yuejun Chen and Man Xiong grew the specialized nerve cells from human embryonic stem cells, which are able to form any of the 220 cell types in the human body. Their behavioral tests, designed to show when the Parkinson’s symptoms abated in the mice, confirmed that both the “up” and “down” switches performed as anticipated. The results suggest that it may one day be possible to resume dopamine neuron transplants to assist Parkinson’s disease patients.

But the ability to transplant cells that respond to regulatory drugs could have much wider application, says Zhang, who pioneered the transformation of embryonic stem cells into neural cells. “I’m a neuro guy, and the Parkinson’s disease model is very well established in mice — you can measure the outcome in their behavior. If the animal recovers, it must be due to the secretion of dopamine from the transplanted cell.”

Mice with a model of Parkinson’s disease received neural cells that could make dopamine. In the video above, the cells were activated with a designer drug, and the symptoms of Parkinson’s disappeared. The ability to turn in both directions shows that the transplanted cells were providing a useful level of dopamine.

In the second video, the mice turn only to the right, because they had received a drug that further activates transplanted cells. Both videos are three times normal speed.

Cells tend to have quite specific actions, and the ability to control them with benign drugs could find other uses, Zhang says. In diabetes, for example, “perhaps the beta cells that secrete insulin could be transplanted, and the patients could control insulin secretion with a designer drug.”

The current advance was built with a new, highly precise form of “gene editing” called CRISPR. The new technique replaces the scattershot method of moving genes with something that resembles the “find and replace” command in a word processor that puts the insertion only at the desired location.

Cell therapy was one of the most touted potential benefits of embryonic stem cells and the stem cells that were later derived from adult tissue (both technologies pioneered at UW–Madison), but few applications have reached the clinic as the technology continues to be refined and made safer. Control is part of the problem, Zhang says: “If we are going to use cell therapy, we need to know what the transplanted cell will do. If its activity is not right, we may want to activate it, or we may need to slow or stop it.”

Zhang considers the discovery one the most exciting in his substantial record of scientific firsts.

The mouse study showed both abilities, says Zhang, who anticipates that cells will also be engineered to contain switches that work in both directions.

Several major steps will be needed before the first clinical trial can be started. These include:

Such studies are already underway, he adds.

Despite those hurdles, Zhang considers the discovery one the most exciting in his substantial record of scientific firsts. After the engineered cells are transplanted into the mouse brain, he says, “we can turn them on or off, up or down, using a designer drug that can only act on cells that express the designer receptor. The drug does not affect any host cell because they don’t have that specialized receptor. It’s a very clean system.”

The study shows, for the first time with a human stem cell transplant, that because of this new technology of gene editing, you can remotely regulate the function of the transplanted cell, one that is reversible. If you take away the drug, it comes back.

Many other conditions could benefit from this approach, Zhang says. “This is the first proof of principle, using Parkinson’s disease as the model, but it may apply to many other diseases, and not just neurological diseases.”