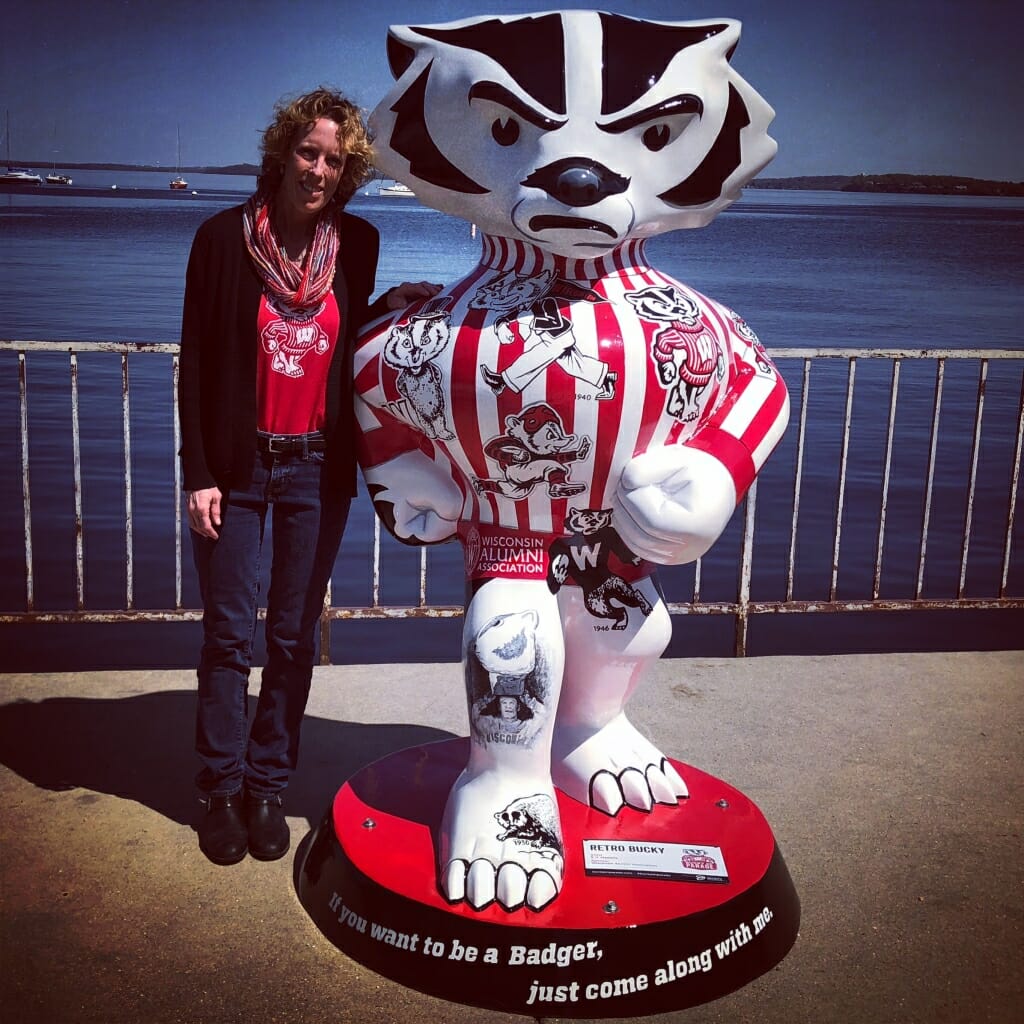 S.V. Medaris stands next to Retro Bucky, which she designed for the public art project Bucky on Parade. Retro Bucky is one of 85 unique life-size Bucky Badger statues located around Wisconsin. CREDIT: S.V. Medaris

What is your history as an artist?

I always wanted to be an artist, and due to that need and encouragement from parents and art teachers it became a reality. (I’ve been an) artist most of my life: BA in art from University of California, Santa Barbara (focus: ceramic sculpture), MFA at UW–Madison (focus: printmaking). I work as an artist – graphic designer, illustrator, web designer, etc. – for Media Solutions, within UW School of Medicine and Public Health over on the west side of campus next to UW Hospital. I’ve been there two years. Before that I was at The Why Files over in University Communications at Bascom. I’ve worked at the UW since 1999. What inspired you to come up with this take on Bucky?

We moved to Madison from Southern California when I was about 6 years old, when my Dad got a professorship in Geology. He’s professor emeritus now. That move to Wisconsin and my Dad starting at UW was also the start of my love for Bucky. I had a Bucky Badger sweatshirt that I wore, like, always. I was in love with that logo/image from the start. When my brother told me that Bucky was the statue on top of the Capitol … For a long time I believed this!

The Wisconsin Alumni Association gave me a couple of choices, and I jumped at their suggestion to do Bucky through the ages. Partly because ever since I was a kid I’ve loved Bucky, and as a graphic designer/illustrator getting to peruse and then render those wonderful old logos from early 1930s was a dream come true. The face was modeled after the current logo, exaggerating the scowl ever so slightly to accurately reflect the logo. 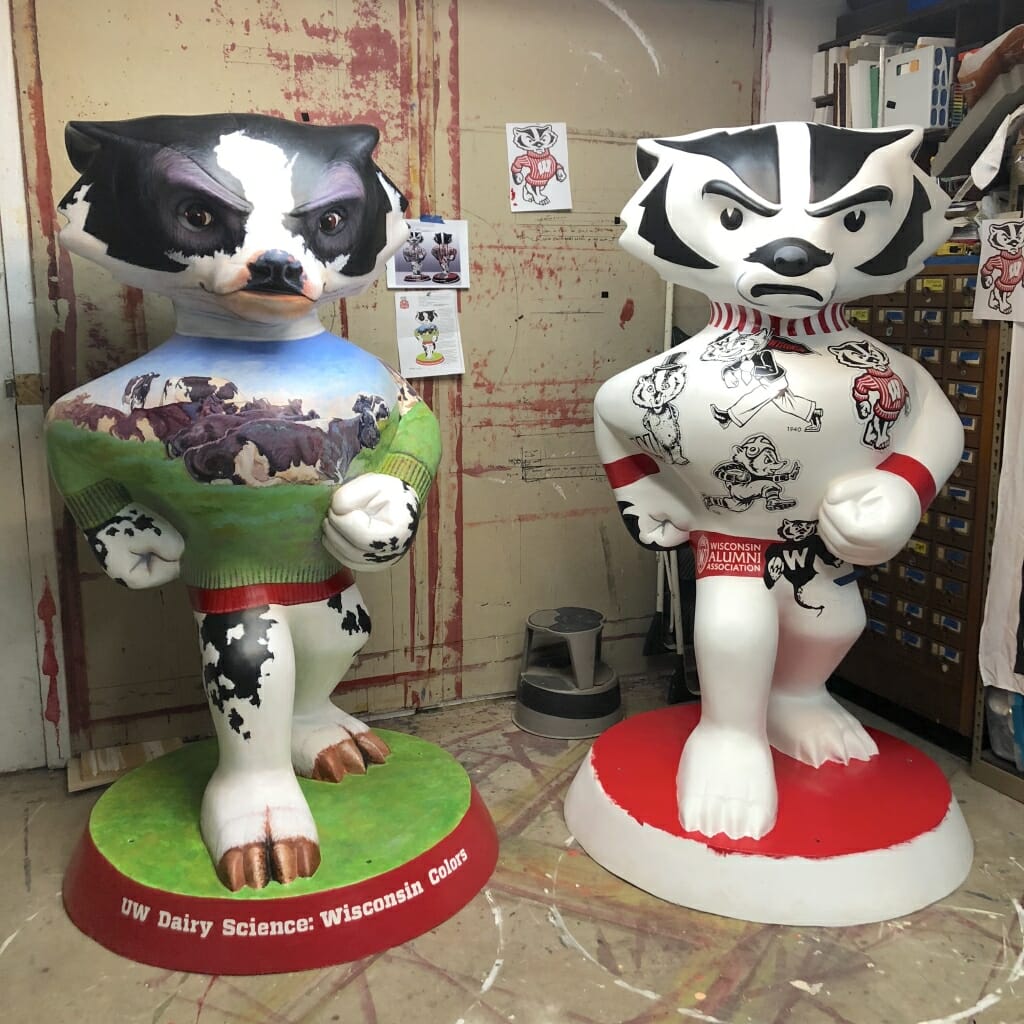 What idea or message do you hope people get out of this piece of art?

That Bucky’s been around spreading joy and university pride for a pretty long time. The first logo was 1930 – seen on Retro Bucky’s right foot. The first mascot was 1949, with that classic photo of the guy putting that first papier mache mask on. The logos have changed over time and the images have been athletic, cute, fierce. The mascot on the back of Retro Bucky, the modern day Bucky, is a reminder at how much fun the mascot is—constantly entertaining and getting people’s spirits up. 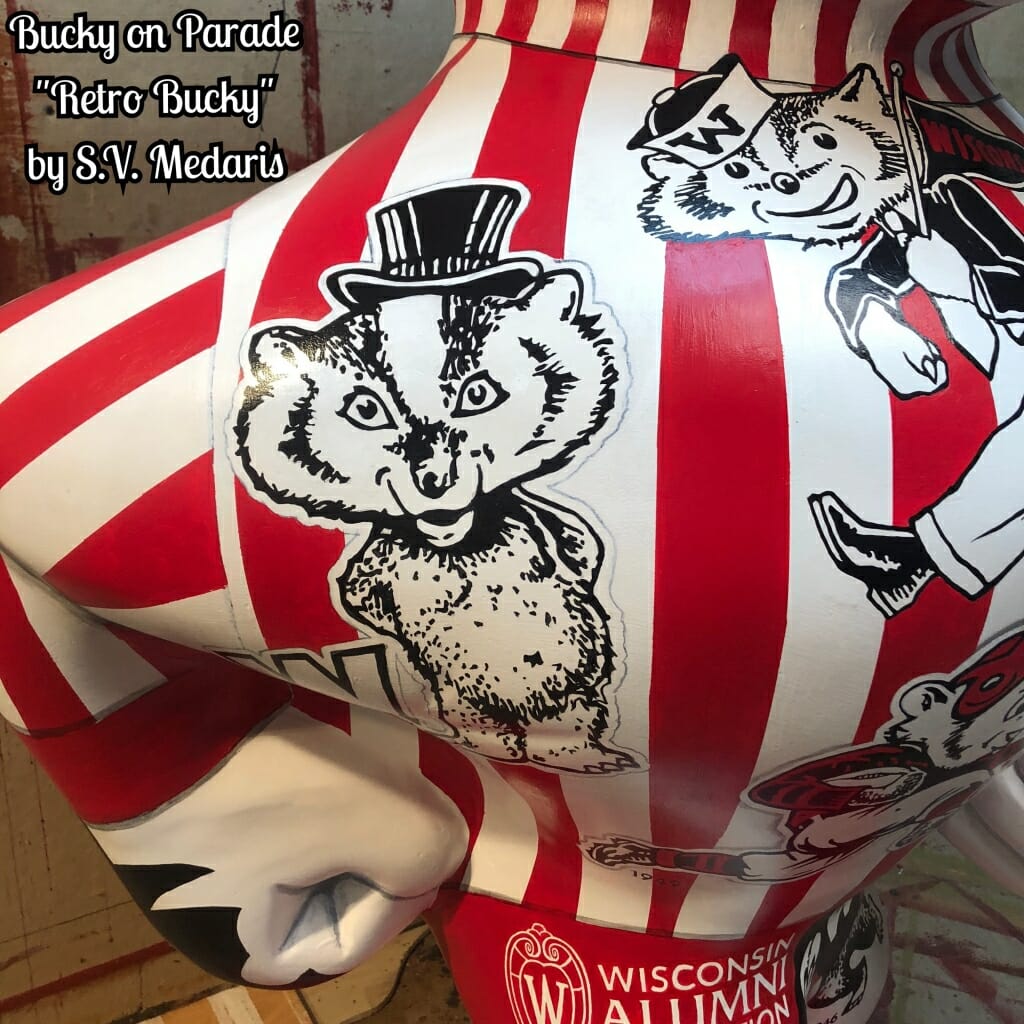 A close-up of one of numerous retro Bucky logos painted on Retro Bucky. CREDIT: S.V. Medaris

What was the process of creating your Bucky like?

I picked mine up kind of late in the game, since I had a solo show at the Museum of Wisconsin Art to prepare for. It went up in February, so I didn’t start my Bucky’s till March. There was also much back and forth with the Alumni Association about how big to make the text for the dates, which logos to use, wording on the base, etc. I like taking art direction, but it just made the process before the painting even started take a long time. It took me a few weeks with little sleep as I have a day job plus other art deadlines.

It was fun but took much longer than I anticipated. And it’s not like I haven’t done this before. I did two life-size cows for CowParade (including the Bucky cow at the University Bookstore); two life-size tigers and a chicken for the Zoobilee; a pony for the Parade of Ponies; and I’ve got my own cow and pig painted out in front of our house. Every time I do these I don’t budget enough time. Even with a strong, clear cut idea, it’s that the surface area all around the statue totals much more surface area than your average 6 foot painting.

Another full-circle-ish sort of thing: being in love with Bucky since childhood then painting Buckys on Bucky? Holy cow— childhood dream come true. My 6-year-old self would’ve flipped had she been told that one day she would paint a bunch of awesome Buckys on a Bucky statue. 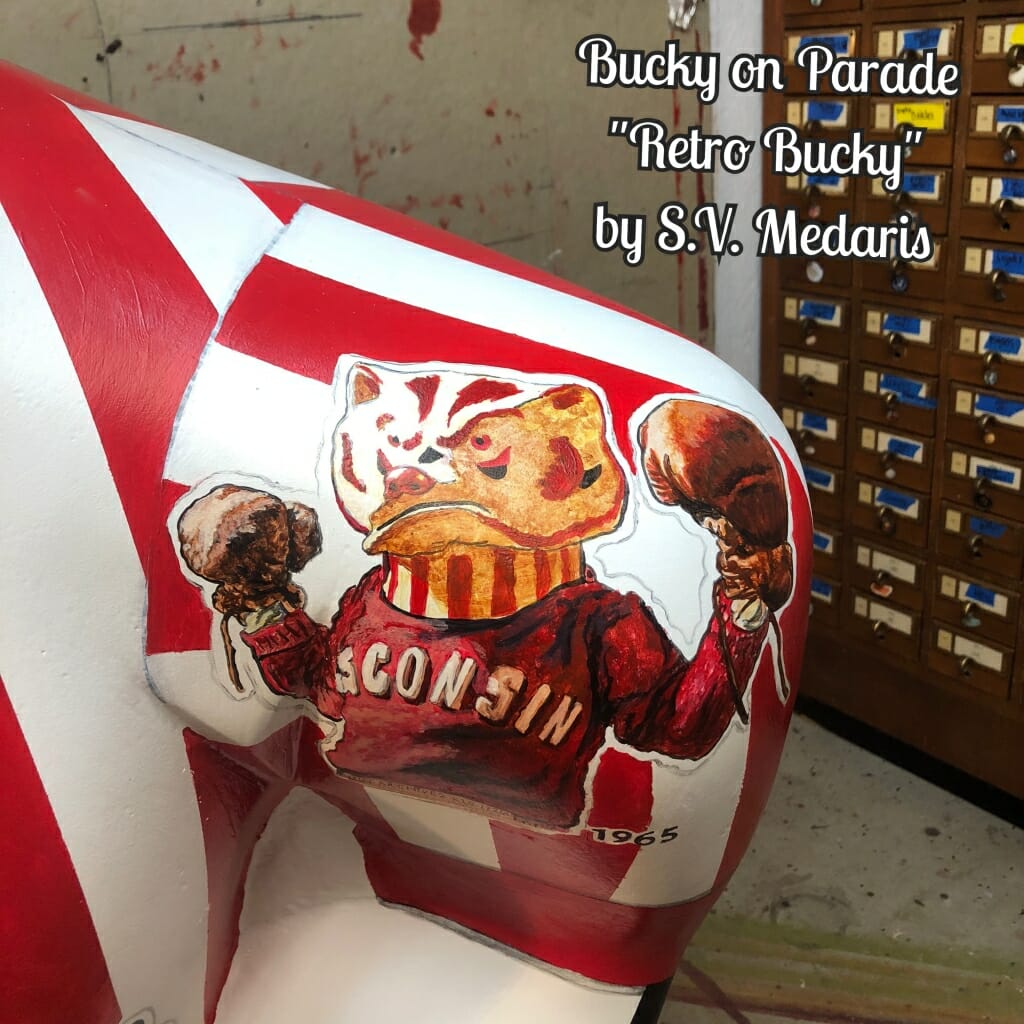 A close-up of one of the numerous retro Bucky logos painted on Retro Bucky. CREDIT: S.C. Medaris

Of the other Bucky Badgers created, which ones do you like best?

“Sconnie be Good” is friggin’ awesome. Michael Roberts is a friend, and he never disappoints. The amount of hours that went into his I’m sure was in the hundreds. Also the one by Phillip Salamone is amazing as well. Those are my top two favorites, but I liked a lot of them. The variety and level of craftsmanship of many was incredible.