Boundless Together: The research behind the commercial

A new commercial for UW–Madison premiered during the season-opening Badger football game on Sept. 5. Learn more about the cutting-edge research highlighted in the spot:

Buried over a mile beneath the Antarctic ice, the IceCube Neutrino Observatory is a one-of-a-kind particle detector devoted to studying cosmic neutrinos: high-energy travelers from outside our solar system. Scientists believe that cosmic neutrinos, also known as ghost particles, may be formed by powerful events such as black holes at the centers of galaxies, gamma ray bursts, supernovas, star formations, and pulsars. 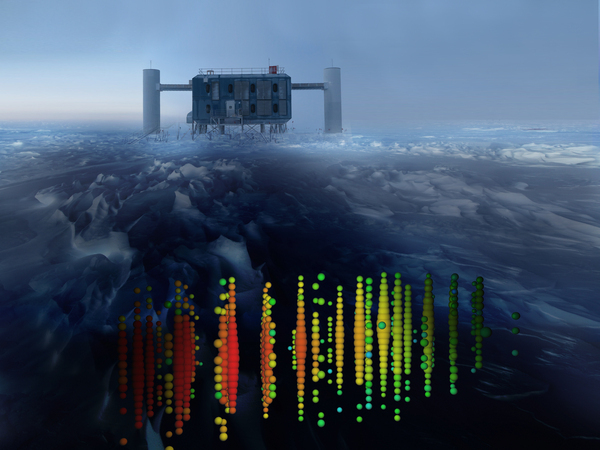 This photo illustration shows a high-energy neutrino event superimposed on a view of the IceCube Lab at the South Pole. Evidence of neutrinos heralds a new form of astronomy.

These nearly massless subatomic particles carry no electrical charge, which is what makes them so hard to detect. That’s why IceCube was built at the bottom of the world: the clear, abundant ice on Antarctica shields sensors from the distracting cosmic rays that bombard Earth’s atmosphere. With more than 5,000 optical sensors the size of basketballs, IceCube can observe and capture the light that occurs when a neutrino slams into another particle. The shape of that light tells researchers both the energy of the neutrino and the direction from which it came.

The elusive ghost particle may tell us a lot about our universe. Neutrinos could help us understand why the universe is built of matter rather than antimatter and provide clues to greater astrophysical mysteries such as dark matter, the invisible substance that scientists believe makes up over a quarter of our universe.

Read more about the latest findings by the IceCube Neutrino Observatory.

The chemistry of color:
Blue is the new green energy

Solar energy is hot right now, even though solar arrays are cumbersome, costly and — worst of all — inefficient. But Trisha Andrew, an assistant professor of chemistry, is developing solar cells made from a surprisingly common and inexpensive substance: a dye used to make the color blue. Weaving in and out of the stripes of dye in this solar cell are metallic threads, printed onto a square of tracing paper that fits in the palm of one hand. Learn more.

The same property that gives the dye’s molecules their intense color also lets them conduct electricity. And instead of requiring heavy glass-based solar panels and silver conductors, the densely pigmented dye can be woven with metallic threads and laid down in films thinner than a human hair.

On a medium as fine as tracing paper, Andrew and her team can make disposable solar cells that are lightweight, flexible and more affordable than ever before.

The technology could power everything from rooftop solar arrays to cell phone chargers and is portable enough for any situation where there is a need for quickly and cheaply gaining access to electrical power.