University of Wisconsin–Madison Chancellor Rebecca Blank told the UW System Board of Regents last Thursday that “demand for what we do at UW–Madison is higher than it’s ever been.”

Blank addressed the board at Varsity Hall in Union South and stressed the university’s partnership with the state. She said preliminary numbers indicate that undergraduate applications have increased by more than 20 percent this year, with increases in applications from Wisconsin (6 percent), Minnesota (17 percent), as well as nonresidents (approximately 30 percent).

“There are a lot of good things happening at UW–Madison,” Blank said. 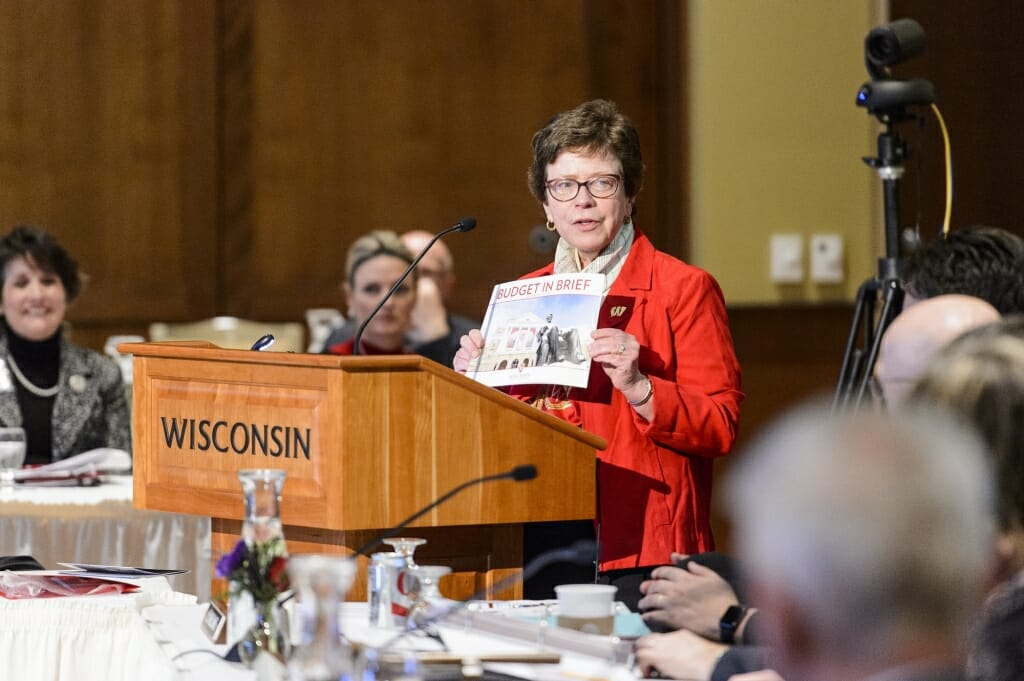 UW-Madison Chancellor Rebecca Blanks speaks during her presentation at the UW System Board of Regents meeting at Union South on Feb. 8, 2018. Photo: Bryce Richter

“UW–Madison is important to Wisconsin for many reasons, including its world-class education, research and outreach. It provides access to a world-class education for Wisconsin students at an affordable price — $10,533 a year for tuition and fees. The only higher-ranked public in the Big Ten is the University of Michigan. But if you’re a Wisconsin resident and want to attend Michigan, it will cost you more than $47,000 a year in tuition and fees.

“This access to excellence is important to keep our best students in this state. We are committed to making it possible for every qualified Wisconsin student to attend,” Blank said.

Each year, UW–Madison guarantees admission to a minimum of 3,600 Wisconsin students in its freshman class. This year that number topped 3,700, Blank said.

UW–Madison is focused on attracting the best Wisconsin high school students, she said. To recruit those students, the university has launched the PRIME program, which targets Wisconsin high school students with top grades and an ACT score of 30 or higher. The goal is to reach 800 students with high-touch recruiting to communicate why a top student would want to attend Madison.

“We’ve just started the program, but I think we’re on the right track,” said Blank, who had lunch with a group of students targeted by the program last week. “The more of these excellent students we attract to UW–Madison and keep in Wisconsin for college, the easier it’s going to be for Wisconsin’s businesses to recruit those students into jobs.”

To improve access for students from low- and middle-income Wisconsin families, the university introduced the Badger Promise a year ago. It guarantees a year of free tuition for first-generation students who transfer after completing a degree at a participating two-year UW college or technical school. This fall, 139 Badger Promise students enrolled at UW–Madison.

Furthering that commitment to Wisconsin students, Blank unveiled Bucky’s Tuition Promise, which provides free tuition to undergraduate students whose families earn $56,000 per year or less. The median income for Wisconsin families is roughly $56,000.

“We want to make sure that all students from Wisconsin who are admitted to UW–Madison can afford to come,” Blank said.

The university continues to work on expanding merit aid as well as need-based aid, with low- and moderate-income families in Wisconsin the first priority. In December, donors John and Tashia Morgridge announced a gift of $10 million in matching money for need-based scholarships. When this match is completed, it will generate a $20 million endowment for need-based scholarships. The payout from the endowment will provide a substantial part of the funding needed for Bucky’s Tuition Promise.

UW–Madison is also exploring ways to continue to attract and retain nonresident and international students, Blank said. She said these students bring more diversity to the student body and improve the educational experience for Wisconsin students, while at the same time providing an opportunity to Wisconsin businesses to recruit top talent to work for them. She said one year after graduation, about 22 percent of nonresident students have jobs in Wisconsin.

“This in no way lessens our commitment to Wisconsin freshmen. But at a time when the number of Wisconsin high school students is stagnant or declining, growth is going to have to come from out of state,” she said.

“The university’s research enterprise, ranked sixth in the nation, helps Wisconsin businesses to stay on the cutting edge of technology, attracts new businesses to Wisconsin and spurs many startups. For every $1 in state investment the university returns $24 in economic activity across the state.

“We bring more than $1 billion into Wisconsin in federal and private research funding,” Blank said. “This is money that is largely spent in Wisconsin, primarily to create jobs and buy materials. Based on our research enterprise alone, we are one of Wisconsin’s largest employers and a major source of jobs and spending in the state, largely funded by outside revenues.”