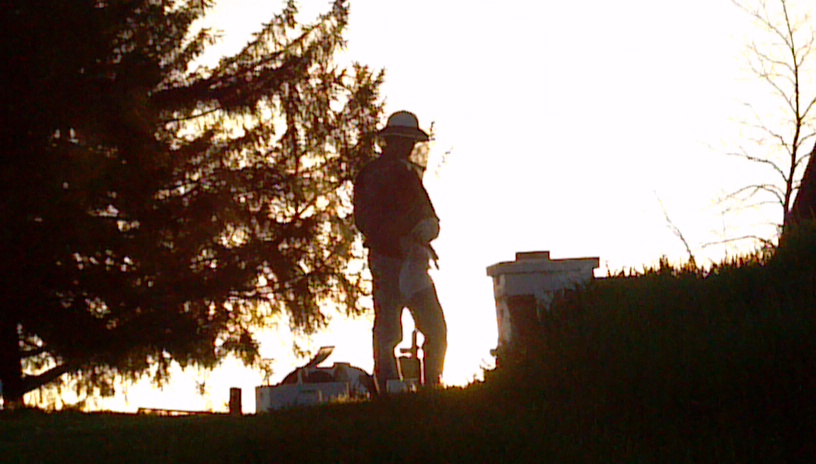 John Biondi tends to the bees on his Mineral Point cider farm. Biondi will venture into the cider business full-time when he leaves the Discovery to Product program at UW–Madison. Photo: Deirdre Birmingham

After three years of helping others start their own companies, John Biondi is leaving his position as director of Discovery to Product (D2P) at the University of Wisconsin–Madison on Aug. 31 to concentrate on his own business.

With apple season right around the corner, he is sure to be busy.

For nearly 15 years, Biondi and his wife, Deirdre Birmingham, have owned a 166-acre farm where they grow and select true cider apples to be used in their ciders and cider brandy. Their goal with The Cider Farm, located in Mineral Point, is to organically produce the finest cider apples that will, in turn, provide the ingredients for true ciders and cider brandies. True cider apples, unlike table apples, have tannins or acids, if not both, like a wine grape has.

“When we bought the farm, we didn’t know what to do with it at first,” Biondi recalls. “No one had lived there for more than 50 years and all of the buildings were long gone. But there were wild apple trees on the farm, so we knew that apple trees grew well there.” 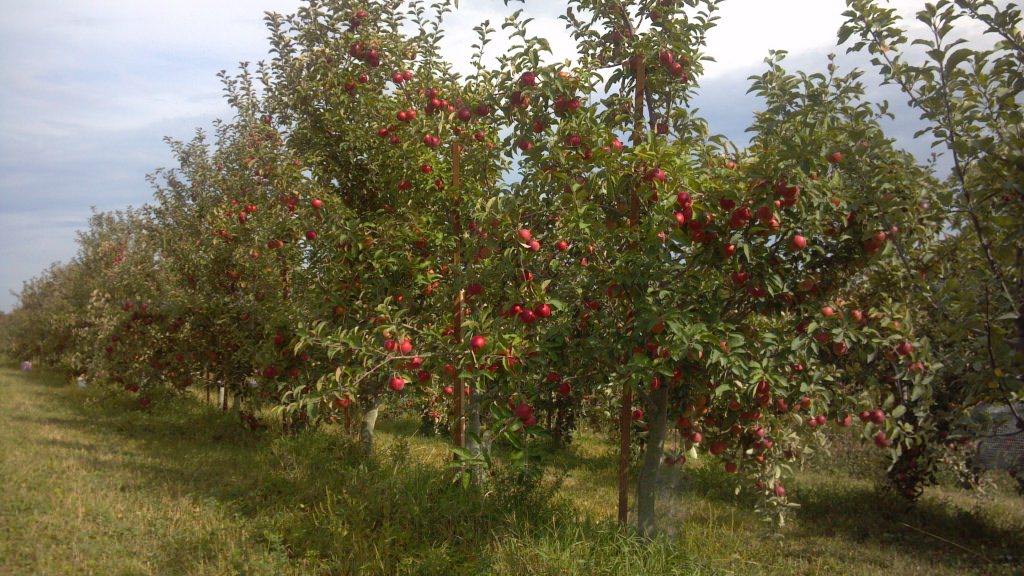 With that in mind, they decided to start an organic farm with an emphasis on the hard cider business.

“At the time, no one else was doing it,” he says. Fast forward to today and cider is one of the fastest-growing alcoholic beverage categories.

Because the varieties of apples they wanted to grow on The Cider Farm were not commercially available, Biondi and Birmingham — who has a Ph.D. in agriculture from UW–Madison and a master’s degree in soil science from the University of Illinois — painstakingly hand-grafted the trees that would become their orchard.

While Biondi says his weekends have been farm-filled ever since, for the last three years, his weekdays have also been devoted to getting UW–Madison’s Discovery to Product off the ground and running.

D2P staff have mentored students, staff and faculty towards technology commercialization, including patenting, partnership with industry, and new company formation.

At D2P, Biondi has shared his experience as a veteran entrepreneur who has worked in early-stage high-technology companies. Throughout his career, he has raised more than $60 million for six early-stage ventures in areas such as nanotechnology, medical devices, biotechnology, software and advanced materials.

D2P was created Sept. 1, 2013, through a joint memorandum of agreement between UW–Madison and the Wisconsin Alumni Research Foundation (WARF). D2P’s mission has been to provide a front door to entrepreneurs and innovators on campus to help them find and leverage resources, foster collaborations between UW–Madison and WARF, accelerate the commercialization of campus innovations, and help transform the campus culture to cultivate entrepreneurship, startups and commercialization of innovations. 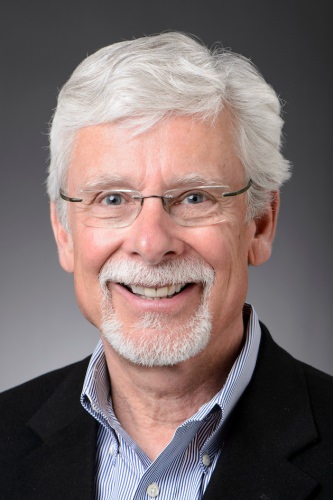 In November 2013, the D2P program received a $2.4 million Incentive Grant from the UW System to create Igniter, an education and award program to commercialize UW research and innovation.

“We are thankful for John’s leadership of D2P over the past three years, and in particular, his support of the Igniter education and grant award program,” says Marsha Mailick, vice chancellor for research and graduate education at UW–Madison. “This has been a significant accomplishment for a new campus program that we are excited to continue to support.”

Mailick has appointed Andy Richards, chief of staff for the vice chancellor for research and graduate education, as interim director of D2P.

D2P was first located in Bascom Hall and then moved to 1403 University Ave. in what may be one of the most aromatic office spaces around campus — it shares a building with a sub sandwich shop and a Chinese restaurant. Still, Biondi says it is a great location given its central campus location and close proximity to the School of Engineering, Wisconsin Institute for Discovery, College of Agricultural and Life Sciences and the Wisconsin School of Business.

In that space, the D2P staff have mentored UW–Madison students, staff and faculty towards successful technology commercialization outcomes, including patenting, partnership with industry, and new company formation, thus putting the Wisconsin Idea into action.

Under Biondi’s leadership, D2P has consulted with several hundred campus innovators, mentored more than 40 projects, and helped create 16 startup companies. Through one-on-one mentoring and workshops, D2P helps innovators take ideas born out of dorms and labs from technical proof of concept — to show the idea actually works — out to the market. D2P helps with financials, creating a business plan, or whatever is needed.

“I’ve enjoyed working with the researchers here at UW–Madison and having the opportunity to be a part of the university as an engine of economic development in the state.”

Among successful student projects in D2P’s client roster is one called Spectrom, developed by undergraduate engineers, that provides a method for 3-D color printing. Another, ReMex, commercialized a unique static mixing design that allows producers of resins and epoxies to mix fluids with greater efficiency, significantly reducing product waste.

D2P has helped commercialize multiple faculty projects across the life and physical sciences as well as the bio-agricultural and computer sciences area.

“I’ve enjoyed working with the researchers here at UW–Madison and having the opportunity to be a part of the university as an engine of economic development in the state,” Biondi says.

However, that contribution is not coming to an end, as this serial entrepreneur steps up his game taking his own ideas to market with The Cider Farm. The Cider Farm’s hard ciders are already on tap in select restaurants and Whole Foods Markets with tap lines in Madison, Milwaukee and Chicago.

Biondi, who refers to himself as the “chief tractor officer” on the farm, says he intends to keep busy putting more trees in the ground, moving and erecting deer fencing, establishing a prairie, reclaiming timberland from invasive species, and building on the business – maybe even taking it from kegs to bottles sometime soon.