Fetch Rewards, a company hatched by Wes Schroll while he was a UW–Madison undergraduate five years ago, is ramping up its introduction of a mobile app-based reward system for grocery buyers.

The system is based on a simple plan: First, a mobile device with the Fetch app photographs a grocery-shopping receipt. Then Fetch Rewards immediately credits the buyer with points that can be redeemed in a gift card or a cash card. 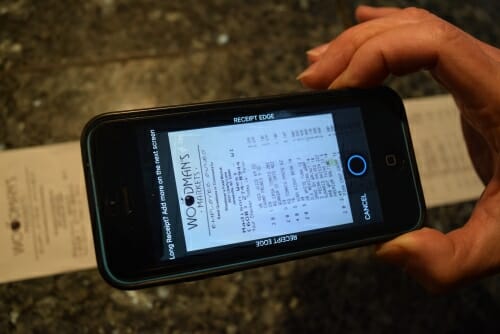 A receipt is photographed and transmitted via a cell phone’s Fetch Rewards app.

The system is free to the user. During a year of trial marketing, it has attracted 400,000 users.

The food companies do not learn about individual purchases, says Cooper. “Fetch can tie your purchase back to you, but no one else knows that Birk Cooper is buying crunchy peanut butter. Our partners can communicate to customers through us, but they don’t know who I am. Personally identifiable information remains with us, so your data is always kept safe.”

The arrangement benefits both sides. A firm introducing a honey-sweetened peanut butter could, for example, ask Fetch to target coupons exclusively to peanut butter addicts.

Fetch has more than 50 full-time workers. Most are in Madison, but 10 work in Chicago and three in New York. 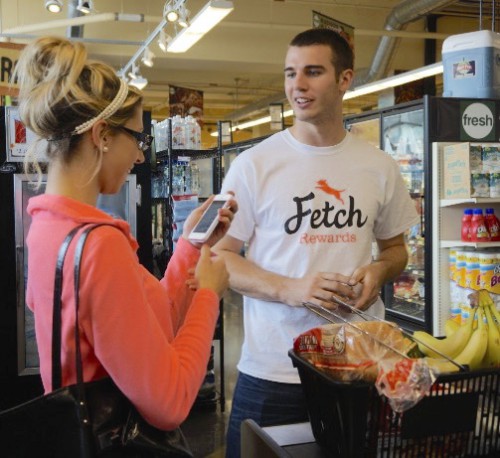 A UW–Madison student chats with Fetch Rewards co-founder Wes Schroll as she uses the app to buy groceries. Photo by Lauren Richards

Founder Wes Schroll says he came to UW–Madison in 2011, “mostly because I was attracted to the entrepreneurship programs. Out of the blue, I reached out to Jon Eckhardt,” now an associate professor of management, “and he took me on a two-hour tour of campus, showed me the different resources for entrepreneurs.”

Schroll left the university before graduating to work on Shop Fetch, a mobile-based app that gave users instant access to coupons and the ability to bypass supermarket checkout lines. Although Shop Fetch is now working at 35 stores, its acceptance depended on supermarket approval. “We have a good product, but the market isn’t ready to push it as hard and fast as we need,” Cooper says. “We had to figure out a way to go straight to the shopper.”

The supermarket industry has been reluctant to innovate, but Amazon’s purchase of Whole Foods, “started to put pressure on the market to give the shopper a better experience,” Cooper says. “Now, we are seeing retailers say, ‘We better figure this out.’”

Fetch’s first incarnation, Shop Fetch, attracted attention from the food giant Kraft Heinz for its ability to “know the customer,” Cooper says. “They came to us, said ‘we love what you do with Shop Fetch, but we have this house of brands, from Oscar Meyer to Maxwell House. How can we connect to our shoppers?”

Fetch Rewards is, by design, free and easy. “You make the purchase, scan the receipt and we take that data and use it to give you a better experience,” Cooper says. “By knowing what you scan, what you buy, we start to pick up on patterns and give you better offers.”

Customers earn some points for simply scanning a receipt, whether or not it contains eligible items. Only items on the Fetch brand list get extra points, Cooper says. 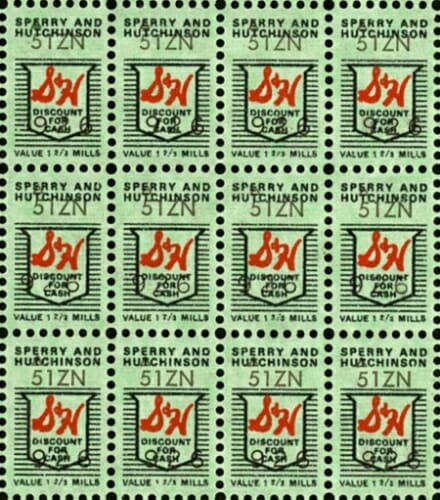 S&H Green Stamps were a rewards proram popular from the 1930s to 1980s. Distributed at supermarkets, gas stations and the like, the stamps were glued into books and redeemed for consumer products. At one point, maker Sperry & Hutchinson bragged that it was printing more stamps than the U.S. Postal Service. Courtesy of Pinterest

Using its knowledge about individual shopping patterns, Fetch Rewards is expanding beyond the points rewards to other services, Cooper says, such as the ability to write your shopping list.  “If I’ve been scanning all my grocery receipts, it may recommend that I am out of milk, or tell me, ‘Don’t buy paprika, you probably have enough.’”

Soon to come: recipes that allow you to add ingredients straight to your shopping list. Further down the line: Integration with various store e-shopping systems and automatic acceptance of e-commerce receipts.

Governing all these innovations is a reverence for simple.  “With this app, you can shop anywhere, scan the receipt and get rewarded for any of the brands that are in our app,” Cooper says. “No matter what you buy or where you buy it, you don’t have to clip a coupon or check deals or enter any code online. You don’t jump have to through hoops. You shop, you scan and you’re done.”

The company’s goal, he says, “Is to be in every aisle. We want to make it so easy to use, and make the saving so apparent, that it’s almost irresponsible not to be scanning.”

“We are obsessed with simple,” Cooper adds. “Too many companies compromise simplicity with tactics that might be better for them or their partners, but not for shoppers. You have to think about the shopper first. We want to be as frictionless as possible, as simple as possible.”