Petrochemicals, the oil- and gas-derived compounds that serve as the molecular backbones for much of modern commerce, commanded a $539.3 billion market value in 2018.

Replacing just a few of those petroleum products with chemicals made from plants or microbes could put a substantial dent in the world’s fossil fuel consumption.

That’s why a team of engineers from the University of Wisconsin–Madison developed a method to identify plant-based compounds that hold promise as potential replacements for petrochemicals. They published their results this month in the journal iScience.

“This will provide guidance for product design and discovery,” says Wenzhao Wu, who conducted the research before earning his doctorate in chemical engineering from UW–Madison in 2018 and now works in the corporate strategic research division of ExxonMobil. “It will also help the biofuels community focus on what chemicals to produce.”

Which chemicals to produce is a crucial question — and the answer could make or break whether biofuels are able to compete with the cost of petroleum.

“We study chemical production, in addition to fuels, to improve the economics of biorefineries,” says Christos Maravelias, a UW–Madison professor of chemical and biological engineering. “The logic is that converting biomass into fuel is relatively inefficient compared to oil and gas, but chemical production could be more cost-effective.” 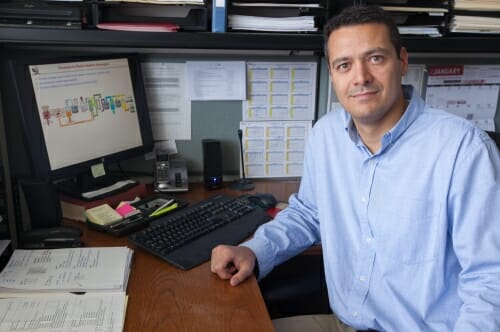 Oil and gas refineries produce a whole host of commodity chemicals alongside fuel products to satisfy an insatiable demand from numerous industries, including agriculture, pharmaceuticals and electronics.

Replacing some of those commodity chemicals with bio-based products could help chip away at our near-exclusive reliance on petroleum. In fact, Maravelias already studies which current-day commodity chemicals might be best produced from plant or microbial sources.

That relatively narrow, “current day” view doesn’t capture the wide array of chemicals that could be made from plants of microbes. So, the researchers sought a strategy to identify up-and-coming chemicals — bio-based compounds not yet in widespread production, but potentially capable of substituting for a petrochemical in use today.

The researchers dubbed the up-and-comers “replacement chemicals,” identified through a careful analysis of everything from market volumes and prices to atomic composition. 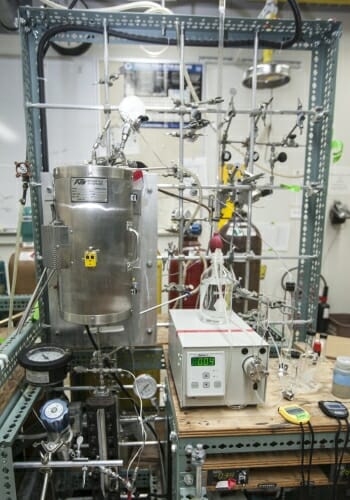 Biofuel flow reactors like this one break down plant materials into molecules that can be used as fuels or sold as commodity chemicals, and new framework could help chemical engineers find biological compounds to replace petrochemicals on today’s markets. Matt Wisniewski

As is the case with petroleum-based chemicals, replacement chemicals could someday be sold alongside biofuels. As a result, researchers needed to find compounds that could generate substantial revenue as coproducts.

They also considered demand. For example, numerous chemicals (such as the complicated molecules used to synthesize prescription drugs or pharmaceuticals) can command high prices, but those expensive compounds make up a tiny fraction of the total market.

“If biofuels are able to be adopted at a large scale, their coproducts should have significant demand,” says Maravelias. “If we were only producing specialty chemicals, there wouldn’t be a large enough market.”

Broadening the equation to include market volumes as well as prices, the researchers identified characteristics of chemicals that are both highly in demand as well as difficult to obtain from fossil fuels.

And by layering in a third step of analysis based on molecular structure, the researchers narrowed in on characteristics that enable successful bio-based chemicals to balance the tradeoff between price and demand—and, importantly, to be easily produced from biological sources.

They hope those characteristics will motivate other biofuels researchers to take the next steps: designing and developing plant- or- microbe-based pathways for synthesizing molecules that will become tomorrow’s replacement chemicals.

The work was funded through a grant to the Department of Energy’s Great Lakes Bioenergy Research Center (DE-SC0018409).