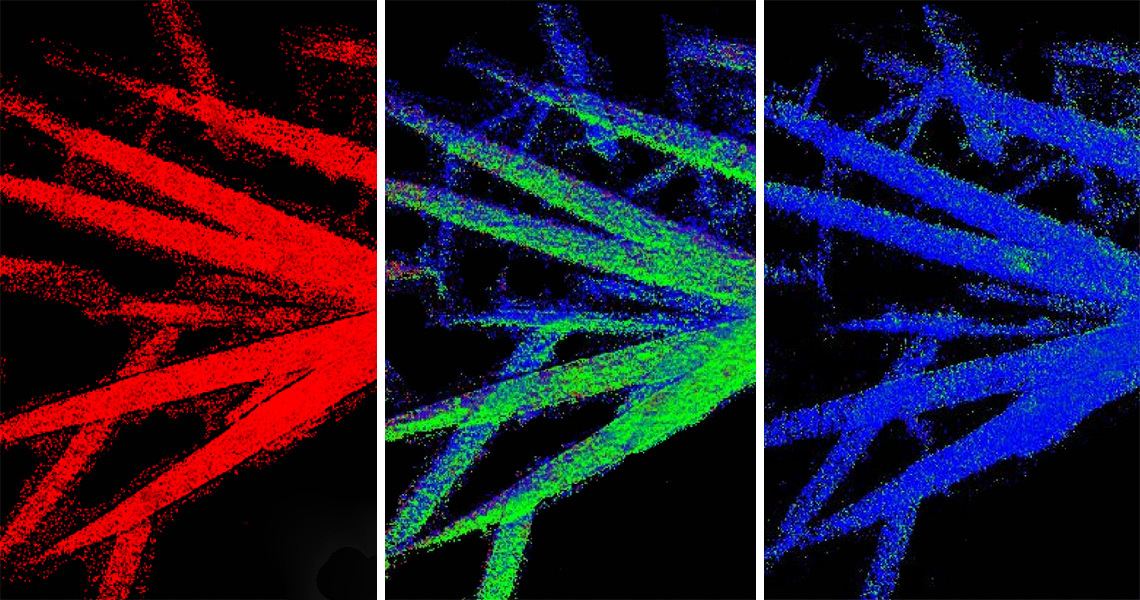 In a move that could improve the energy storage of everything from portable electronics to electric microgrids, University of Wisconsin–Madison and Brookhaven National Laboratory researchers have developed a novel X-ray imaging technique to visualize and study the electrochemical reactions in lithium-ion rechargeable batteries containing a new type of material, iron fluoride.

“Iron fluoride has the potential to triple the amount of energy a conventional lithium-ion battery can store,” says Song Jin, a UW–Madison professor of chemistry and Wisconsin Energy Institute affiliate. “However, we have yet to tap its true potential.” Graduate student Linsen Li worked with Jin and other collaborators to perform experiments with a state-of-the-art transmission X-ray microscope at the National Synchrotron Light Source at Brookhaven. There, they collected chemical maps from actual coin cell batteries filled with iron fluoride during battery cycling to determine how well they perform. The results are published today in the journal Nature Communications.

“In the past, we weren’t able to truly understand what is happening to iron fluoride during battery reactions because other battery components were getting in the way of getting a precise image,” says Li.

By accounting for the background signals that would otherwise confuse the image, Li was able to accurately visualize and measure, at the nanoscale, the chemical changes iron fluoride undergoes to store and discharge energy.

Thus far, using iron fluoride in rechargeable lithium ion batteries has presented scientists with two challenges. The first is that it doesn’t recharge very well in its current form.

“This would be like your smart phone only charging half as much the first time, and even less thereafter,” says Li. “Consumers would rather have a battery that charges consistently through hundreds of charges.” By examining iron fluoride transformation in batteries at the nanoscale, Jin and Li’s new X-ray imaging method pinpoints each individual reaction to understand why capacity decay may be occurring.

“In analyzing the X-ray data on this level, we were able to track the electrochemical reactions with far more accuracy than previous methods, and determined that iron fluoride performs better when it has a porous microstructure,” says Li.

The second challenge is that iron fluoride battery materials don’t discharge as much energy as they take in, reducing energy efficiency. The current study yielded some preliminary insights into this problem and Jin and Li plan to tackle this challenge in future experiments.

Some implications of this research are obvious — like using portable electronic devices for longer before charging — but Jin also foresees a bigger and broader range of applications.

“If we can maximize the cycling performance and efficiency of these low-cost and abundant iron fluoride lithium ion battery materials, we could advance large-scale renewable energy storage technologies for electric cars and microgrids,” he says.

Some implications of this research are obvious — like using portable electronic devices for longer before charging — but Jin also foresees a bigger and broader range of applications.

Jin also believes that the novel X-ray imaging technique will facilitate the studies of other technologically important solid-state transformations and help to improve processes such as preparation of inorganic ceramics and thin-film solar cells.

The experiments were performed with the help of Yu-chen Karen Chen-Wiegart, Feng Wang, Jun Wang and their co-workers at Beamline X8C, National Synchrotron Light Source, Brookhaven National Laboratory, and supported by the U.S. Department of Energy Basic Energy Sciences and a seed grant from the Wisconsin Energy Institute. The synthesis of the battery materials in Jin’s lab was supported by National Science Foundation Division of Materials Research.