UW-Madison geoscientist Andrew Zaffos explains the link between moving continents and changing numbers of marine species. Data from thousands of studies was assembled to paint a broad picture of biodiversity. Video: Andrew Zaffos and Shanan Peters

Continental drift and plate tectonics — the notion that large chunks of Earth’s crust slowly but inexorably shift positions — was proposed in 1912 but not accepted until the 1960s. These movements changed the face of the planet — pieces of the continents congealed into the “supercontinent” Pangaea about 335 million years ago and then separated about 175 million ago.

Scientists began to speculate about how these alterations would affect the formation and extinction of species and thus, what we call biodiversity. In 1970, James Valentine and Eldridge Moores of the University of California suggested that broken-up continents would create more ecological niches and promote favorable climate and environmental conditions that are conducive to biodiversity.

In the Proceedings of the National Academy of Sciences this week (May 15, 2017), two University of Wisconsin–Madison geoscientists have plumbed some of the broadest databases in geology and paleontology to show that their predecessors were on the right track: Marine species tend to become more numerous when the continents divide, and to stabilize — maybe even decline — when continents congeal. 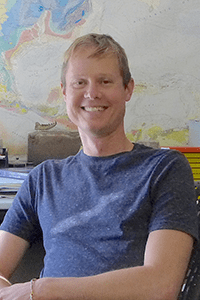 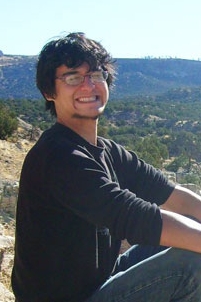 Their report focused on fossilized marine species in sedimentary rock, which are more numerous and easier to study than species that lived on land.

Shanan Peters, a professor of geoscience, Andrew Zaffos, a postdoctoral researcher, and collaborator Seth Finnegan at the University of California, Berkeley, correlated the degree of continental fragmentation through time, starting 541 million years ago, with the diversity of multicellular life, which expanded during the “Cambrian explosion.”

The researchers created an index to show relative continental fragmentation and then compared that index to global fossil data in the Paleobiology Database.

The result was as originally predicted, with a few twists. During and after periods of fragmentation, marine diversity increases. During consolidation, the brakes seem to be put on diversification and marine biodiversity tends to plateau.

The study was unable to determine exactly why the movement of continents affected biodiversity, but plate tectonics has both direct and indirect effects, Peters says.

Conventional ecological theory says that an isolated population will diverge from the original population, forming new species as organisms enter empty niches and as an increasing number of generations separate them from their common ancestor. This is one reason why modern islands have so many unique species. 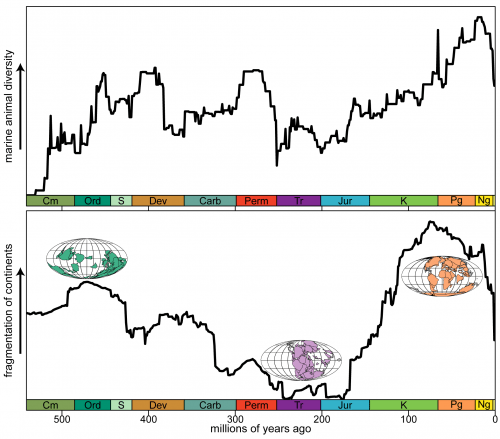 But the indirect effects could also be dramatic, Peters says. “People don’t think about it too much, but the arrangement of continents on Earth has a huge effect on ocean currents, atmospheric circulation, how strong the seasons are. A whole range of things about how Earth works is determined by the crust, and that crust moves on geological time scales.”

There is logic behind the idea that a consolidated continent would have lower diversity, says Zaffos. “The vast majority of marine diversity is on continental edges, in shallow seas. Before India slammed into Asia, there was more area of continental margin that could be occupied by marine life.” Fragmented continents also have more isolated animal populations and tend to have different climate regimes because the ocean, the source of water vapor, is closer.

There were plenty of complications in a study covering more than a half-billion years: The consolidation-fragmentation-consolidation cycle ran only one-and-a-half times; the asteroid impacts and climate changes that contributed to several mass extinctions also affected the number of marine species; and the increasing biodiversity in recent geologic times could be a reflection of better fossil preservation. However, Peters and Zaffos examined a database Peters spearheaded called Macrostrat that collates a vast number of geological studies of North America. “The North American sedimentary record provided a sanity check on our study, allowing us to control for potential rock record-related sampling effects,” says Zaffos.

“I was delighted,” says Valentine, first author of the 1970 study, who read a draft of the PNAS paper. “And by the way, the new study is a really fine paper, which adds satisfaction because those authors have put the concept on a very firm scientific basis and it seems unlikely that the basic idea can be successfully challenged now.”

The study found that marine species tend to become more numerous when the continents divide, and to stabilize — maybe even decline — when continents congeal.

Ironically, the study of marine fossils was a major springboard when Alfred Wegener developed the theory of plate tectonics early in the 20th century. In a delightful about-face, plate tectonics has now been used to explain changes in the diversity of marine animals over the last half-billion years.

When the linkage between tectonics and biodiversity was made in 1970, “it was largely a thought experiment,” says Peters. “There was some general information about the history of biodiversity, but there was very little data to test the idea. Only in the past decade or so have all the data come together in a way that makes a somewhat rigorous analysis possible.”

The trend in marine biodiversity started to fall a few million years ago, says Peters, who takes the long view of a geoscientist. “The fossil record of biodiversity seems to indicate that diversity has been decreasing for the past few million years, and that trend could continue. India has already collided with Asia, and Africa is impinging on Eurasia, so eventually the Mediterranean will close. If we lose a lot of species today, for whatever reason, on a geological time scale, it’s going to be harder to recover.”

Video caption: UW-Madison geoscientist Andrew Zaffos explains the link between moving continents and changing numbers of marine species. Data from thousands of studies was assembled to paint a broad picture of biodiversity.