Using radioactive elements trapped in crystallized, cream-colored “veins” in New Mexican rock, geologists have peered back in time more than 400,000 years to illuminate a record of earthquakes along the Loma Blanca fault in the Rio Grande rift.

It is the longest record of earthquakes ever documented on a fault, showing 13 distinct seismic events — nine of which occurred at regular intervals averaging 40,000-to-50,000 years and four that clustered together just five-to-11,000 years apart. 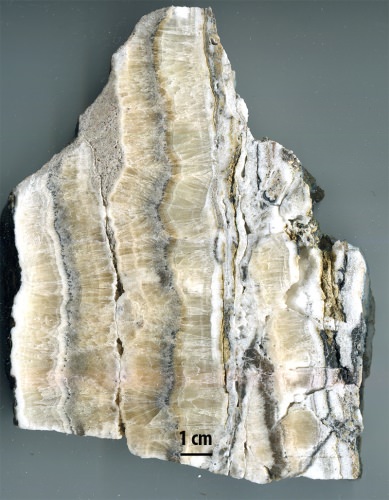 A polished slab of rock from the Loma Blanca fault in New Mexico, an intraplate fault associated with periodic earthquakes and an unusual cluster that occurred roughly 430,000 years ago. The rock shows evidence of fracture and healing in the white calcite deposits associated with earthquakes. Courtesy of Laurel Goodwin and Randy Williams

The work, described in a study published last week in the Proceedings of the National Academy of Sciences, was led by University of Wisconsin–Madison postdoctoral researcher Randy Williams and his advisor, Laurel Goodwin, a professor in the UW–Madison geoscience department.

“We weren’t expecting any of this,” Goodwin says. “It’s been quite the odyssey for us.”

The researchers initially set out to better understand the background, or default, earthquake activity along the 14-mile-long Loma Blanca fault, south of Albuquerque. An intraplate fault like this generally produces earthquakes much less frequently than those at the boundaries of tectonic plates, like California’s San Andreas Fault, and tends to be less well understood by geologists. However, some intraplate faults have experienced increased seismicity in recent years, likely due to deep injection wells used for wastewater disposal.

In places like Texas, Oklahoma and Ohio, Williams explains, earthquake activity has been linked to high-pressure wastewater injected far beneath Earth’s surface. In part to better understand these human-driven events, the researchers wanted to get a handle on what mechanical factors control natural earthquakes and how often a given fault slips to cause one.

“We can’t predict an exact date for when they will occur, and it’s unlikely that we ever will,” Goodwin explains, “but we want to understand what is driving them so we can better prepare.”

To look for answers, Williams began to examine “veins” made of the mineral calcite that streak segments of rock along the fault. Calcite precipitates out of pressurized fluids that travel through rock near faults during some earthquakes and gets deposited in layers, like rings of a tree. During subsequent earthquakes, the calcite fractures and heals, leaving a distinct signature like old broken bones.

Williams looked at the radioactive elements uranium and thorium trapped in these calcite crystals, using them as a kind of clock based on the rate at which uranium decays into thorium. He and the rest of the research team, which includes Warren Sharp from the Berkeley Geochronology Center and Peter Mozley of the New Mexico Institute of Mining and Technology, could measure the age of each “generation” of calcite found in the veins and determine when earthquakes occurred relative to one another. The magnitude of these earthquakes at Loma Blanca has been estimated to be between 6.2 and 6.9, by analogy with more recent events.

The team showed that earthquakes on the fault were controlled by two different processes. Earthquakes that occurred at regular intervals were the result of accumulated stress that eventually caused the fault to fail every 40,000 years or so but were not driven by fluids. However, the unusual cluster of earthquakes that occurred roughly 430,000 years ago was the result of an increase in fluid pressure deep beneath the surface. Increases in fluid pressure in the earth can decrease the friction between the two sides of a fault, leading to easier sliding — like the pressurized air on an air hockey table. 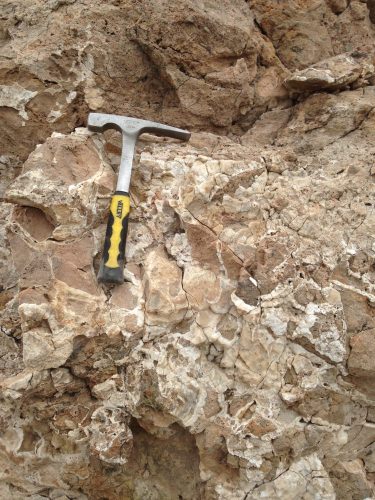 The white calcite “veins” of the Loma Blanca fault are evident in this slab of rock on the fault. These veins of calcite reveal a record of fluid-driven earthquakes clustered together on a fault typically characterized by less frequent, periodic earthquakes caused by mechanical stress. Courtesy of Laurel Goodwin and Randy Williams

The team also showed that calcite associated with two seismic events in the earthquake cluster indicates very rapid carbon dioxide degassing, which can occur when fluid under high pressure is released — like opening the top of a shaken bottle of soda.

“When pore pressure increases far enough over the background level, the fault fails and cracks form, releasing fluid from the basin,” Goodwin explains. Williams says that injected wastewater is likely to increase pressure at a faster rate than most faults have experienced in the geologic past.

The findings also help contribute to a longstanding question in geology regarding the mechanics of earthquakes in intraplate faults and whether they occur periodically or randomly in time.

Today, Williams is working to improve the methods the team used. “We want to understand how the calcite-dating method can be used to contribute to documenting the seismic record of other faults,” he says.

Funding for the study came from the Geological Society of America, American Association of Petroleum Geologists, the GDL Foundation and the Wisconsin Alumni Research Foundation. Additionally, partial support was provided by the American Chemical Society Petroleum Research Fund and the National Science Foundation.