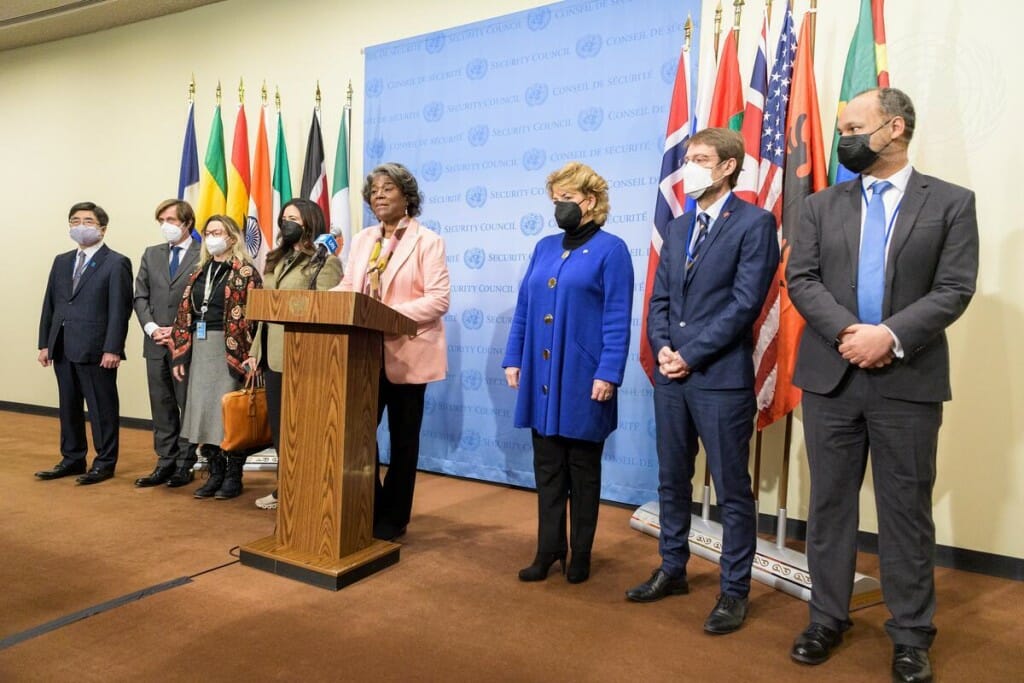 Linda Thomas-Greenfield (at podium), United States Ambassador to the United Nations, reads a statement on Jan. 20 ahead of Security Council consultations. With her are other ambassadors to the UN and diplomats. United Nations photo by Manuel Elías

Ambassador Linda Thomas-Greenfield, a top diplomat on the world stage, will take to the Camp Randall stage this May to address University of Wisconsin–Madison graduates.

Thomas-Greenfield, the United States Ambassador to the United Nations, will be the keynote speaker for spring commencement at UW–Madison on May 14. She will be returning to the place she credits with preparing her for success and for sparking her interest in U.S. policy towards sub-Saharan Africa, a focus of her diplomatic career. 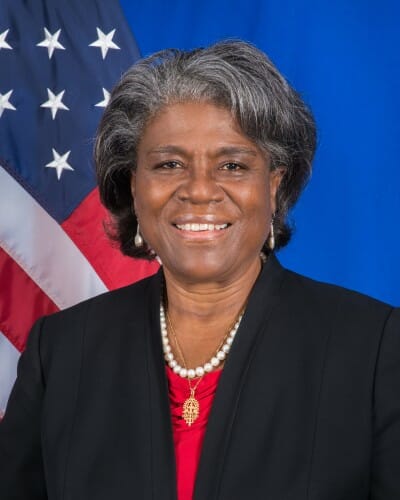 “I know that what I’ve achieved in my life is the result of the extraordinary education I received at this university and the connections I made here,” Ambassador Thomas-Greenfield said in 2018, upon receiving an honorary doctorate from UW–Madison. “All the major milestones in my life would start here on this campus.”

Ambassador Thomas-Greenfield earned a master’s degree in 1975 from UW–Madison, where she also did work toward a doctorate. She has maintained close ties to her alma mater and has mentored and inspired many UW–Madison students over the years.

As Representative of the United States to the United Nations, Thomas-Greenfield represents the United States on the U.N. Security Council and during meetings of the General Assembly. She was nominated for the Cabinet-level position by President Joseph R. Biden Jr. shortly after his election in November 2020. The U.S. Senate confirmed her nomination on Feb. 23, 2021.

“Ambassador Thomas-Greenfield’s remarkable journey reminds us that through adaptation, determination, and community, our greatest challenges may be converted into our greatest opportunities,” says Pranav Srivastava, senior class president. “As humanitarian crises of apartheid, genocide, and climate change persist around the world, we are excited to learn from Ambassador Thomas-Greenfield’s international approach to these issues and how we can apply her life experience as a model for our individual fights for human rights universally. Ambassador Thomas-Greenfield is a remarkable representation of Wisconsin’s global excellence, and we are beyond grateful to have her impart her wisdom on the Class of 2022.”

Ambassador Thomas-Greenfield has said that, at age 13, she realized the immense size of the world when the Peace Corps opened a training center in her small Louisiana hometown to prepare volunteers bound for Africa.

She was the first in her family to earn a high school diploma, graduating in 1970 from a segregated school. After earning a bachelor’s degree at Louisiana State University, she traveled to Madison to begin graduate studies. It was the first time she had flown on an airplane and the first time she’d been north of the Mason-Dixon line.

At UW–Madison, she was a scholar of Africa in the Department of Political Science and undertook a year-long fellowship to conduct political science research in Liberia. The experience solidified her desire to be a diplomat and launched her on an esteemed 35-year career in the United States Foreign Service.

She has praised the late M. Crawford Young, a professor of political science at UW–Madison and one of the foremost scholars in the world on African politics, as a crucial mentor and inspiration. 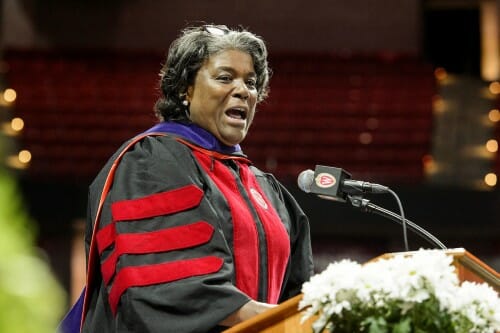 Linda Thomas-Greenfield speaks to the crowd after receiving a honorary degree during UW–Madison’s spring commencement ceremony at the Kohl Center on May 11, 2018. Photo: Bryce Richter

Ambassador Thomas-Greenfield’s career includes serving from 2013 to 2017 as the Assistant Secretary of State for African Affairs, where she led a bureau focused on the development and management of U.S. policy toward sub-Saharan Africa. Her Foreign Service career included an ambassadorship to Liberia (2008-2012), Director General of the Foreign Service, and postings in Switzerland (at the United States Mission to the United Nations, Geneva), Pakistan, Kenya, The Gambia, Nigeria, and Jamaica. She has been much lauded for her humanitarian work — when the Ebola outbreak erupted, Ambassador Thomas-Greenfield led an international response that effectively slowed and stopped the pandemic.

She has also accepted numerous invitations to address UW–Madison students, faculty, and staff. Ambassador Thomas-Greenfield spoke at the African Studies Program’s 50th anniversary celebration in 2012. Championing future generations of leaders, she has met with King-Morgridge Scholars and PEOPLE participants. Notably in 2018, Ambassador Thomas-Greenfield addressed the university community when accepting an honorary degree.