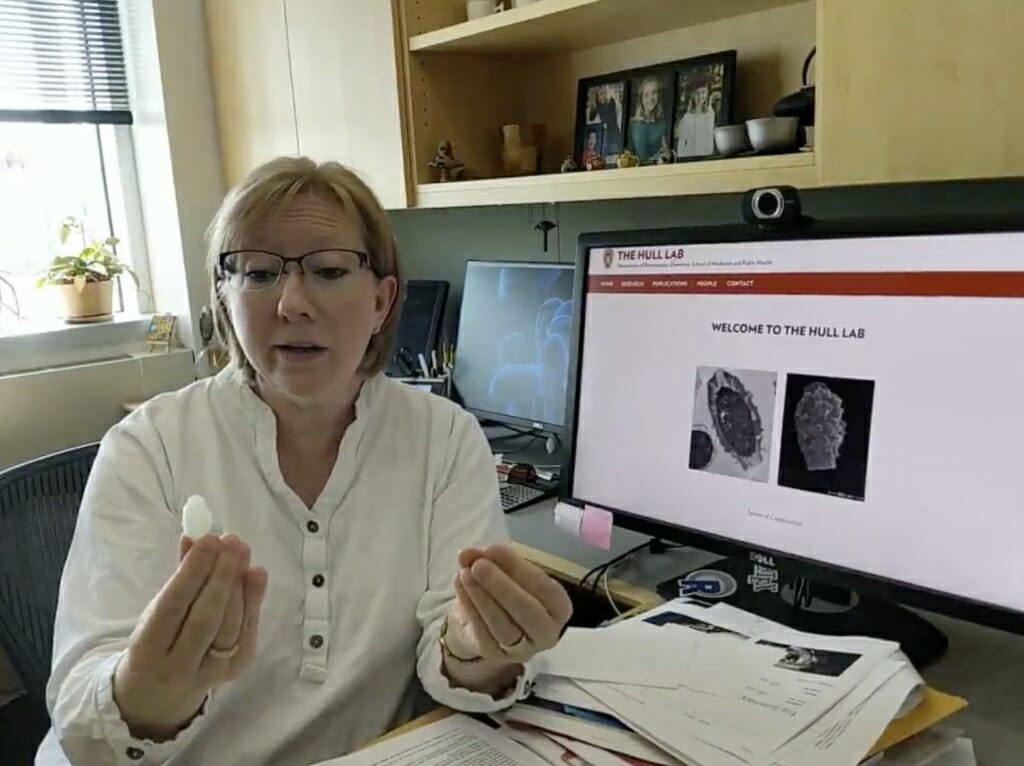 Christina Hull, professor of biomolecular chemistry at University of Wisconsin–Madison, holds a model of Cryptococcus, a deadly fungus that she has been investigating for more than a decade. Photo courtesy of Christina Hull.

A report today (June 27) in PLOS Pathogens shows how inhaled fungal spores exit the lung and trigger a fatal infection in mice.

The study solves a mystery of mycology: Why are spores of a certain fungal strain deadly while the yeast form of that same fungus is harmless?

Study leader Christina Hull, professor of biomolecular chemistry and medical microbiology and immunology at the University of Wisconsin–Madison, focuses on Cryptococcus, the most deadly inhaled fungus. The short answer, she says, is that lung macrophages abandon their posts as bodyguards and begin smuggling spores into the bloodstream. 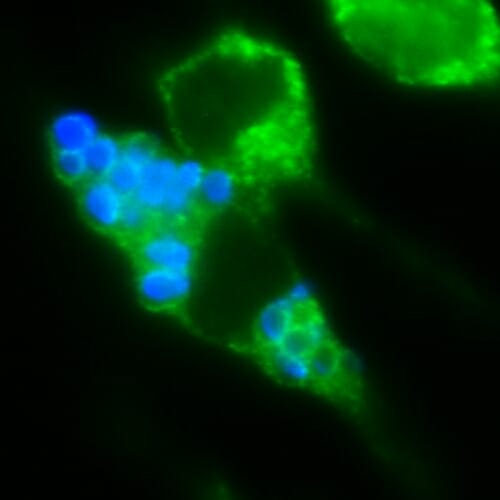 Toxic transports: Two immune cells are stained green. The cell on the bottom is a macrophage holding (and protecting!) the fungal pathogen Cryptococcus (stained blue). In a true “Trojan horse” maneuver, these immune cells help Cryptococcus spores escape from the lung and cause fatal brain disease in mice. Hull lab, University of Wisconsin–Madison

Normally, macrophages chew up pathogens and spit out their inert fragments. But in Cryptococcus infections, the immune cells serve as Trojan horses, concealing a deadly cargo.

The study revealed that macrophages in mouse lungs were packed with live Cryptococcus spores. “These immune cells are acting as a vehicle to invade the rest of the body,” says first author Naomi Walsh, “with the spores hidden inside, protected from other types of immune attack.”

This particular fungus can take the form of spores, which are produced during sexual reproduction. Spores are durable particles that can survive for years before sprouting into yeast to complete the life cycle.

Fungal spores are also ubiquitous in the environment, so humans and other mammals commonly inhale them, highlighting the need for protection by macrophages and other immune cells in the lungs.

Fungi have great genetic diversity. In some strains, both yeast and fungal spores cause disease. In others, both are harmless. But why, Hull wondered, would an inhaled yeast of a particular strain cause no disease when the same strain was deadly as an inhaled spore?

In the PLOS Pathogens report, Hull’s group probed this  inconsistency.

The new study grows from more than a decade’s worth of research by Hull’s lab, searching for cracks in the armor of Cryptococcus. The launchpad was the 2009 invention by former graduate student Michael Botts of a practical method for concentrating large numbers of spores using a centrifuge. That work enabled mouse studies that needed significant quantities of pure spores. 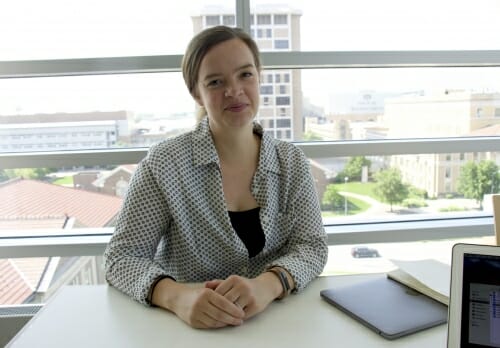 As a graduate student and post-doctoral fellow in Hull’s lab, Naomi Walsh investigated Cryptococcus, helping to pin down its peculiar strategy for escaping the lung to cause systemic disease. Photo by David Tenenbaum

In the mice, the spores produced by “non-virulent” yeast strains caused 100 percent mortality, with infections of the brain, kidney, lung, liver, and spleen, Walsh says. “Mice exposed to the same dose of yeast had fungus in the lung only … and they looked healthy the whole time.”

The Trojan horse did more than smuggle spores from the lung: the macrophages provided shelter for the spores while they germinated into yeast, showing how the spores started a fatal infection.

This failure of immune defenses matters, Hull says. Fungal infections are hard to treat, because fungi are much closer to mammals on the evolutionary tree than bacteria. Therefore, compounds that harm fungi tend to harm humans.

Rule breaking is the rule in the new results, Hull says. “First, we found that spores caused fatal disease, even though they were genetically identical to yeast that could not cause disease at all. That’s unusual. Then we discovered that the disease only occurred if spores were engulfed by macrophages that would normally kill them. And finally, once inside the ‘protection’ of the macrophages, the spores germinated, hitched a ride out of the lung, and made the mice sick. Immune cells that were supposed to protect the mouse from the fungal pathogen actually helped the fungus cause disease.”

The Trojan horse strategy has previously been seen in anthrax, a bacterial disease, where immune cells move spores in a similar fashion, but this is the first time it has been identified for an inhaled fungal pathogen.

By shedding light on this conversion of a host’s defense into a fungal offense, Hull’s findings could lead to ways to shield people who are susceptible to the fungus due to immune deficiency.  “By understanding how spores move from the lungs to other tissues,” Walsh says, “we can develop new strategies for preventing spore-mediated fungal diseases and learn how to treat patients more effectively.”

Another crack in the armor may be the germination process that spores use for conversion to yeast, Walsh adds. “Humans do not have a process of germination, and so that process becomes an attractive target for prophylactic drugs that should not be toxic to mammals.”

Already, Hull reports, automated screens for existing drugs or other compounds that can deter spore germination are producing promising results.