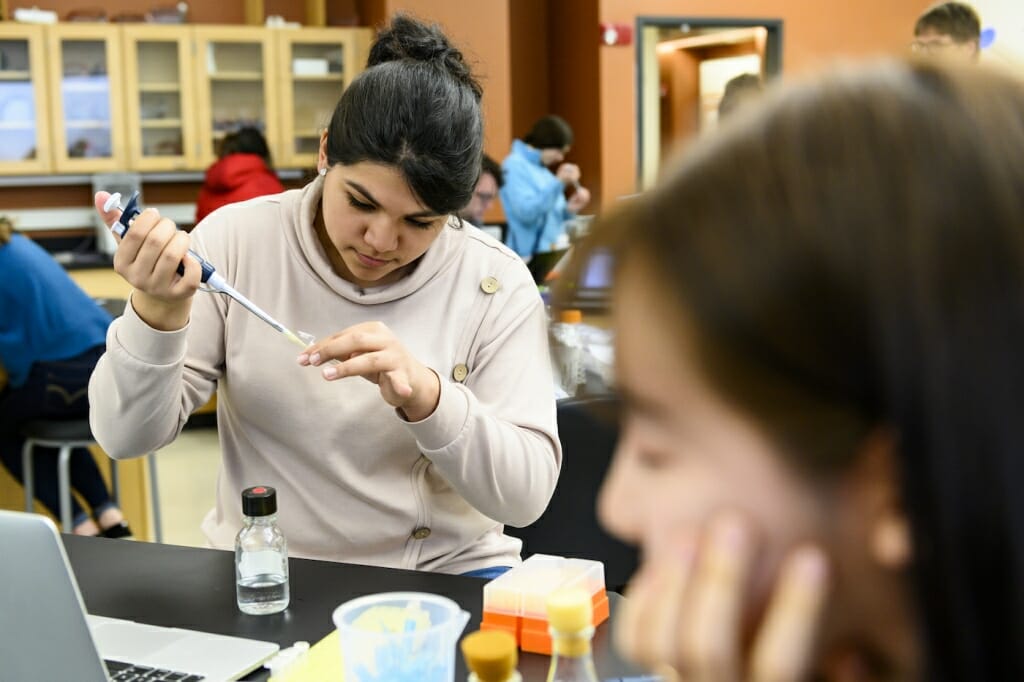 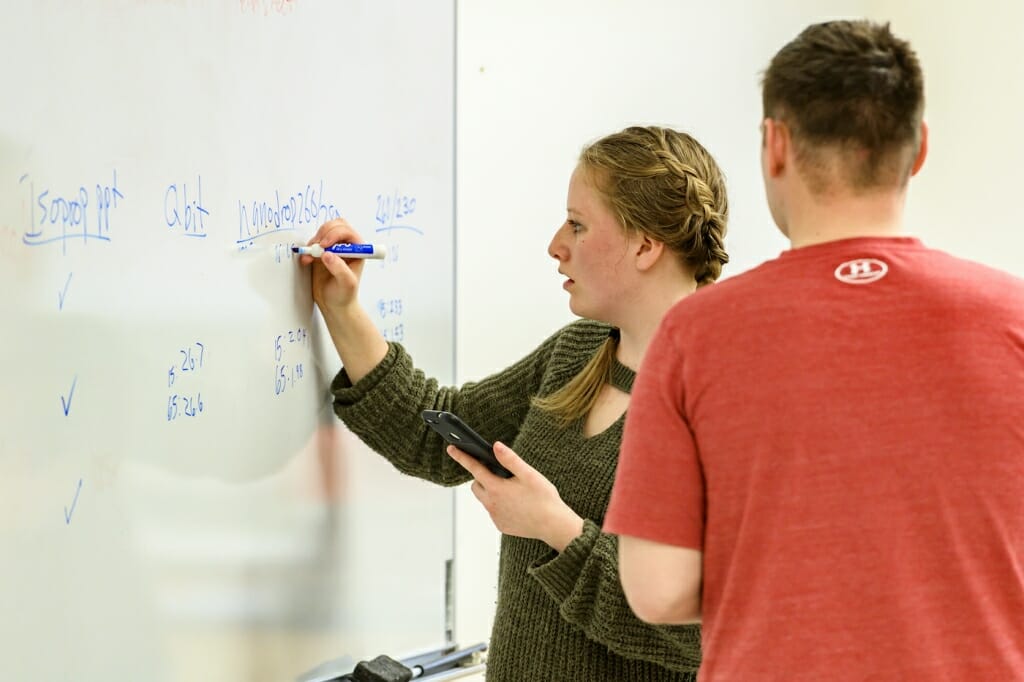 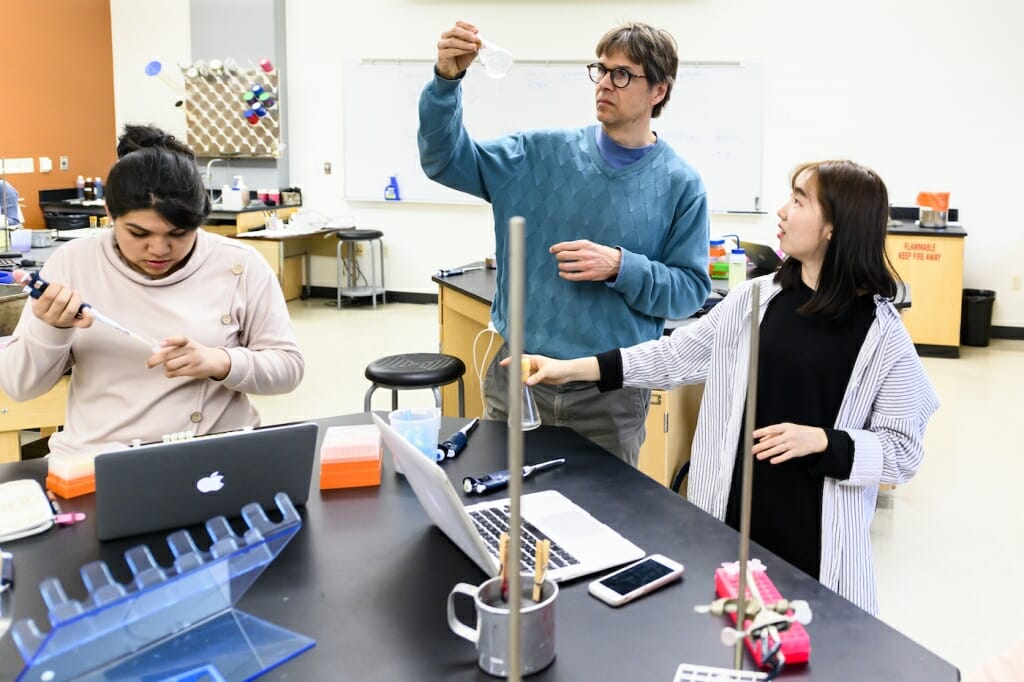 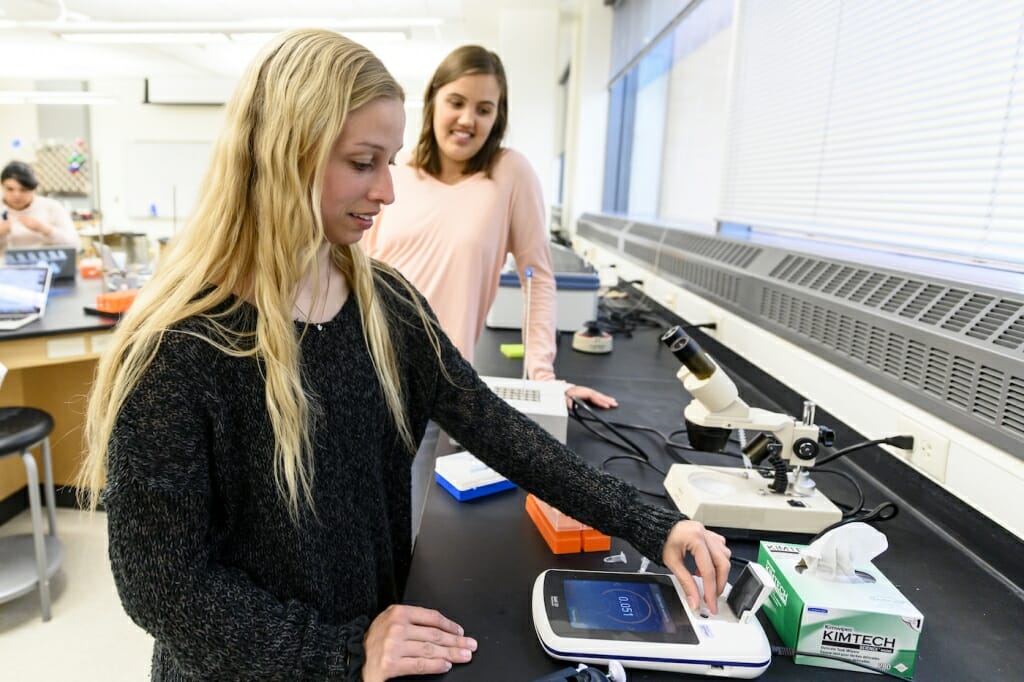 Students Ellie Valentine (left) and Kayla Bonack (right) look at results from a device that analyzed a specimen. Photo by: Bryce Richter 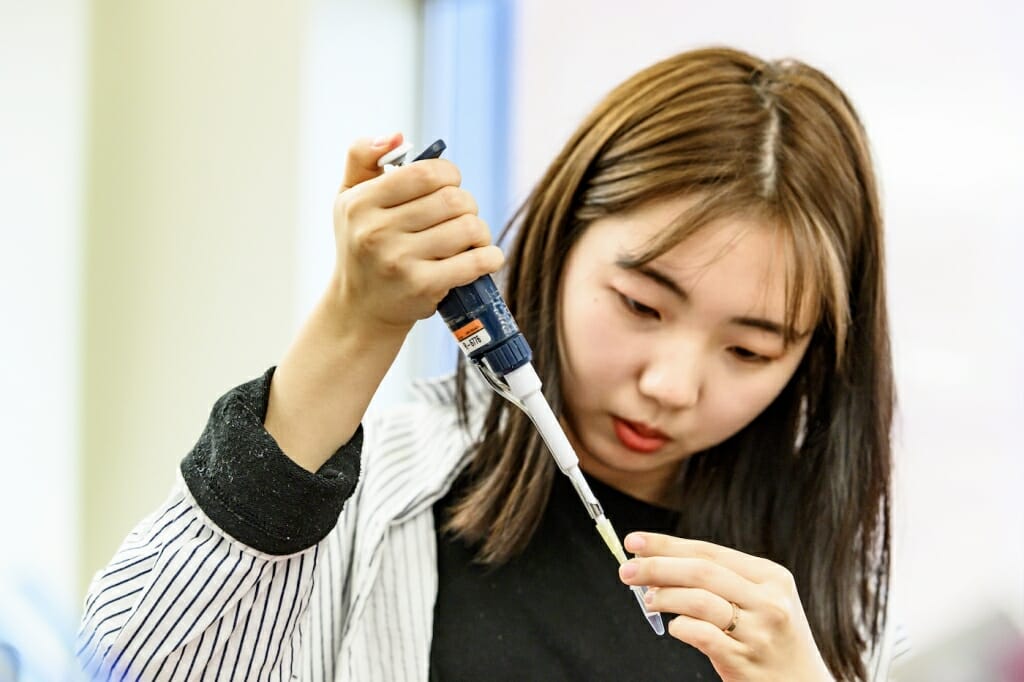 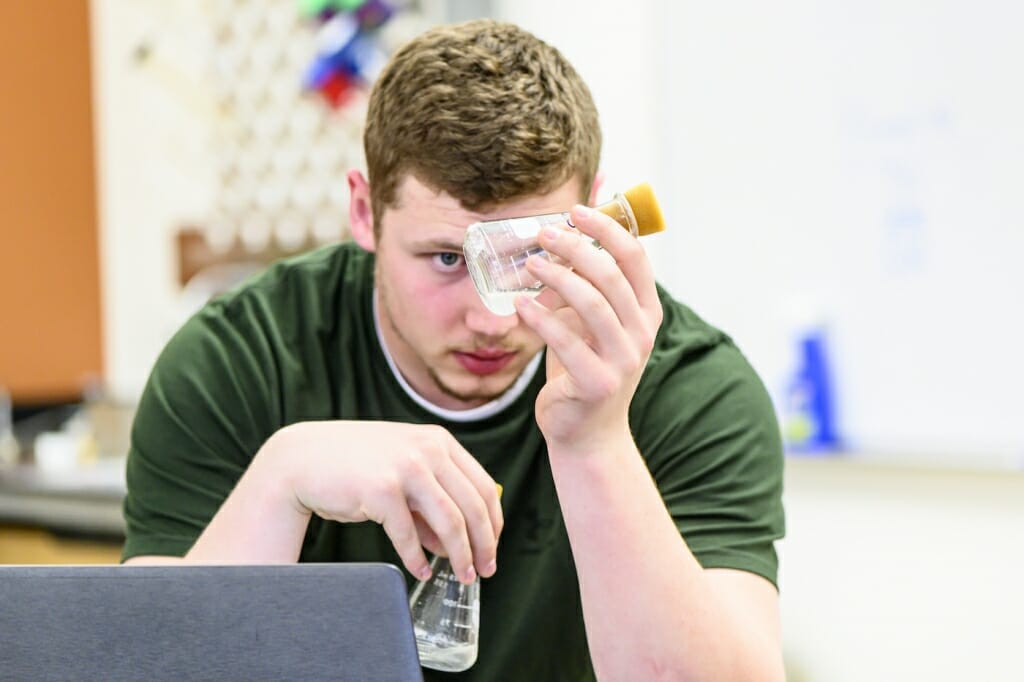 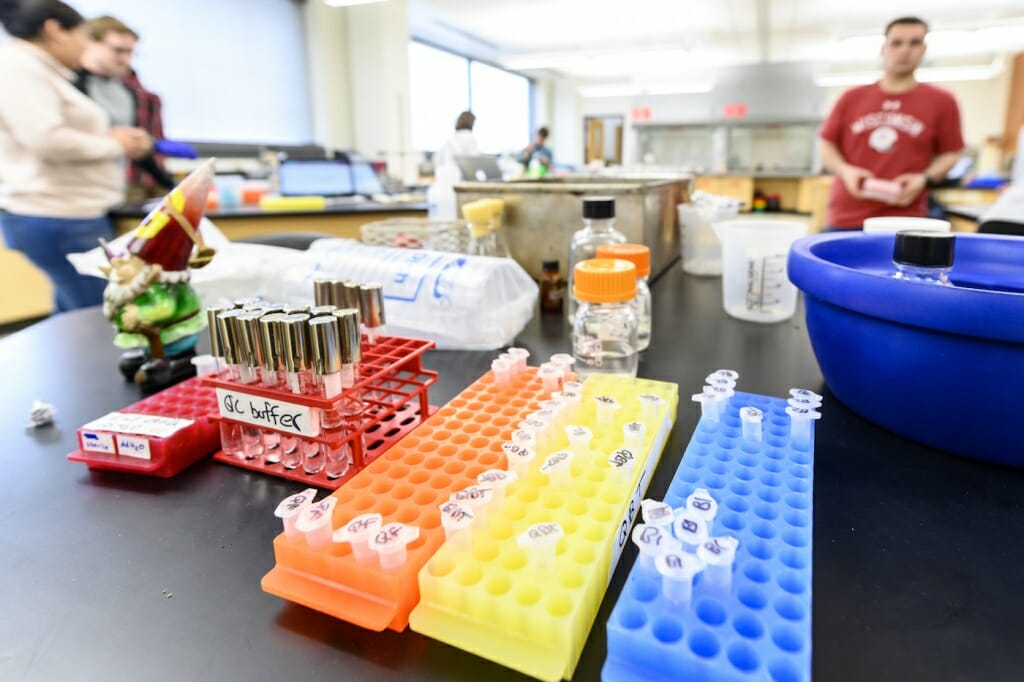 Unique microbes that had been collected by a UW–Madison researcher from deep sea hydrothermal vents are labeled. Photo by: Bryce Richter

As one of April’s last snowstorms swirls outside, obscuring the view of west campus, the students’ thoughts inside turn to warmer climes.

Much warmer. Some 700 degrees Fahrenheit, give or take.

That’s the temperature at deep sea ocean vents, where their bacterial subjects were isolated, more than a mile beneath the ocean’s surface. With hydrogen sulfide and methane streaming past at scorching temperatures, and pressures 200 times those we experience on land, the students’ quarries inhabit one of the most extreme habitats on Earth: hydrothermal vents — cracks in the Earth’s crust that spew superheated water and chemicals into the ocean.

But now these microbes have been scooped up from the deep and brought to the second floor of the Microbial Sciences Building.

This capstone research project cements skills and knowledge from a major that sends students off in diverse directions — from jobs in food science or biotechnology to advanced training in medical or pharmacy school.

And, with a bit of luck, the students might just identify a brand-new species of bacteria, adding to science’s catalog of life on Earth.

“This course is very hands on. It’s mostly independent, which I think is a testament to the strength of the program at UW–Madison, that the faculty prepares us enough and trusts us enough to do something like this,” says senior Jake Kay, as his team isolates DNA from bacterial strains. “We’re doing something that could produce legitimate findings, legitimate research. I just think it’s an opportunity that might not be afforded at other schools.”

The students are working with samples collected by Karthik Anantharaman, a UW–Madison professor of bacteriology, on a research cruise to the Pacific Ocean near Mexico last December.

“We’re interested in studying the benefits that viruses bring to their ecosystems,” says Anantharaman. Viruses serve as predators of the bacteria that form the foundation of hydrothermal vent environments. But to study the viruses he collected from the vents, Anantharaman needs bacterial hosts for his viruses to grow on.

“That’s where some form of citizen science comes in,” Anantharaman says.

“I was in a seminar and Karthik just happened to sit down next to me and we got talking. He said, ‘I’m going down for deep-sea samples this December. I’m trying to get my students interested in trying to isolate organisms from it, but they don’t want to,’” remembers Timothy Paustian, who teaches the capstone course along with instructor Melissa Christopherson. “I said, ‘I’ve got a deal for you. I’ve got 40 students, and we’d be happy to do it.’”

Paustian’s enthusiasm provided a challenge for his students. Like most environments, the oceans teem with uncountable numbers of bacteria. Yet the vast majority of species — up to 99 percent — stubbornly refuse to grow under standard laboratory conditions. Coaxing Anantharaman’s exotic deep-sea microbes to grow would require patience and creativity.

“What we did was really limit the nutrients so that the other 99 percent could grow,” says Anna Scheunemann, a native of Grantsburg, Wis. “And then slowly you can move it on to higher nutrient concentrations, because it adapts to this new kind of metabolism growing in the lab.”

Of the 91 strains of bacteria isolated by students this way, two or three appear to have never been cultured in the lab before based on partial sequences of their DNA. Paustian and the students selected 25 strains to investigate in depth in hopes of finally sequencing 12 of them. After the students finish extracting microbes’ DNA in the lab, they’ll send it to the Biotechnology Center, which will sequence the entire genome and send the data back to the students.

Using online tools, the students will analyze their samples’ genomes and gain insight into how the bacteria survive under the harsh conditions on the ocean floor.

“You put in your genome that you get, and then you’ll go through steps and the program will say that this is the metabolism that your organism has and this is what we think based on these genes it can do, what it can grow on, what it produces,” says Scheunemann.

This kind of analysis, known as bioinformatics, has found its way into every corner of biological research with the explosion in genomic data provided by modern DNA sequencing tools.

“Bioinformatics is the next frontier. That’s why we’re trying to incorporate data science into the biology curriculum,” says Anantharaman.

For Anna Kaldjian, who is set to enroll in medical school in her hometown of Iowa City after graduating in May, the microbiology major, and the capstone course in particular, set themselves apart by training her and her peers to think critically about the world.

“Anything that’s the process of science, anything that’s real research, I think is valuable for the way you think about problems,” says Kaldjian.

What the students can’t know for sure as the April snow flies is whether the microbes they’ve carefully tended during the semester are really novel or rather bugs that were discovered earlier by other researchers in other labs. Later that month, the full genome comes in.

The students have discovered two new species from the depths.