A hidden world of communication, chemical warfare, beneath the soil

The soil supporting a field of crops teems with life. Untold numbers of bacteria and fungi strive for space and food. Most are harmless. Many are vital to creating healthy soil. But farmers worry about a handful of species that cause devastating crop diseases, and they often turn to chemical pesticides to keep those pathogens in check.

New research shows how some of these harmful microbes have to contend not just with a farmer’s chemical attacks, but also with their microscopic neighbors — and themselves turn to chemical warfare to ward off threats. 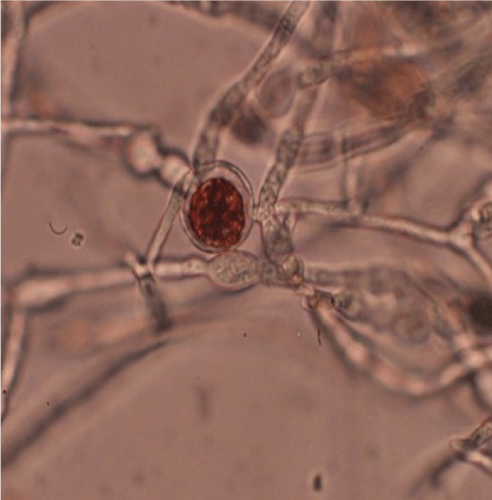 The red pigment and antimicrobial compound bikaverin is shown accumulating in a chlamydospore in the fungus Fusarium fujikuroi. Nancy Keller

University of Wisconsin–Madison Professor of Medical Microbiology and Immunology Nancy Keller has been exploring the hidden world of soil pathogens for years, listening in on the chemical signals they send back and forth to one another. Her team’s latest research decodes one of those signals. When the bacterial wilt species Ralstonia solanacearum tries to infect the fungal pathogen Fusarium fujikuroi, the fungus retaliates with a host of antibacterial compounds to keep its invader at bay.

This research is a small part of efforts to shine a light on the mysterious microbial communities beneath our feet. Like they’re doing with the animal microbiome, researchers are trying to uncover which microbes reside in the soil, what messages they’re sending out, and what those signals mean. A greater understanding of these rich communities will likely help scientists respond to persistent threats crops face from these microbes.

The work is published May 22 in the journal mBio. Keller collaborated with researchers at Cornell University, the University of Illinois at Chicago, and Westfälische Wilhelms-Universität in Germany. 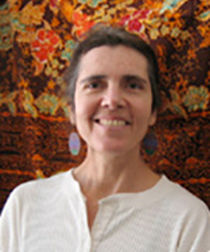 “Ralstonia is a lethal wilt pathogen worldwide and attacks over 200 plants,” says Keller, who also has an appointment with the Department of Bacteriology and is a trainer in Plant Pathology. Fusarium species are a major cause of fungal wilt diseases in crops. Both microbes can colonize the same host, such as tomato plants.

Keller first started studying how bacteria and fungi interact after some chance encounters. As spores from fungus in her lab drifted onto petri dishes growing bacteria in the neighboring lab of Caitilyn Allen, a professor of plant pathology, several students noticed the two microbes seeming to compete and interact.

Years later, closer inspection showed that Ralstonia could induce nearby fungi to produce distinctive, hardy structures called chlamydospores, which help the fungus survive stress. The bacteria then invade those spores, likely as a way to survive the winter. The Keller lab published those findings in 2016.

What they also noticed was that the chlamydospores turned a unique shade of rusty red in the fungal genus Fusarium. In the current study, they identified that red compound as bikaverin, a chemical that helps the fungus resist infection by the bacteria.

Keller’s team showed that Ralstonia secretes a compound that causes Fusarium species to develop chlamydospores. The fungus then produces a suite of antimicrobial agents, including the red bikaverin, to protect those spores from invasion. When the scientists removed the fungus’ ability to produce bikaverin, Ralstonia more successfully invaded the fungus.

Fusarium isn’t the only fungus that can make bikaverin. An unrelated species, also a damaging plant pathogen, known as Botrytis cinerea, acquired the bikaverin-producing machinery from Fusarium in an ancient genetic transfer. When exposed to the same bacterial compound that produces chlamydospores in Fusarium, Botrytis also produced the structures. And Botrytis started making bikaverin as well, presumably for its antimicrobial effects.

What surprised the researchers was how Ralstonia could induce bikaverin in the two fungal species regardless of the environment. Normally, Fusarium and Botrytis produce the red pigment under very different conditions, primarily based on what nutrients are available. But the threat of invasion posed by Ralstonia overrode those differences, spurring both fungi to defend themselves with bikaverin.

These call-and-response offensive and defensive maneuvers are certainly just a small part of the chemical signals passed between microbes hidden from view, says Keller. A whole orchestra of bacteria and fungi unleash a symphony of these messages all the time. It’s scientists’ jobs to decipher the meaning.

“How these microbes interact and talk with each other is still in its infancy,” Keller says. “We really don’t know how they talk to each other. And that’s where we want to go in our lab.”