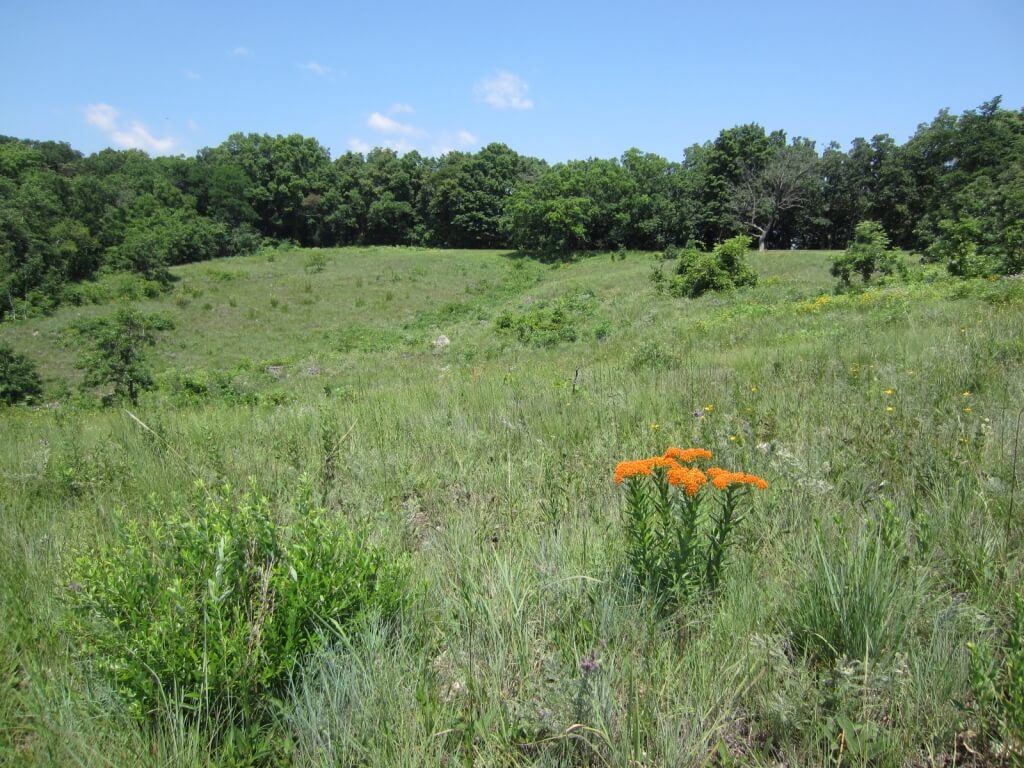 It was shortly after the end of World War II when John Curtis, inspired by his service as a civilian researcher aiding war efforts in Haiti, dedicated his energies to studying the ecology of Wisconsin’s plants. The late botany professor at the University of Wisconsin–Madison was particularly enamored of prairies.

Between 1947 and 1956, Curtis and his colleagues and students conducted their prairie relic study, surveying more than 200 undisturbed prairie remnants in Wisconsin — walking each in its entirety while keeping lists of every plant species they found. 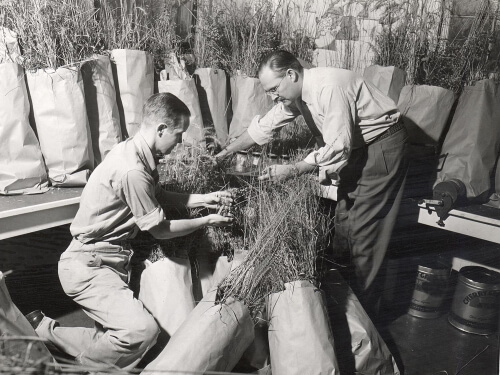 In 1987, then-UW-Madison graduate student Mark Leach used Curtis’ original notes and maps to resurvey some of these prairies.

Today (Feb. 19, 2016) in the journal Science Advances, another UW–Madison graduate student, Amy Alstad, and a team of researchers have published a third survey based on Curtis’ legacy work. They found that human influence has accelerated the rate of species change in these prairies, and that fire and prairie size affect the overall plant species diversity found within them. 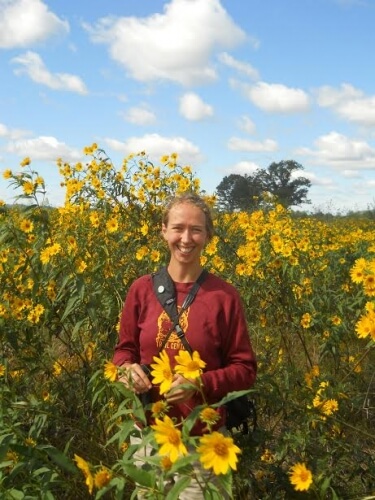 Amy Alstad stands in a bunch of Sawtooth Sunflowers that she describes as glorious. Photo: Jesse Miller

“We know Curtis selected those sites in the 1940s and 50s because they represented the best remaining prairies in Wisconsin at the time,” says Alstad, the study’s lead author. “What became apparent was that things are very, very different now than they were.”

Not only do the findings provide critical information to land managers and state and private agencies committed to preserving Wisconsin’s landscape, but the results are also likely to describe what is happening in other natural places, say Alstad and her advisor, co-author Ellen Damschen, associate professor of zoology.

“It is very likely this trend is common to a lot of ecosystems because we live in an era of novel human impacts,” says Alstad. “While ecologists used to think about soils or rainfall, all of a sudden there is a whole new suite of drivers — most of them related to human activities — that are simultaneously acting on natural systems.”

For example, a changing climate and loss of habitat have affected prairie ecosystems, and while fire used to be commonplace on the prairie, people have fundamentally changed the nature of the landscape by suppressing this natural disturbance.

“What became apparent was that things are very, very different now than they were.”

For the study, Alstad drove throughout southwestern Wisconsin three times in the summer of 2012, revisiting the original Curtis prairies. She used Curtis’ original field notes in combination with modern satellite technology to find those that still existed and could be resurveyed.

“I really was going back to the dusty old, faded yellow sheets from John Curtis, trying to decipher his cursive handwriting and hand-drawn maps,” Alstad says. And just like Curtis, she walked through the prairies, checking off all the plant species she encountered. 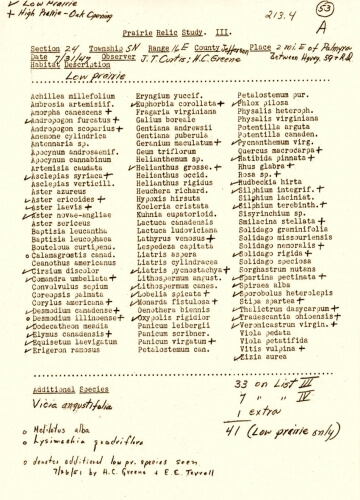 She compared her findings to those from the previous surveys to uncover what had changed over time. In the years between the second survey in the 1980s — which examined 50 remaining prairies — and the third in 2012, one prairie could not be found, one had become a homeowner’s front yard and another had been paved over.

“It wasn’t rare for me to drive up to a site in 2012, 60 years later, and have this moment where I’m looking at Curtis’ map but saying: ‘This is a forest; it’s totally filled in,” Alstad says. “That observation inspired me to really dig in to see how things are changing. And I learned there’s been a big uptick in the pace of change.”

The team examined the relationship between the characteristics of each prairie remnant — soil moisture, total prairie area, and the number of fires the prairie remnant experienced — and what species had disappeared (extinction) or appeared for the first time (colonization).

They learned that between the second and third surveys, the disappearance of species tripled while the appearance of new species not indigenous to prairies had doubled when compared to the years between the first and second survey.

Some sites, the research team found, had fewer than 18 percent of the species documented in the 1950s survey, and some were now made up of more than 60 percent non-native species.

“More than one species is being lost in the average year,” says Alstad. “The species that we’re losing most frequently are specialist prairie plants, like rattlesnake master.” 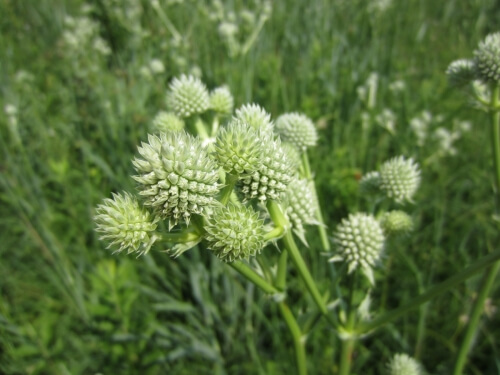 The species that are showing up instead, Alstad and Damschen say, are more generalist plants, like those you might find in a roadside ditch or in a thick, brambled woods.

“For the most part, it’s fast-growing weedy trees,” she says. “It’s box elder, it’s buckthorn, it’s honeysuckle, and probably a big part of their success is the absence of fire.”

In the prairies she studied, Alstad found those that have been burned with controlled, prescribed fires were most similar to the prairies Curtis described six decades ago. Twelve of the remnants she studied had burned anywhere from one to 30 times in the years since.

“There’s a ton of interest in restoring native habitat in this part of the world,” says Damschen. “Thinking about fire as helpful rather than harmful, which has been a cultural perception, is a shift we have begun to see, and hopefully it becomes more commonplace.”

Alstad attributes this skepticism of the benefits of fire to the “Smokey the Bear effect,” since many people internalize messages they received as children about the detriments of fire.

When it comes to burning prairies, Alstad and Damschen say successful land management must recognize the needs of all species because conflicts can occur. 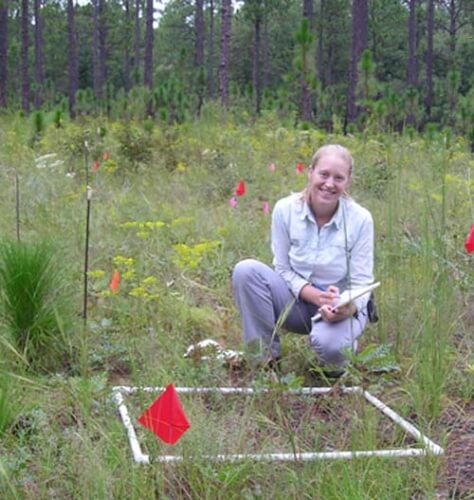 Ellen Damschen says the loss of species in an ecosystem has implications for human well-being and the future of natural communities.

And, while good for maintaining the historical composition of prairies, using fire is complicated by other logistical constraints, Damschen says, noting that the Tallgrass Prairie and Oak Savanna Fire Science Consortium, based at UW–Madison, ties together existing fire-based research and communicates it to managers.

Predicting future ecosystems is also inherently challenging, but Damschen says, “In general, we know that the more species you have in an ecosystem, the more resilient the ecosystem is to other changes in the future. If you lose species, the function of those species is lost and that has implications for human well-being and the future of southern Wisconsin’s natural communities.”

Many species in a prairie are involved in retaining water to protect against drought, absorbing atmospheric carbon dioxide to buffer against greenhouse gas effects, and more. Many individual plants have been alive in the prairie for a century or longer, Damschen says, not unlike the iconic redwoods in the Pacific Northwest.

“Our results are in alignment with the idea of an ‘extinction debt,’” she says. “Some species are very long-lived and it might take them a long time to respond to current impacts, but it’s a debt that will eventually come due.”

In the years between the second survey and the third, one prairie could not be found, one had become a front yard and another had been paved over.

However, Damschen and Alstad say there is hope. Never has Damschen lived in a place with more passion for a single habitat, and Alstad says there are many opportunities for Wisconsin residents to get involved in efforts to restore prairie.

Their research shows that work by the Wisconsin Department of Natural Resources and others to protect and restore remnant prairies and their surroundings helps retain species diversity. Citizen efforts to plant prairie species on their property or volunteer with local management efforts to restore prairie will undoubtedly aid in this effort.

“Even if it’s not in a professional capacity, we can be land stewards for prairies,” Alstad says. Because if we do nothing, in another 60 years, “there will be no prairie in southern Wisconsin.”

For more information on how to get involved and support prairies, the researchers recommend the following resources: Tallgrass Prairie and Oak Savanna Fire Science Consortium, the UW Arboretum (home to the world’s oldest restored prairie, named for John Curtis), and The Prairie Enthusiasts.