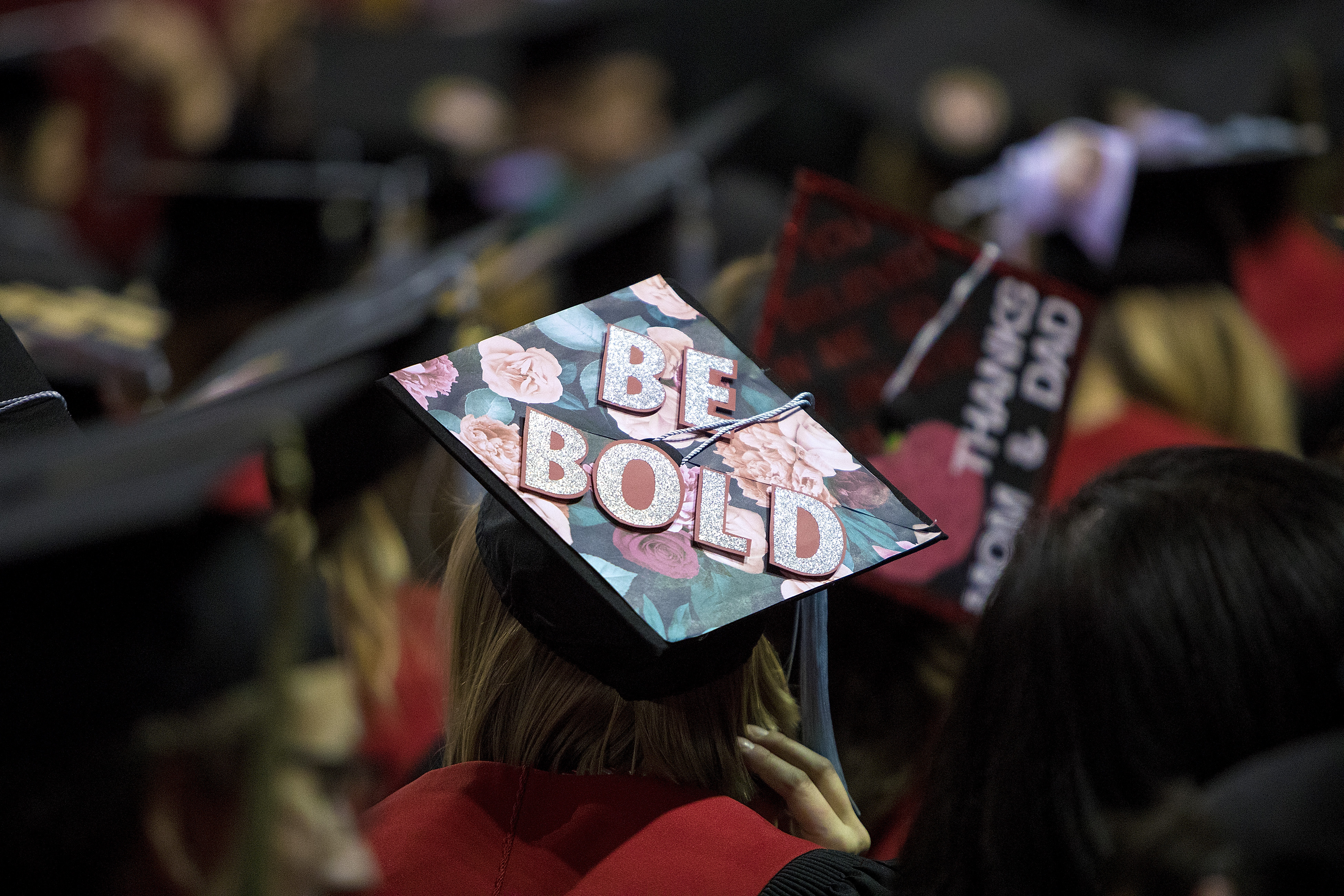 Graduates express their pride and creativity on the mortarboards. Photo: Hyunsoo Léo Kim

One takeaway from UW–Madison’s winter commencement Sunday: When the leader of a university asks a small favor, people tend to comply.

UW–Madison Chancellor Rebecca Blank briefly paused the proceedings and asked graduates to join her in taking a selfie with those around them and tweeting it to #uwgrad.

Hundreds pulled out their phones, momentarily turning the floor of the Kohl Center into a giant photo booth.

About 1,150 graduates took part in Sunday’s ceremony, out of just over 2,000 earning degrees. The total crowd size, including graduates, was 8,812.

Blank told graduates that the number one predictor of their impact will not be genius or luck, but how hard they try and how hard they work.

“When you find that place where what you’re good at and what you’re passionate about come together, that is where your life’s work awaits you,” she said. “Choose opportunities that put you there.”

Sunday’s keynote speakers were Edward Kitsis and Adam Horowitz, UW–Madison alums and a top Hollywood writing and producing team. They also may want to consider hitting the comedy circuit together. They drew laughs as they recounted their undergraduate friendship and their modest beginnings as film students. 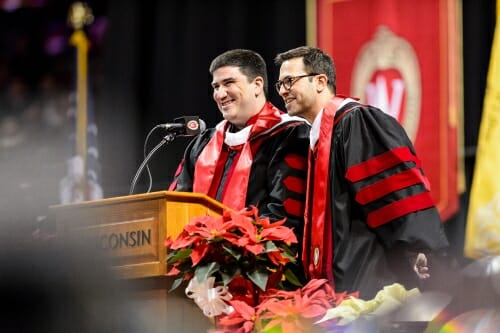 “Are they still around?” Kitsis asked.

Horowitz joked that the next stop after cable access was obvious: Hollywood, California.

There were ups and downs, the two said, but they went on to become the creative forces behind television shows such as “Lost” and “Once Upon A Time.” Sunday, they drew on the storytelling process to give advice, telling graduates not to be “hollow bunnies.”

The phrase, they said, refers to cheap Easter chocolates that look tasty but crumble when you bite into them. Among Hollywood writers, it means a character that seems solid but isn’t. It applies to so much beyond writing, they said.

“Experience life. Be well-rounded. Career and money aren’t everything,” Kitsis said. “Characters in movies and television shouldn’t be one-dimensional, and neither should you. Don’t be a hollow bunny.”

Student speaker Jada Kline wowed the crowd, detailing how her ancestors were sharecroppers who overcame major barriers to succeed. She told graduates not to let complacency hold them back. 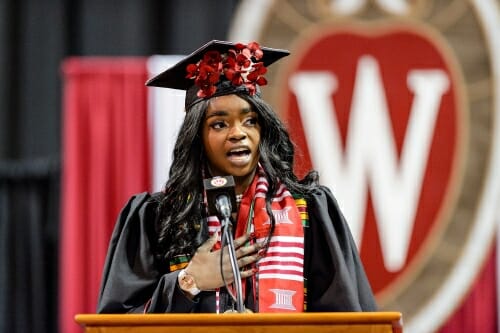 “What legacy will you leave for the next generation Badgers, and where will you take the torch of the Wisconsin Idea?” asked student speaker Jada Kline. Photo: Jeff Miller

“What legacy will you leave for the next generation Badgers, and where will you take the torch of the Wisconsin Idea?” asked Kline, who earned a bachelor’s degree Sunday in political science and biology.

The ceremony included a special moment with a long ago graduate. Luciano Barraza of San Antonio, Texas, came back 50 years later to walk across the stage and receive his doctoral degree in agricultural economics. He had completed the degree in 1967 but was unable to participate in graduation back then due to work and family obligations in his native Mexico and a lack of money.

Chancellor Blank recognized him in her remarks, and the crowd cheered wildly when he later walked across the stage. He held his diploma high above his head like a trophy.

Sunday was a victory lap for every graduate in the audience — and their friends and family members.

Embla Huang’s parents took a 16-hour nonstop flight from China to see their daughter earn her bachelor’s degree in interior architecture. Edna Caraballo-Gonzalez of Stamford, Connecticut, beamed as her son, Christian Gonzalez, earned a degree in political science and Spanish.

Graduates brought the bling, as is the tradition, decorating their caps with designs and messages — some funny, some serious.

Emily Nelis of Odanah, Wisconsin, estimated she spent 24 hours on the traditional Ojibwe floral beadwork adorning her cap, an homage to her Native American roots. A golden eagle feather dangled next to her tassel.