UW–Madison senior Jada Kline remembers watching her high school graduation ceremony with a tinge of disappointment. She’d auditioned to be one of the student speakers but missed the cut.

“That could have been me up there,” she thought to herself.

As with many things in Kline’s life, the experience motivated her. “I’m going to be the commencement speaker at whatever college I go to,” she pledged that day, “and it’s going to be so much sweeter.” 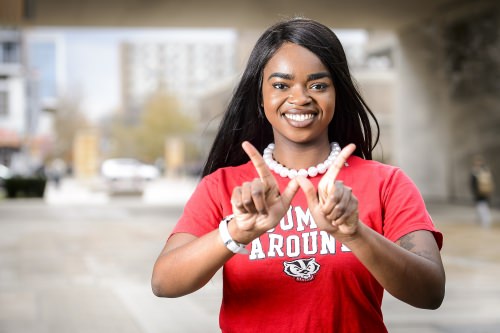 That sweet day has arrived. Kline has been chosen as the student speaker for the UW–Madison winter commencement ceremony on Dec. 17 at the Kohl Center. She will be graduating with a degree in political science and biology.

All graduating seniors were eligible to apply for the honor by submitting a speech and an audition video or audio tape. The senior class officers made the selection.

“We were blown away by Jada’s story,” says Ariela Rivkin, senior class president. “It was clear that she has been deeply moved by her time here at UW–Madison, and she is excited to share everything she learned with us. Her remarks are thoughtful and impactful and truly encompass the Wisconsin Idea.”

Kline, a graduate of Metea Valley High School in Aurora, Illinois, says the story of how she was passed over as a student speaker in high school is an important one to share. It underscores themes she’ll touch on at the Kohl Center: bouncing back from disappointments, never becoming complacent, trying harder the next time.

“I want to inspire students not to shrink from the task at hand,” she says.

Kline credits the Chancellor’s Scholarship Program with helping her feel immediately welcome at UW and with helping her begin to find her voice. The program seeks to attract, support and develop the abilities and potential of academically talented and outstanding individuals from underrepresented groups.

“It had such a big impact on me,” Kline says, “not only because it paid my tuition ­– which is amazing, of course – but also because it created this smaller family within the larger Badger community where I felt I could really be myself.”

Still, as a college freshman, she was “a little reserved,” she says. The turning point came her sophomore year when she began attending meetings of the Wisconsin Black Student Union.

“That really opened me up,” says Kline, who went on to serve on the group’s executive board. “I really enjoyed the activism and the serious discussions about race and diversity. I started to meet a lot of people and really came into my own.”

“I want to be able to look into the audience and make eye contact with that one person who maybe really needs to hear those words that day,”

Many other volunteer activities beckoned, and Kline embraced them, from the Boys and Girls Club of Dane County to AHANA (African, Hispanic, Asian, and Native American) Pre-Health Society, a student organization for those interested in the health professions. She especially has enjoyed her work with the Zeta Xi Core Chapter of Delta Sigma Theta Sorority, Inc., a public service sorority with a primary focus on serving the black community.

“It’s such an inspiring group of women,” she says. “So many members of the sorority have left a legacy of societal change over the decades.”

Academically, Kline focused her undergraduate research on the field of oncology, and she undertook multiple internships. Following her sophomore year, she spent the summer participating in genomics research at the Broad Institute of MIT and Harvard, a flagship center for the genetic and molecular analysis of common diseases.

Post-graduation, she will be working full-time for AbbVie, a biopharmaceutical company she interned with last summer. She plans to apply for medical school, with an eye toward starting in the summer of 2019.

While she has clear plans for her future, she knows that’s not necessarily the case with every graduate.

“I really want to impart to my fellow graduates that even if you don’t know your path yet, you should never forget all the work you’ve done here and the passion and fire and determination you’ve brought to it,” she says. “You’re a Badger, and you have so much to give to the world.”

She plans to memorize her address, she says, so that she can be fully present in the moment.

“I want to be able to look into the audience and make eye contact with that one person who maybe really needs to hear those words that day,” she says.