With ceremony and salutes, ROTC graduates begin their military service 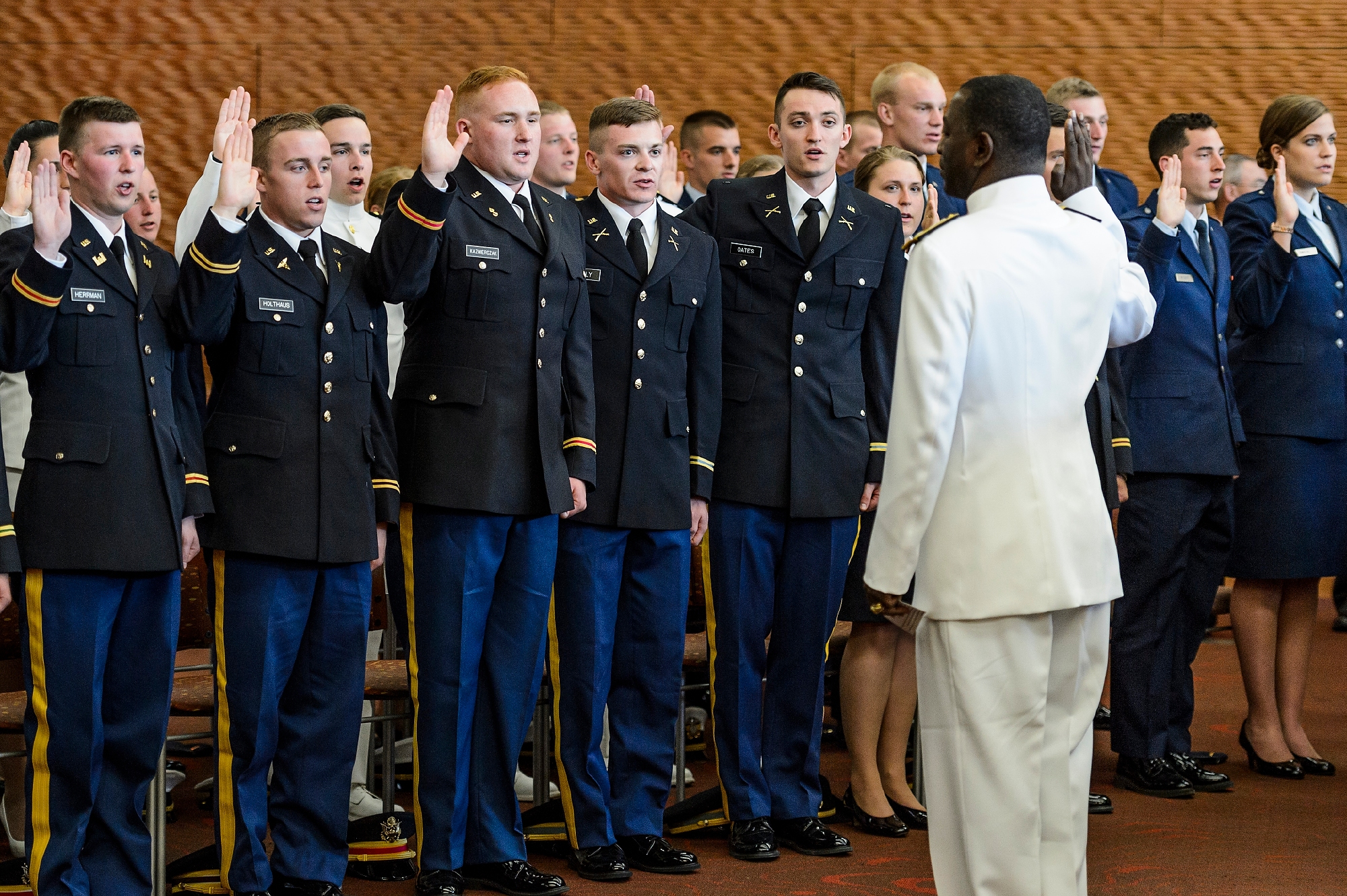 Members of UW–Madison’s Army, Navy and Air Force ROTC units take the oath of office, led by Rear Admiral Stephen C. Evans, at right, during an officer commissioning ceremony at Gordon Dining and Event Center on May 13. Photo: Jeff Miller

Rear Adm. Stephen C. Evans, the head of Naval Service Training Command, commissioned 35 members of the University of Wisconsin–Madison Reserve Officers Training Corps in a ceremony May 13 at Gordon Dining and Event Center.

The students were each personally recognized by their commanding officers, who along with Evans handed out commissioning certificates at the ceremony. The newly commissioned officers will serve around the globe in a variety of military jobs.

“This is a fantastic honor for us to have Rear Adm. Evans here to celebrate this joint commissioning,” said Navy Capt. Christopher Murdoch, professor of naval science and NROTC commanding officer.

“We have 35 future officers from all three services that have taken the oath today and it’s just a wonderful and special day. We are just very pleased that the admiral could join us to celebrate with these young men and women as they look to begin their military careers.”

Commissioned into the U. S. Marine Corps were: Cogan and Cole Kirchenwitz of Pardeeville, Wisconsin; Michael Sherman, of Plymouth, Minnesota; and Justin Silvis of McFarland, Wisconsin.

“It’s truly an honor for me to be here today to commission these cadets and midshipmen as military officers,” said Evans. “The University of Wisconsin has a long history and tradition dating back to the first World War of educating and commissioning military officers to serve and protect our nation. This legacy that we continue with today’s commissioning is a symbol of America and all that we stand for.”

Evans, who was himself an NROTC midshipman, thanked and congratulated the ROTC instructors and staff at Wisconsin for ensuring each cadet and midshipman received the best training to become military officers. He also acknowledged and welcomed to the Navy, Marine Corps, Army and Air Force all the family members in attendance.

“Our nation is strongest when we draw from all of our strengths and we give our best people every opportunity to serve,” Evans told the soon-to-be officers and their families in the audience during his keynote speech. “Remember your families are definitely the strength behind you and the support behind our military. Remember the sacrifices and challenges they have made for you to pursue your degree, participate in ROTC and begin your military career,” Evans said.

Following his speech, Evans led each cadet and midshipman in reciting the oath of office and then each member had their ranks affixed to their shoulders by family members.

“This was a celebration and culmination of all the work I’ve completed here at the university and being commissioned means an opening of a new chapter in my life,” said Tschida, who was commissioned as a surface warfare officer and will serve on the guided-missile cruiser Lake Champlain as the first lieutenant. “I’m excited that I’ll be working with sailors and other officers and have a real leadership position and I’m really excited to learn from them.

“It’s awesome to see her start this career that I’ve enjoyed and think so highly of,” Master Chief Tschida said. “I know she will do great things and I’m very proud of her.”

He also gave his daughter her first salute.

For twin brothers and Marine Corps 2nd Lieutenants Kirchenwitz, it was an honor to be commissioned together.

“To get the opportunity to graduate and then be commissioned with my twin brother is awesome,” Cogan Kirchenwitz said.

Cole Kirchenwitz said, “to have this chance to celebrate our accomplishment in this way, finally, is very rewarding.”

Each of the Kirchenwitz brothers had their 2nd lieutenant gold bars pinned on by their father, retired Marine Corps Gunnery Sgt. Patrick Kirchenwitz, and their mother Lori. Their grandfather, also in attendance, served as a U.S. Navy Radarman 2nd Class on board the cruiser Canberra in the blockade against the Soviet Union during the 1962 Cuban Missile Crisis.

“This is pretty big to see both my sons being commissioned today,” said Gunnery Sgt. Kirchenwitz, who also presented the first salute to his sons. “It’s legacy stuff – my dad was in, I was in. It continues to build on our families’ military legacy. You have to give a little bit to get something back.”

After the ceremony family and friends congratulated the newly commissioned officers. Many of the parents present described the moment watching their children being commissioned as one of the proudest in their lives.