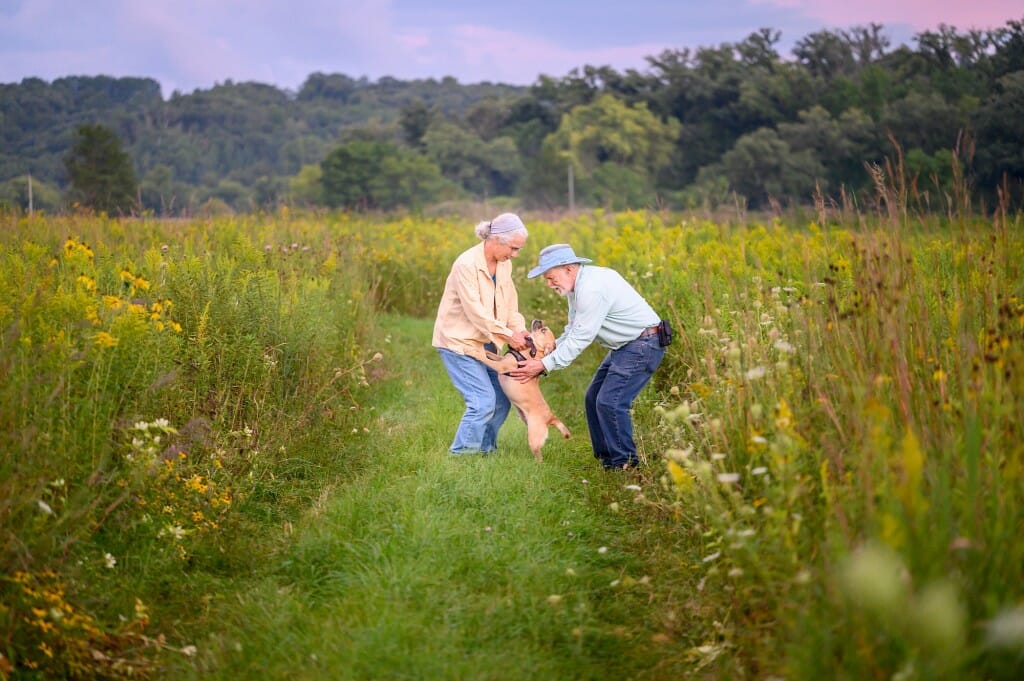 Steve Carpenter, director emeritus of the Center for Limnology and Stephen Alfred Forbes Professor Emeritus in the Department of Integrative Biology, and Susan Carpenter, Wisconsin Native Plant Garden Curator at the UW Arboretum, are pictured with their dog Jasper on prairie they are restoring in the Driftless Area. Photo: Althea Dotzour

For more than four decades, Steve Carpenter has studied lakes as ecosystems in which all parts — from living organisms like fish and weeds to the mud found on lake bottoms — interact to influence lake health. He’s keenly interested in what contributes to lakes that thrive and what threats to lake ecosystems push them to a tipping point so extreme, the entire system collapses.

Susan Carpenter, on the other hand, has spent most her career focused on the land. As curator of the native plant garden at the University of Wisconsin–Madison Arboretum, she spends her days tending black-eyed Susan and blazing star, while keeping watch over and protecting native bees, including the rare and endangered rusty-patched bumblebee.

Steve retired in 2017, after decades as a professor of limnology (the study of freshwater) and eight years as director of the UW–Madison Center for Limnology. Susan continues her work at the UW Arboretum, where she also conducts public outreach and education. But together, the couple — they married in 1979 after meeting in graduate school at UW–Madison — now also spend their time restoring and conserving 100 acres of prairie, stream and bluff in Wisconsin’s Driftless Area — so called because the glaciers that shaped so much of the state have never touched this region.

Their work on the land sits at the intersection of their professional lives and their personal passions. 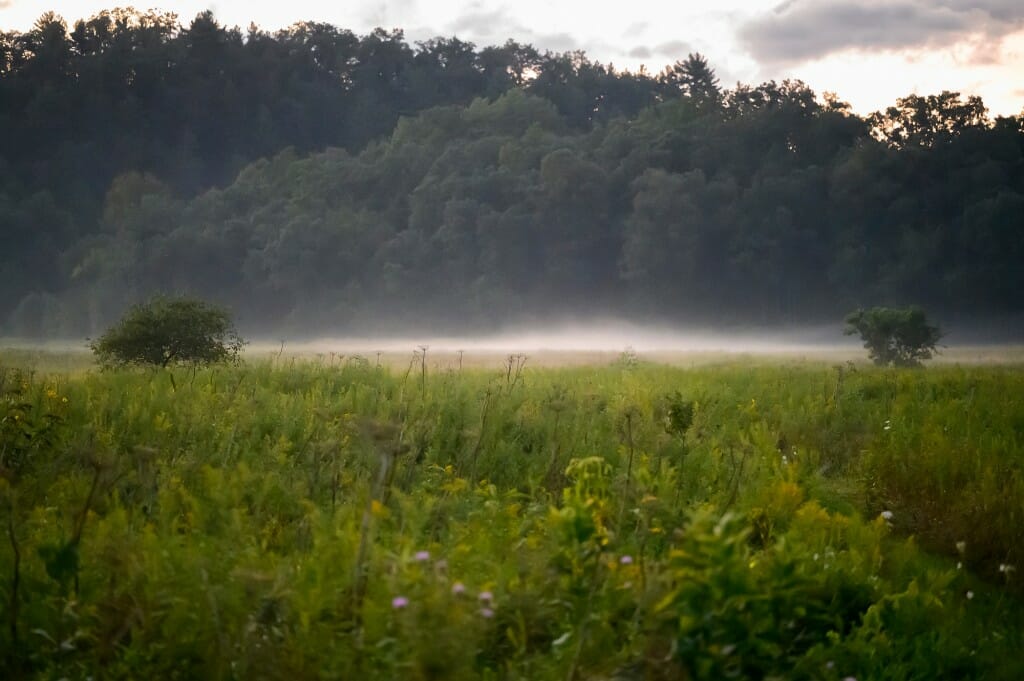 1 The Carpenters have been stewards of this land — encompassing two bluffs, wet prairie, woodland and stream — for 20 years. 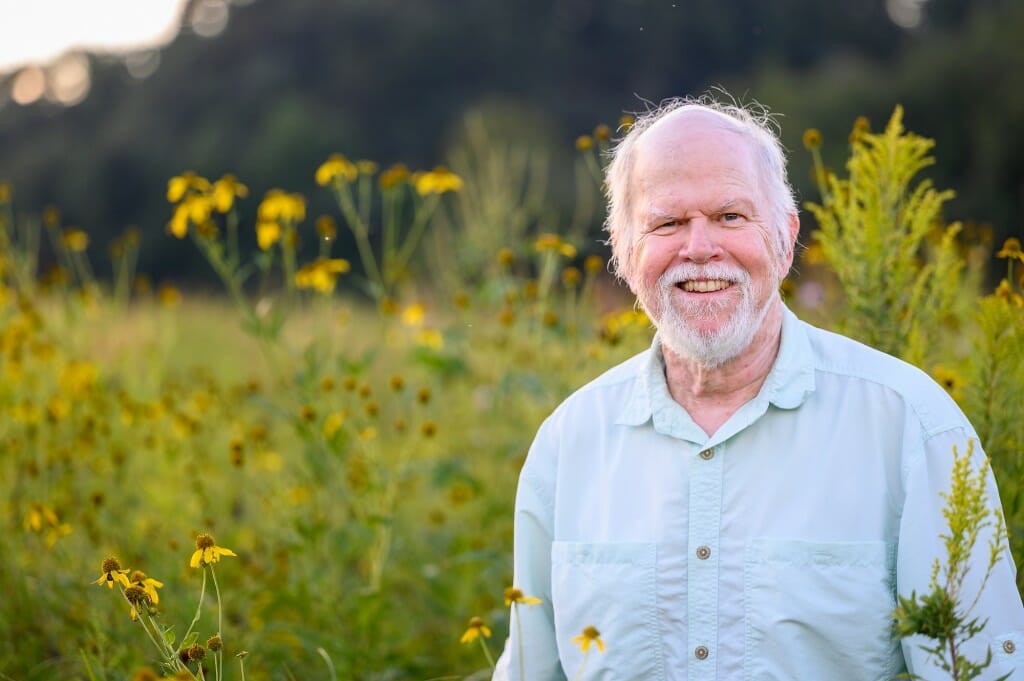 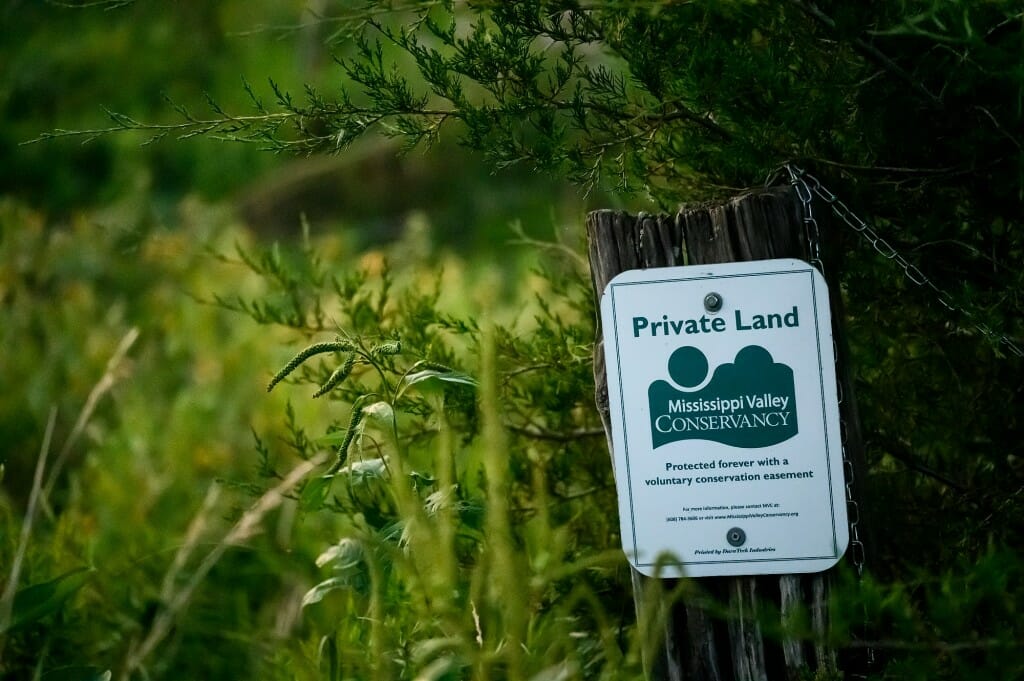 3 The Carpenters donated the conservation easement to the Mississippi Valley Conservancy more than a decade ago. Steve — who even in retirement continues to write grants, collaborate with scientists in Madison and across the globe, and accept numerous top honors — is using money from the Blue Planet Prize he received this year to invest even further in the land. The prize is awarded annually to people or organizations that have achieved or applied scientific research to help provide solutions to global environmental problems. 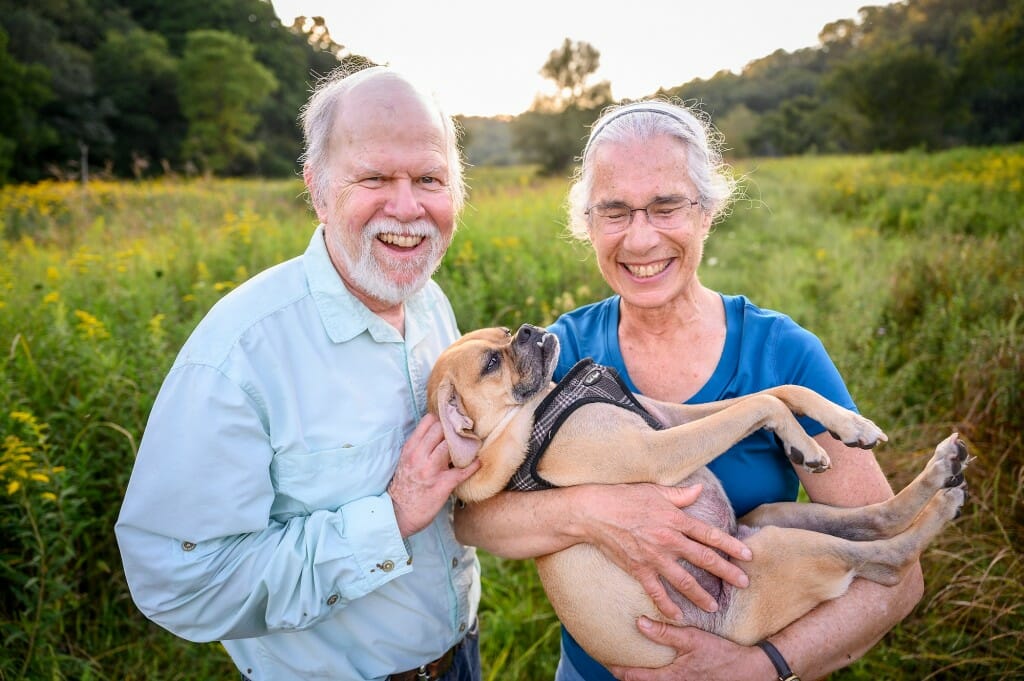 4 “Oh, hey, I’m covered in botany!” Steve exclaimed after looking down to find a number of seeds hitch-hiking on his clothing as he and Susan walked through the prairie they have spent years conserving. “It’s stick seed!” he said, before Susan corrected him: “No, it’s Desmodium.” 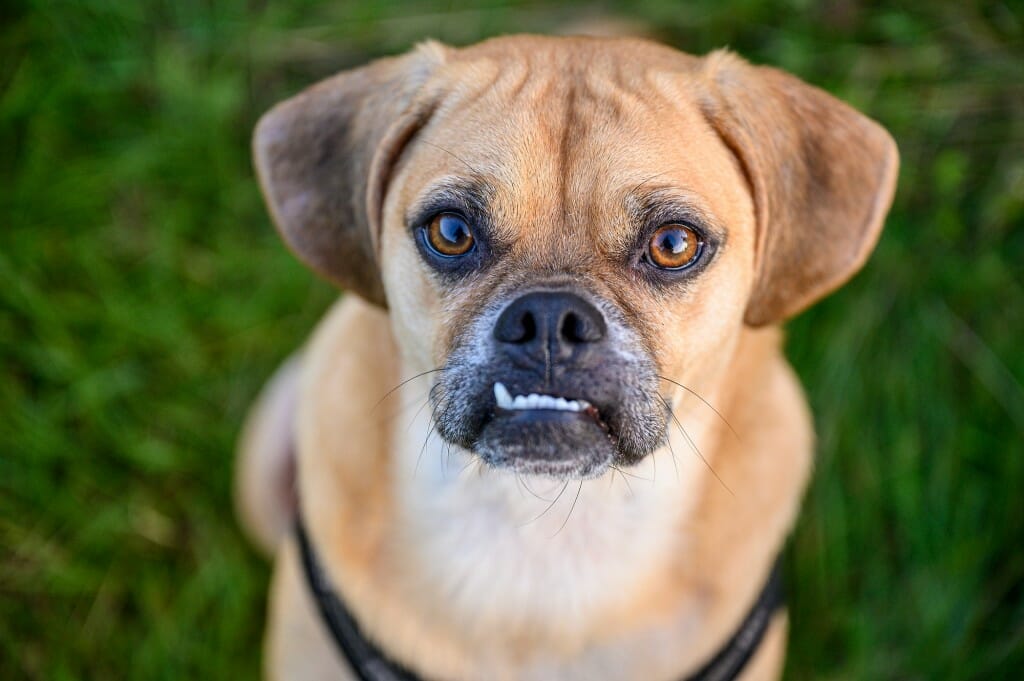 5 The couple were joined on the land by their dog Jasper. Jasper belonged to their late son, Paul, and the puggle has been a special addition to the family. Jasper loves traipsing through tall plants and rolling in puddles. Prairies are especially good at absorbing and storing excess water and contribute to flood resilience in vulnerable regions, an attribute that makes their restoration especially important as climate change contributes to greater rainfall events. 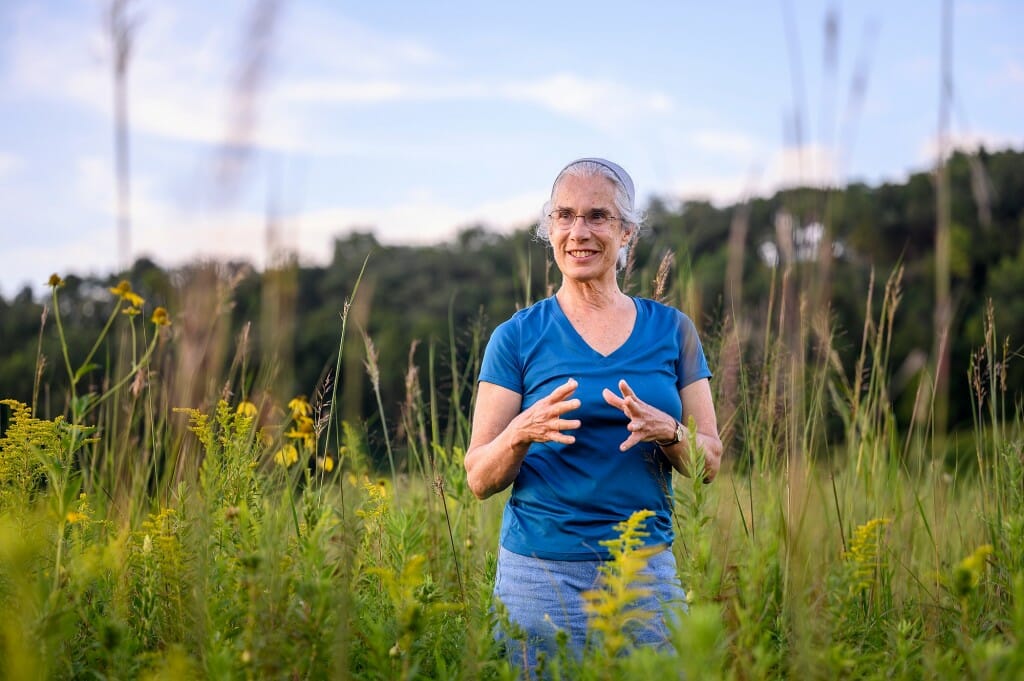 6 Susan explained that she has found at least eight species of native bumblebee on their property, including the elusive rusty-patched. She pointed out bees wriggling their way into blooming cream gentian flowers, and then backing their way out of the flowers' narrow openings, pollen in tow. 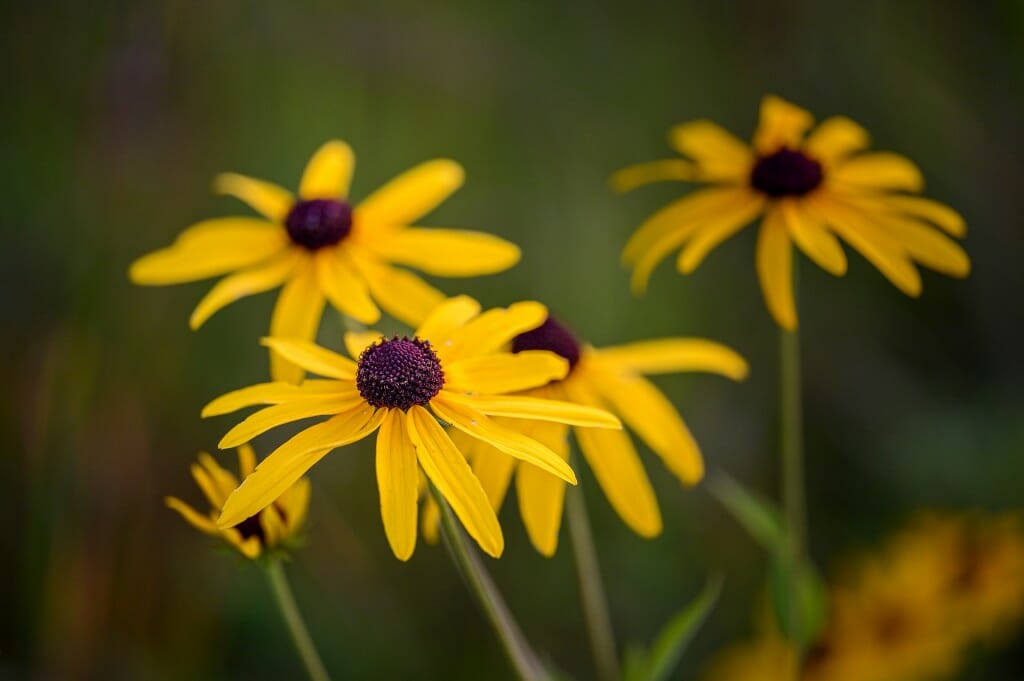 7 According to the Wisconsin Department of Natural Resources, before European colonialists arrived, Wisconsin had 2.1 million acres of native prairie. Today, fewer than 10,000 acres remain, and much of them as remnant prairies that are too small to realize the full benefits a prairie provides to the landscape. 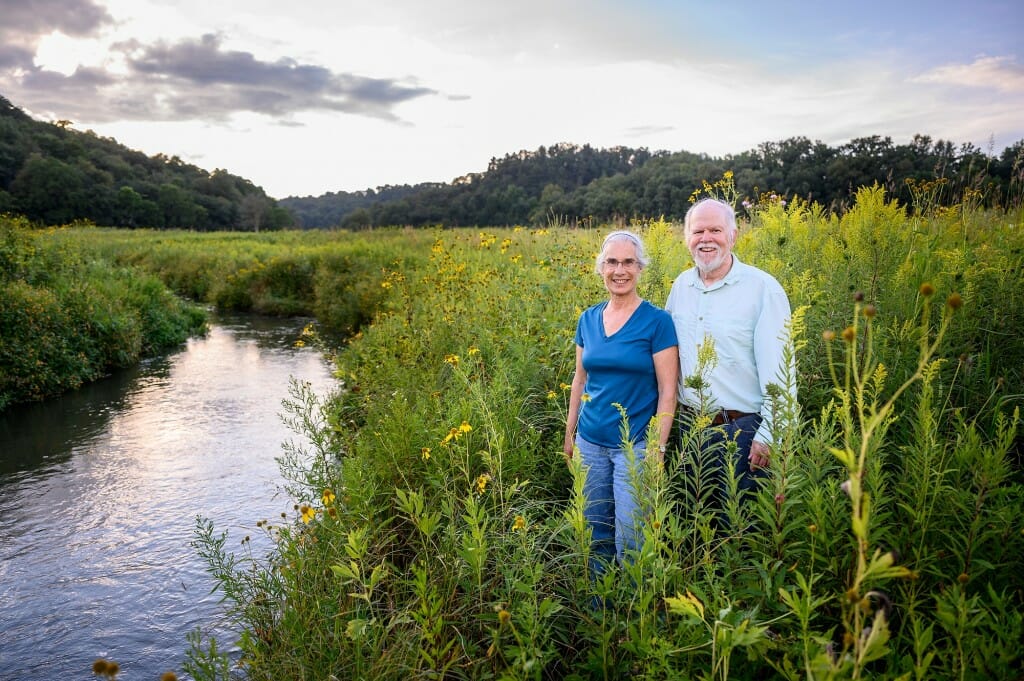 8 Fire is an important element of prairie health, helping to eliminate invasive species, restore lost nutrients to the soil and prevent woodland species from taking over, but European settlers largely eliminated the practice. Wisconsin's prairies once burned naturally following lightning strikes, or through the activities of Native American people who performed burns to manage the land and provide access to food. Today, the Carpenters conduct prescribed fire on the land; the wet prairie can be burned annually, while the dry prairie burns every three to five years.

In late August and into September, plants like Indian grass, New England aster and goldenrod are in full bloom on the prairie. Birds dive for insects. Mosquitoes swarm in abundance. A cool wetness settles over the land, as the setting sun peeks over bluffs through retreating rain clouds. “The Earth is just a big lake with a few continents floating around on the crust,” Steve said. “The principles of limnology apply perfectly to the Earth system.”

All photos by Althea Dotzour, UW–Madison

The Carpenters also acknowledge “the neighbors and farmers who have participated in stream restorations that benefit the land” and have made important contributions to conservation efforts over the years. Steve says: “The high quality of the land today owes a lot to them as well as us.”

In addition, the Carpenters’ efforts have also been aided by the non-profit Trout Unlimited and the United States Department of Agriculture and Natural Resources Conservation Service.