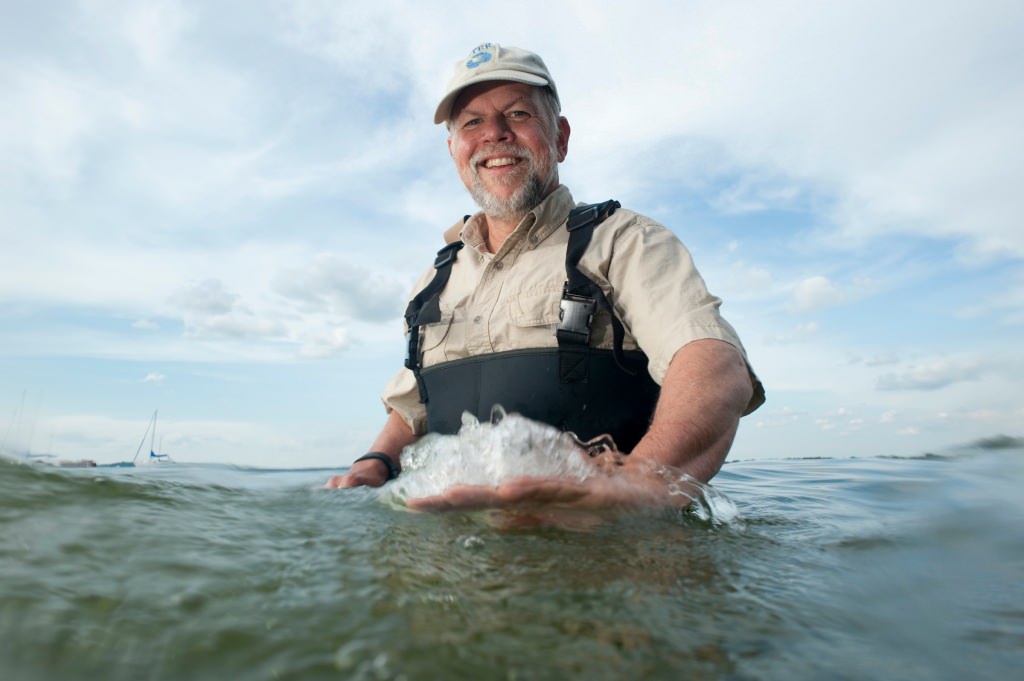 It’s been nearly six months since Steve Carpenter officially stepped down as director of the UW–Madison Center for Limnology. Yet, despite updating his resume with the title “free-range scientist,” he is still trying to figure out how to not come in to the office.

“One thing I’m working on is how to retire, which I have so far completely failed at,” says Carpenter, the Stephen Alfred Forbes Professor of Integrative Biology (formerly Zoology).

Case in point: He never did go bow hunting this season. Even though he bought his first bow and found enough time to practice to get comfortable from 50 yards, he didn’t put it to much use. “Some of it was rain, but why couldn’t I make more time? It wasn’t always rain,” he laments.

The problem is there’s still so much science to do.

For example, Carpenter recently attended an event on the “roots of creativity and innovation in science” at the National Academy of Sciences (NAS) campus in Irvine, California. It was an invitation-only affair for NAS members like him and a select group of actors, poets, writers and filmmakers.

As with so much else in life, Carpenter found this combination of art and science too exciting to refuse. He has a hard time saying “no” to new ideas and collaborations, which probably helps explain his impressive career. 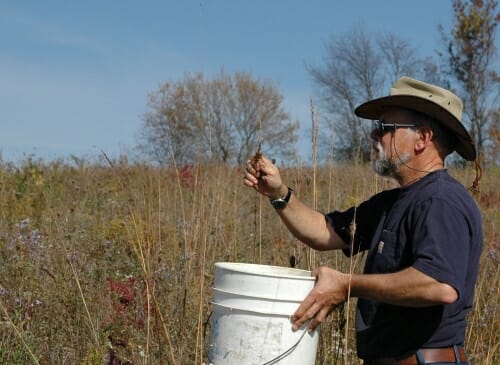 Steve Carpenter collecting Indian Grass seed in an effort to restore native prairie on a parcel of land he owns west of Madison. He maintains a small cabin on the property, where he also hunts. Photo courtesy of Steve Carpenter

Not many scientists bear the list of accolades that follow Carpenter’s name. He is a fellow of the American Academy of Arts and Sciences; former president of the Ecological Society of America; co-founder and editor of the scientific journal Ecosystems; and recipient of the 2011 Stockholm Water Prize, widely regarded as the “Nobel Prize” of freshwater sciences.

He has published five books and nearly 400 journal articles. Those articles have been cited close to 100,000 times in other research papers, a rare accomplishment and a signal of his profound impact on the ecological sciences.

“If you went to any freshwater research institute in the world and asked who the leading scientist was in their field, they would all say ‘Steve Carpenter,’” says Jake Vander Zanden, Carpenter’s successor at the Center for Limnology. “Steve helped change not only the way we study freshwater systems, but also how we manage them and work to conserve them.”

From Ozark Mountains to Wisconsin lakes

Carpenter was born in Missouri, where the Ozark Mountains and summers spent on his grandfather’s farm fostered in him a love of the outdoors. But the family moved to Washington, D.C., when Carpenter was still young and it wasn’t until college that freshwater ecosystems sparked his curiosity.

In fact, he wasn’t particularly interested in the sciences at all, Carpenter says, until his first ecology class at Amherst College in Massachusetts. “Then it just clicked,” he says. “I loved the way it used biology and chemistry and physics to explain how systems worked.”

Carpenter signed on for a research project with his professor, Stuart Fisher, on aquatic plants in the nearby Fort River. There, an exemplary career in ecology was born.

Upon graduation, at the suggestion of an advisor, Carpenter looked to the University of Wisconsin–Madison to continue his education. It was a good fit, Carpenter says, especially because in his field of aquatic sciences it had been “the place to be for almost 100 years.”

During his first stint in Madison, Carpenter got to know the Madison lakes — especially Lake Wingra and Lake Mendota — while working on joint graduate degrees in botany, limnology (the study of freshwater) and oceanography. He also met Susan Moths, a West Coast-transplant and fellow graduate student. The two were married after finishing their respective degrees in 1979. 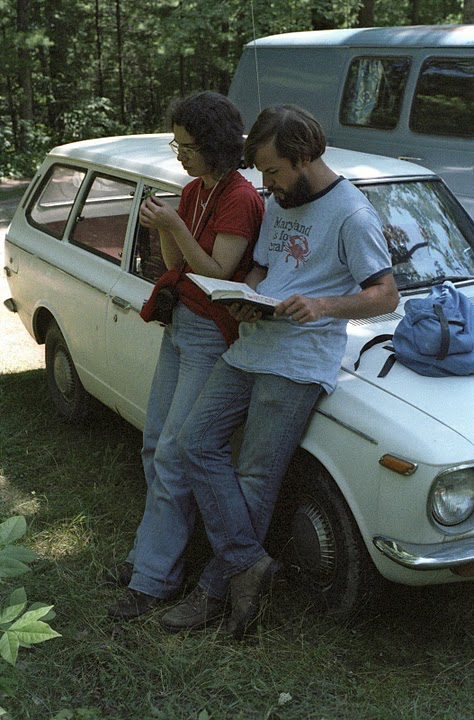 Steve and Susan Carpenter on a field trip with the UW–Madison Department of Botany to Pine Lake near Eau Claire, Wisconsin, circa 1978. Photo: Craig Smith

Carpenter took a job at the University of Notre Dame as an assistant professor and chief architect of the research program at the University of Notre Dame Environmental Research Center (UNDERC). The facility straddles the border of far-northern Wisconsin and Michigan’s Upper Peninsula. Despite the long commute from South Bend, Indiana, Carpenter says the fit was ideal for his personal interests: UNDERC is surrounded by lakes.

“Susan and I loved to camp and hike, so we’d been all over Wisconsin by the time we’d left. And we’d been up North a lot,” Carpenter says.

But UNDERC appealed to his professional interests as well. It was already well-known in limnological lore.

The facility was home to “Peter” and “Paul” lakes, two small bodies of water that became the subjects of some of North America’s first whole-lake experiments. They were created in 1951 by Arthur Hasler, a professor of limnology at UW–Madison with his own impressive track record, who separated one body of water into two using an earthen dike in order to conduct comparative studies between them.

It was with this history in mind that Carpenter took the job, revitalizing Peter and Paul’s roles as lakes designed for real-world experiments. It also led to one of his most important scientific studies.

A controversial study leads to a career of big ideas

In 1985, the scientific journal BioScience published a paper titled: “Cascading Trophic Interactions and Lake Productivity.” A stimulating title it may not be, but in the world of ecology, it was a bombshell.

“It was a very controversial idea,” Carpenter says, recalling confrontations over the paper with colleagues at scientific conferences. As the lead author, he bore the brunt of it. “We were just attacked,” he says. “I mean people were just really angry. It totally upset their worldview.”

At the time, Carpenter says, the accepted idea in lake ecology was that nutrient runoff — specifically, the phosphorus found in fertilizers — was solely responsible for the greening of North American lakes and increases in toxic algae blooms. But a handful of papers had shown that phosphorus could only account for half of these changes.

So, along with Center for Limnology colleagues Jim Kitchell and James Hodgson, Carpenter set out to test the status quo. Using UNDERC’s lakes as living laboratories, the limnologists launched the “trophic cascade” project.

They began a series of whole-lake experiments, like one in which they increased bass populations in one lake while dumping minnows into another. They found that by tweaking one end of the food web, they could create a cascade of impacts all the way up or down the chain.

For example, in the bass-dominant study lake, smaller “forage” fish species were gobbled up by the larger fish. Those foragers would have eaten tiny floating animals called zooplankton; zooplankton eat a lot of algae. When bass were dominant, zooplankton thrived, algae levels stayed low and the water was clearer.

The paper established that phosphorus was only part of the story. Ecosystems are complicated and dynamic, a meshwork of interconnected parts. 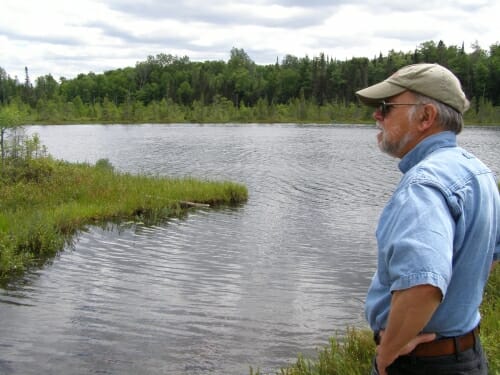 Steve Carpenter stands on a berm between Peter and Paul lakes at the University of Notre Dame Environmental Research Center. At the time, the study lakes were being used for a study of early warning indicators of harmful algae blooms. Photo: Adam Hinterthuer

This early epiphany appealed to Carpenter’s motivations to pursue freshwater ecology in the first place: Variables from chemistry to physics to biology all played a role in how an ecosystem functioned. As he is fond of saying, “It’s not rocket science. It’s far more difficult.”

Three years after this landmark paper, in 1988, a position opened up at the Center for Limnology back on the shores of Lake Mendota. It was an opportunity Carpenter couldn’t pass up. He and Susan, who today is a native plant gardener and resident bee expert at the UW Arboretum, made the move back to Madison.

“We’d always loved Madison,” Carpenter explains,” and by then I had a thriving, funded research program up on the UNDERC lakes and this is much closer — the drive is half the distance and you don’t have to get through Chicago. You just hop in a car and go.”

Since then, Carpenter has contributed many more big ideas to the field of ecology. He has been at the forefront of concepts like detecting early warning signs of ecosystem collapse, defining the conditions, or “safe operating spaces,” in which an ecosystem can function normally. And, after a sabbatical spent learning economics, he helped promote the study of “ecosystem services” — the benefits humans and environments derive from healthy ecosystems.

“Steve is extremely talented at identifying emerging trends in ecology,” says Vander Zanden. “He sees the bigger picture of what we’re all studying and how it points toward these bigger questions and concepts.”

Embracing team science and the next big thing

Carpenter is also adept at a less-heralded but equally important part of the scientific process, says Monica Turner, Eugene P. Odum Professor of Ecology and integrative biology at UW–Madison. His skills as a scientist are matched by a willingness and ability to collaborate.

“Steve has helped all boats to rise,” Turner says, “not just his own.”

She credits Carpenter for “active support, praise and commitment to his colleagues,” and notes how his research helped establish UW–Madison as a leader in the ecological sciences. He fostered collaborations with researchers across departments, from engineering and economics, to microbiology and even sociology.

Michael L. Pace, a professor in the Department of Environmental Sciences at the University of Virginia, concurs with Turner’s assessment. “It is hard to think of another scientist who makes those working with him so much better,” he says.

Carpenter says the enthusiasm of other scientists has helped fuel his collaborative spirit, as has his talent for “setting big goals and mapping the way there.”

It has led him to notable roles in many collaborations, from his original “trophic cascade” project, to the presidency of the Ecological Society of America, to a stint directing the North Temperate Lakes site of the NSF’s Long-Term Ecological Research program.

One of the most rewarding experiences, he says, was serving as a working group co-chair for the Millennium Ecosystem Assessment project, a massive, global scientific undertaking launched in 2000 by then-secretary general of the United Nations Kofi Annan. More than 1,000 researchers from across the globe worked together to understand and assess the consequences of ecosystem change for human well-being and outline actions needed to protect people and the ecosystems they rely on. 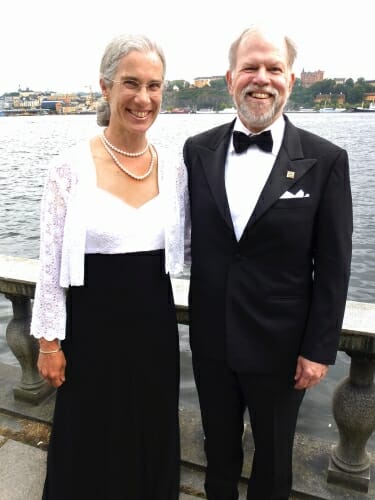 “It was one of the coolest things I ever did,” Carpenter says. “Looking back on it, I can’t believe I agreed to … all that travel and putting up with the international bureaucracy, but I’m so glad I did. I learned so much and I think it … transformed ecology into a global science in a way nothing else had ever done before.”

If that sounds like a good stopping point for a career, don’t be fooled. Carpenter isn’t done yet.

At the start of 2018, he published a paper in the journal Limnology and Oceanography. He’s currently part of a research group headed by Turner to study abrupt change in ecological systems. He and Pace are working on a project that will synthesize the 35 years of data collected by the still-running Cascade project. And Carpenter also sees “tremendous opportunity” in analyzing a decade’s worth of data collected by Lake Mendota’s buoy to see how algae blooms correspond to weather patterns.

“I’m probably going to discover that I need a lot of help,” he says. “So I’ll end up knocking on CFL faculty doors and saying: ‘Hey, would you like to do a cool science project?’”

When reminded that he’s on record saying he’s trying to learn how to retire and that bow-hunting season is short, Carpenter isn’t too concerned. “I only retired a few months ago,” he says, “so I’ve got a lot of time to work on it.”

Besides, he muses: “The world is full of interesting stuff to do. Just full of it.”