Zika infections could be factor in more pregnancies 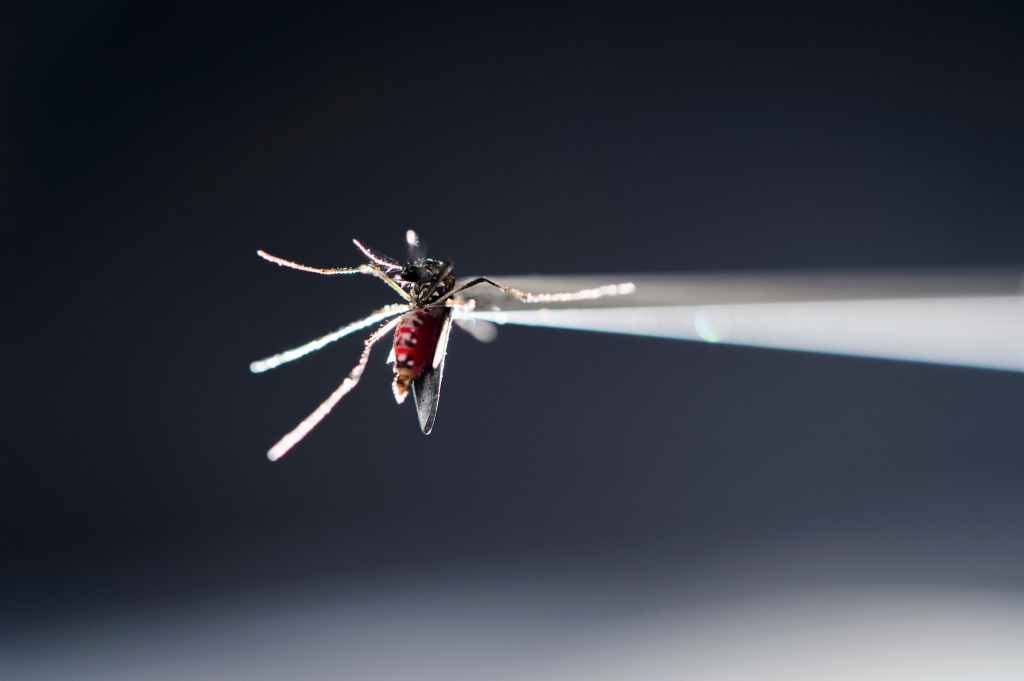 In a UW–Madison lab, a vacuum tube holds a blood-fed strain of Aedes aegypti mosquito, which can carry the Zika virus. New research suggests the virus poses a wider threat in human pregnancies than generally appreciated. Photo: Jeff Miller

Zika virus infection passes efficiently from a pregnant monkey to its fetus, spreading inflammatory damage throughout the tissues that support the fetus and its developing nervous system — suggesting the virus poses a wider threat in human pregnancies than generally appreciated, University of Wisconsin–Madison scientists have found.

The UW–Madison researchers, along with collaborators at Duke University and the University of California, Davis, published their study of Zika-infected pregnancies today in the journal PLOS Pathogens.

The UW researchers infected four pregnant rhesus macaque monkeys at the Wisconsin National Primate Research Center with a Zika virus dose similar to what would be transferred by a mosquito bite, and found evidence that the virus was present in each monkey’s fetus.

“That is a very high level — 100 percent exposure — of the virus to the fetus along with inflammation and tissue injury in an animal model that mirrors the infection in human pregnancies quite closely,” says Ted Golos, a UW–Madison reproductive physiologist and professor of comparative biosciences and obstetrics and gynecology. “It’s sobering. If microcephaly is the tip of the iceberg for babies infected in pregnancy, the rest of the iceberg may be bigger than we’ve imagined.”

Three of the fetuses involved had small heads, but not quite so small relative to normal that they would meet the human standard for diagnosing microcephaly — the most striking and widely discussed result of Zika infection since Brazilian doctors raised alarm in 2014 of many babies with arrested brain development.

The new study did not find abnormal brain development, but the researchers did discover unusual inflammation in the fetal eyes, in the retinas and optic nerves, in pregnancies infected during the first trimester.

“Our eyes are basically part of our central nervous system. The optic nerve grows right out from the fetal brain during pregnancy,” says Kathleen Antony, a UW–Madison professor of maternal fetal medicine and an author of the study. “So it makes some sense to see this damage in the monkeys and in human pregnancy — problems such as chorioretinal atrophy or microphthalmia in which the whole eye or parts of the eye just don’t grow to the expected size.”

“It’s sobering. If microcephaly is the tip of the iceberg for babies infected in pregnancy, the rest of the iceberg may be bigger than we’ve imagined.”

The similarities between the monkey pregnancies and reported complications in Zika-affected human pregnancies further establish Zika infection in monkeys as a way to study the progression of the infection and associated health problems in people.

“There are so many things about Zika infection we can’t study as well in pregnant humans — or fast enough to make a difference for a lot of people who may be infected,” says Dawn Dudley, a UW–Madison pathology research scientist and one of the lead authors of the new research with Antony and obstetrics and gynecology graduate student Sydney Nguyen.

An animal model opens the door to studying how Zika infection interacts with other infections (like dengue virus), how the effects of early pregnancy infection might be different from later infection, and, according to Dudley, whether quick treatment with some antiviral therapies could manage the damage of what has come to be known as congenital Zika syndrome.

“The precise pathway that the virus takes from mom’s bloodstream to the fetal bloodstream, across that interface, cannot be studied except in an animal model,” says Golos, whose research group found damage from Zika infection in every part of the interface between mother and fetus — the placenta, amniotic fluid in the womb and the lining of uterus.

While the immediate effects may not be as dramatic as microcephaly, “the results we’re seeing in monkey pregnancies make us think that, as they grow, more human babies might develop Zika-related disease pathology than is currently appreciated,” Golos says.