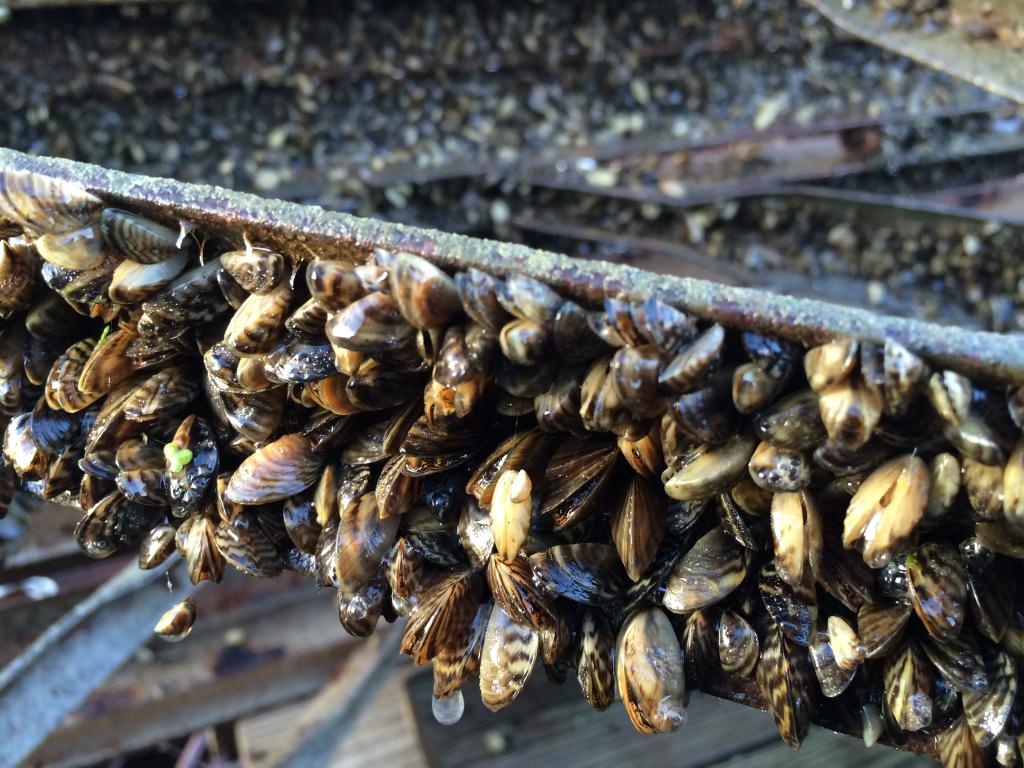 Sometime in the last four months, however, graduate student Mike Spear – who is leading a Wisconsin DNR-backed study on population growth and documenting the impacts of zebra mussels in Madison’s lakes – says his team has started to find them congregating in large numbers all over Lake Mendota.

As recently as July, densities of adult zebra mussels in places Spear was monitoring were about 10-to-15 individuals per square meter, extremely low by standards of the Great Lakes region, Spear says, adding: “about as low as you’ll find them in systems where they’re known to exist.”

However, “we saw a very strong recruitment event in mid-August,” Spear says, “which boosted densities from 10-20 per square meter, upwards of 200 per square meter in some places. If any decent proportion of these young mussels are left by reproduction time next year, I think we will definitely be seeing continued exponential growth of the population.”

Jake Vander Zanden, a professor at the CFL and an expert on aquatic invasive species says there is nothing we can do to stop them. “The question now becomes ‘How big will the zebra mussel population in Madison get?'” he says.

Zebra mussels need hard surfaces like rock, cobble and piers to attach to and grow. Since Madison’s lakes are primarily covered with silt and other soft sediments, the good news is there may not be enough available habitat for the mussels to reach numbers that will dramatically impact them, Vander Zanden says.

However, he warns, it is unwise to underestimate one of the most successful invasive species to ever work its way into the Great Lakes, first discovered there in 1988. Since then, zebra mussels have made their way into each of the five Great Lakes, as well as smaller lakes and rivers throughout the watershed. They have even been found as far away as Louisiana and California.

At this stage, it is impossible to know for sure how a zebra mussel invasion will play out in a particular ecosystem, Vander Zanden says, but there is enough documented impact of similar invasions to have a good idea of what’s in store. 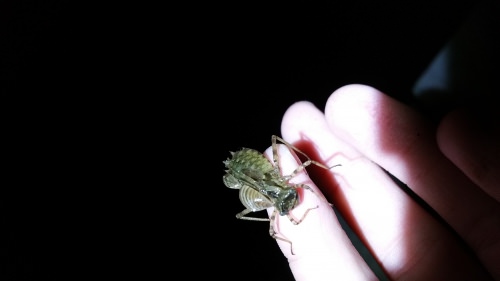 This dragonfly nymph has some unlikely hitchhikers – two zebra mussels – growing on its exoskeleton. The mussels appear to be growing rapidly, considering that the nymph will molt, or shed its skin, several times during the few years it spends in this larval stage. Andy Stevens, University of Wisconsin Sea Grant/Water Resources Institute

For instance, zebra mussel invasions primarily restructure the food web. Zebra mussels are highly effective filter feeders and they essentially suck all of the phytoplankton and algae (or tiny plants) out of the water column. These tiny plants are important food for zooplankton (tiny crustaceans) that are, in turn, crucial to the diets of many small fish, which serve as food sources for larger fish.

In fact, Vander Zanden and a collaborator, Scott Higgins, published a literature review in 2010, which documented known impacts of zebra mussel invasions in lakes and rivers.

According to the report, zebra mussel invasions lead to a 35-to-nearly-80 percent reduction in the levels of phytoplankton and zooplankton living in an invaded ecosystem. The reduction in plankton leads to dramatic changes in water quality – it gets a lot clearer – but that comes at a price.

By pulling food down to the bottom of a lake or river and excreting waste, zebra mussels concentrate nutrients at the bottom of a lake. Since the water near the surface is then clearer, sunlight can filter further down. This leads to an explosion of algae and aquatic plant growth, amounting to a 170 percent increase, the report found.

In Lake Michigan, for example, large mats of an algae called cladophora grow on the tops of zebra mussel beds, before tearing away and washing up onshore where they decay and foul beaches. What’s more, Vander Zanden says, the reduction of plankton and algae in the open water of a lake means less competition for surface-floating cyanobacteria (or blue-green algae) which can take advantage of these altered conditions to form more frequent and potentially toxic blooms.

“The question now becomes ‘How big will the zebra mussel population in Madison get?'”

Other changes may also be in store. Species of fish that eat zooplankton as young, like yellow perch, may suffer as that food source goes away. Swimmers and beach strollers may also find that bare feet and zebra mussel shells don’t mix.

Vander Zanden and Spear says they have received emails and phone calls from local residents reporting zebra mussel sightings. Spear even received a letter with a zebra mussel attached with tape. They have been contacted by concerned citizens who want to organize zebra mussel removal efforts, but Vander Zanden says it’s just not feasible. There are already too many mussels and countless more “veligers” or mussel larvae, to do much about it.

In fact, an experimental control effort by Minnesota’s Department of Natural Resources initially reported promising results, until the mussel population rebounded. Just this year, a new Minnesota-based effort to use a copper-based pesticide was launched, but “control” and not “eradication” was the goal.

Dane County and other Wisconsin residents can take steps to reduce the spread of zebra mussels between waterways. Boaters should look for stowaways on their hulls, motors, anchors and trailers and remove them by scraping or using a pressure washer. Since zebra mussel larvae can sneak into any water aboard a boat, boaters should drain the water from motors, boat bilges, live wells and bait wells, and clean the weeds from the boat, motor and trailer before leaving boat ramps.

Likewise, anglers should check minnow traps for mussels and make sure not to transport bait or water from bait buckets across different waterways.

Mussels can be found in many locations across Lake Mendota and Lake Monona, but they have not yet been detected in Lakes Waubesa, Kegonsa or Wingra.

The Wisconsin Department of Natural Resources is asking area citizens to keep an eye out for and report zebra mussel sightings in the three yet unaffected lakes. They are asking for photos (it’s helpful to use a coin or ruler in the shot for scale), locations and estimates of the number of mussels.

Those willing to take a sample can preserve some mussels in a container filled with clear alcohol at room temperature, or a refrigerated container with water. Gina LaLiberte, the DNR’s water resources management specialist is the main contact – Gina.LaLiberte@wisconsin.gov or 608-221-5377.