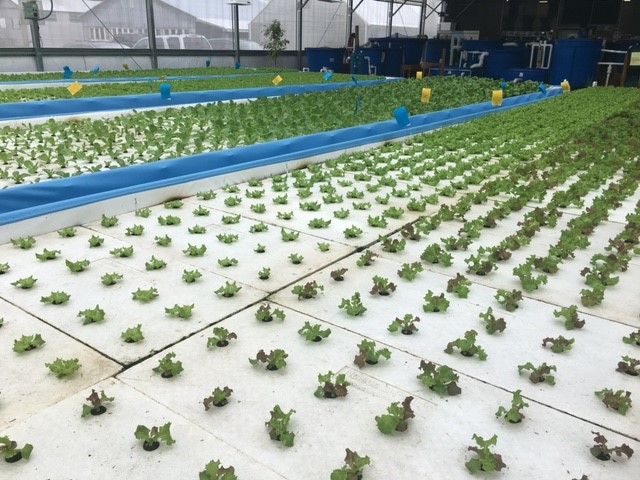 The other part of the Montello-based walleye aquaponics equation is racks of lettuce, fed by water enriched with the nutrients in fish waste. Aaron Conklin

More than a thousand walleye are in the six sets of circular water tanks at the UW-Stevens Point Aquaponics Innovation Center in Montello, Wis. And they swim around in near-total darkness, their environment protected by several sets of pitch-black curtains.

“Walleye are sunset and night-time feeders,” explained Chris Hartleb, UWSP professor of aquaculture and the caretaker of this walleye colony. “This way, they can feed 24 hours a day. Plus, they’re very skittish fish — it takes almost nothing to startle them.”

There’s good reason to keep them calm. These fish are a key part of a two-year aquaculture research project funded by UW–Madison-based Wisconsin Sea Grant designed to compare the production of walleye, a native Wisconsin fish, and saugeye, a natural hybrid of walleye and sauger, in a recirculating aquaculture system and a closed aquaponics system. 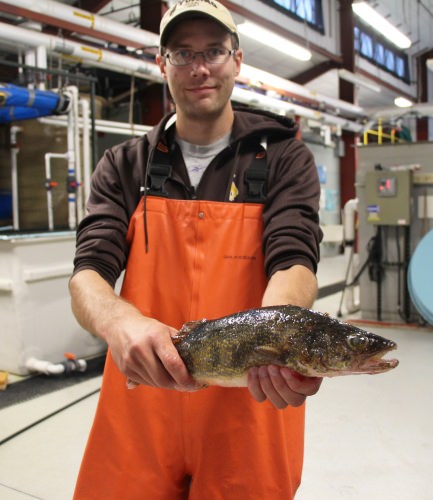 As it reaches the midway point, the project, headed by Hartleb and Greg Fischer, facility operations manager of UWSP’s Northern Aquaculture Demonstration Facility (NADF) near Bayfield, Wis., is looking more promising by the fish tank. Both Fischer and Hartleb spent the last year raising saugeye in tanks with low, medium and high densities at each facility.

“The saugeyes grew really well,” said Fischer. “We reached our target goal of growing a one-pound fish in less than a year at each of the three densities. We even had some fish up to two pounds.”

In a burgeoning industry where, as John Pade, the co-founder of Nelson & Pade Inc., a partner on Hartleb’s part of the project likes to say, “enthusiasm often exceeds knowledge,” Hartleb and Fischer’s research could be critical to showing a new way forward with a new species for Wisconsin aquaculture.

“That’s the question — economically, how does this fit in? “ Fischer asked.  “That’s the big puzzle. Can you do this at a commercial scale? At NADF, we’ve have been investigating and working on walleyes and their hybrids for food fish use for almost 10 years now and this research is critical to move this species forward for sustainable U.S. aquaculture.”

Currently, nearly 90 percent of the aquaculture industry in the United States is focused on tilapia. While there are ways in which that makes sense — the fish grows well in high-density tanks and sometimes returns a good price at market — there are also ways in which it doesn’t. 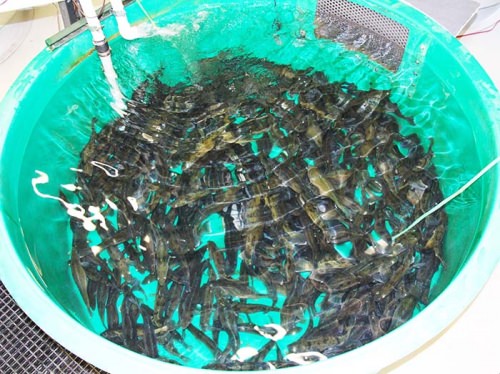 At the UW-Stevens Point Northern Aquaculture Demonstration Facility near Bayfield, Wis. Greg Fisher successfully grew tanks of saugeye to a one-pound marker within the course of a year. Emma Wiermaa

“As a biologist, it’s scary,” said Hartleb. “What if a disease wipes out tilapia fry at nurseries?”

In fact, there are only three nurseries in the United States that provide tilapia fingerlings to aquaculture/aquaponics operations, and two of them are in the Southwest, not far from Mexico, which experienced a major outbreak of the lethal Tilapia Lake Virus earlier this year.

Walleye offers its own economic advantage. One-pound fillets typically fetch anywhere from $14-16 a pound. And as Hartleb is in the process of showing, walleye can be the cornerstone of a successful aquaponics operation. At the Aquaponics Innovation Center in Montello, Hartleb is raising walleye at the same low, medium and high density as the saugeye were.  The water containing the fish waste is drained, filtered and oxygenated, then pumped into tanks to provide nutrients to a wide variety of greens, from multiple types of lettuce to kale.  Hartleb has even taken a stab at growing broccoli.

Hartleb’s also been charting the water chemistry necessary to keep both the fish and the plants healthy and productive. For instance, walleye are a carnivorous fish, which has an impact on the proper nutrient process. (“You may have to support potassium,” Hartleb said.) 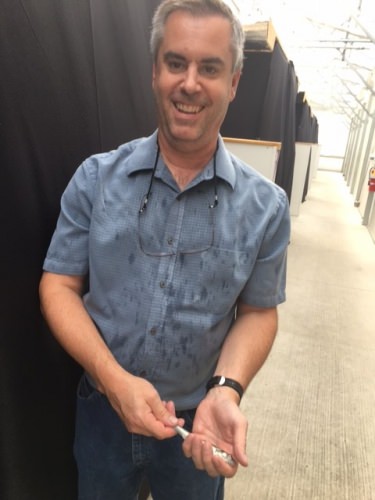 Chris Hartleb presides over more than a thousand walleye, part of a six-tank aquaponics operation designed to see if they can be raised on a commercial scale. Aaron Conklin

Given the dual thrust of an aquaponics operation, that’s not necessarily bad news.

“If you find the lowest density is best, why wouldn’t you grow more plants?” Hartleb asked.

With another year to go on the project, a significant amount of data analysis remains, and a few bottlenecks will need to be resolved before walleye and saugeye can truly go mainstream. The biggest one is the lack of a nursery provider. If a new startup wants to begin raising walleye and saugeye, they need fingerlings. Walleye fingerlings are typically grown for stocking in lakes, not fueling startups, and UWSP NADF doesn’t yet produce enough saugeye fry to become a regional supplier.

“We need a private industry partner to step up to the plate on this aspect of providing biosecure, feed trained, intensively reared fingerlings to support the industry.  We know how to do this successfully and can help with training and setup.” said Fischer.

That’s where the education and outreach piece of the project comes in.

“We have the know-how. We have the tools. We can teach anyone,” said Hartleb

“If we can resolve some of these questions and continuing working with and educating interested fish farmers, I’m confident that walleye and hybrids will be the next big thing for Wisconsin aquaculture.”