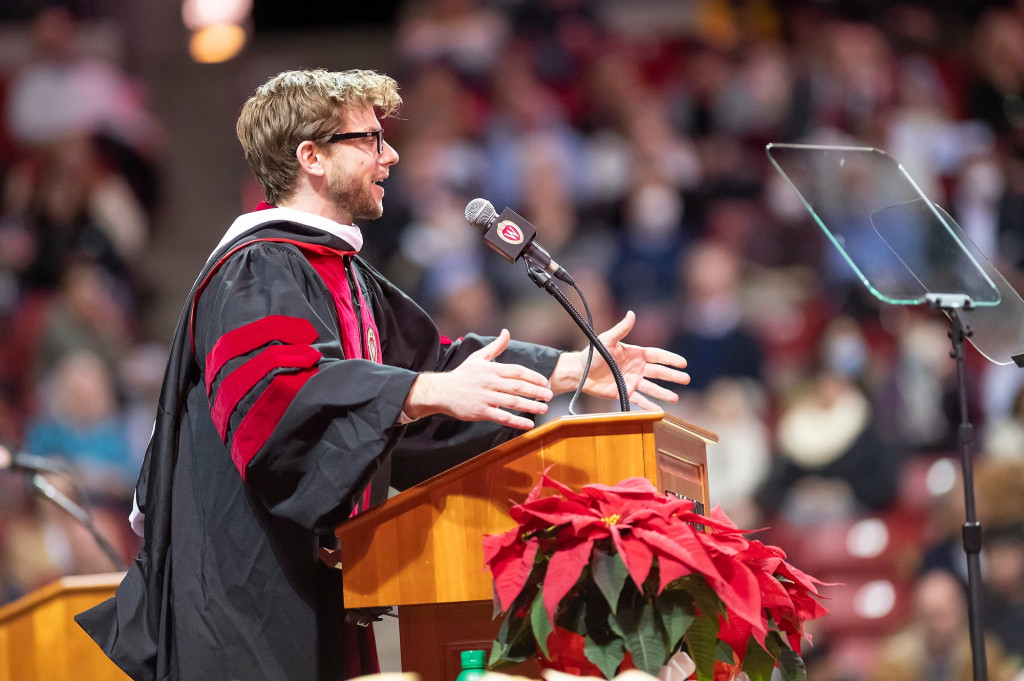 "Your job is to fill your days with what lights your soul," Charlie Berens told the graduates. Photo by: Althea Dotzour 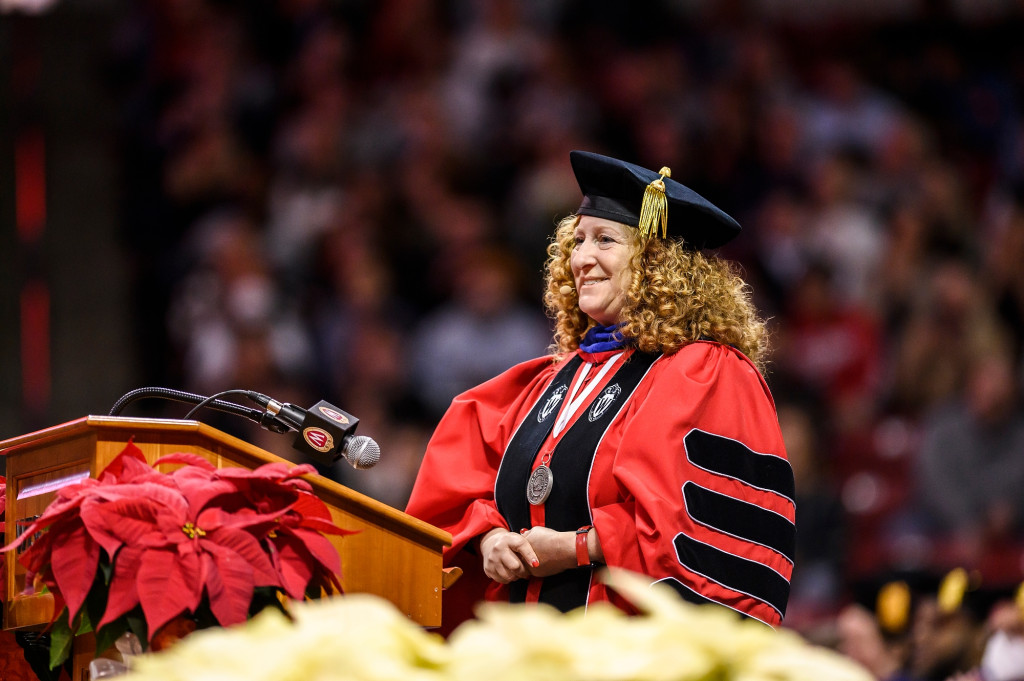 It was Chancellor Mnookin's first UW–Madison commencement. She encouraged the graduates to give themselves and others a little grace in the years ahead. Photo by: Althea Dotzour 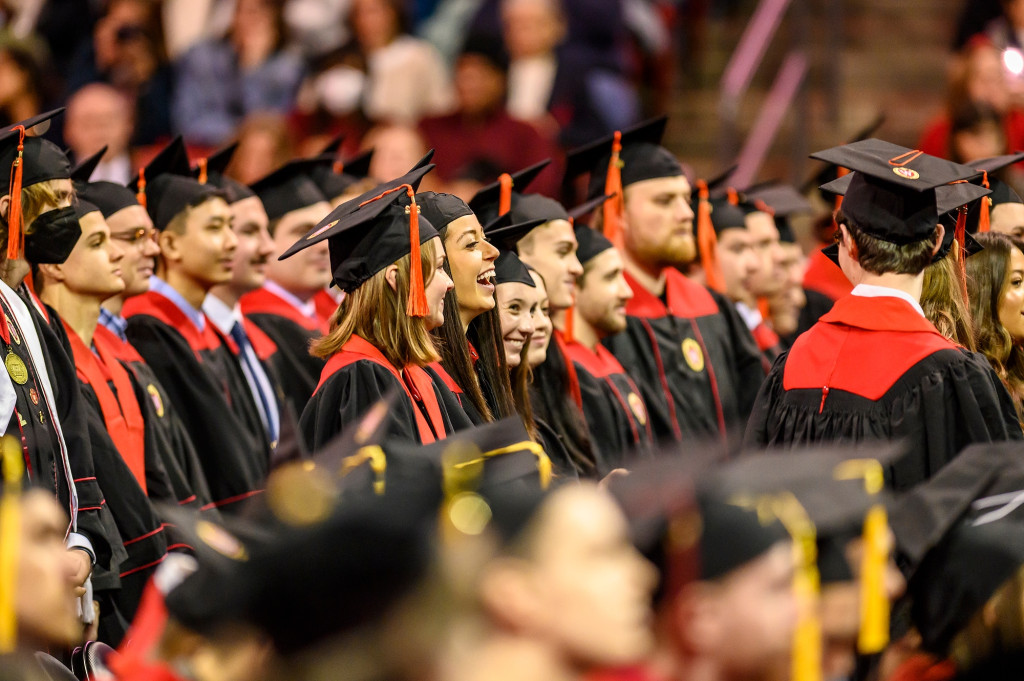 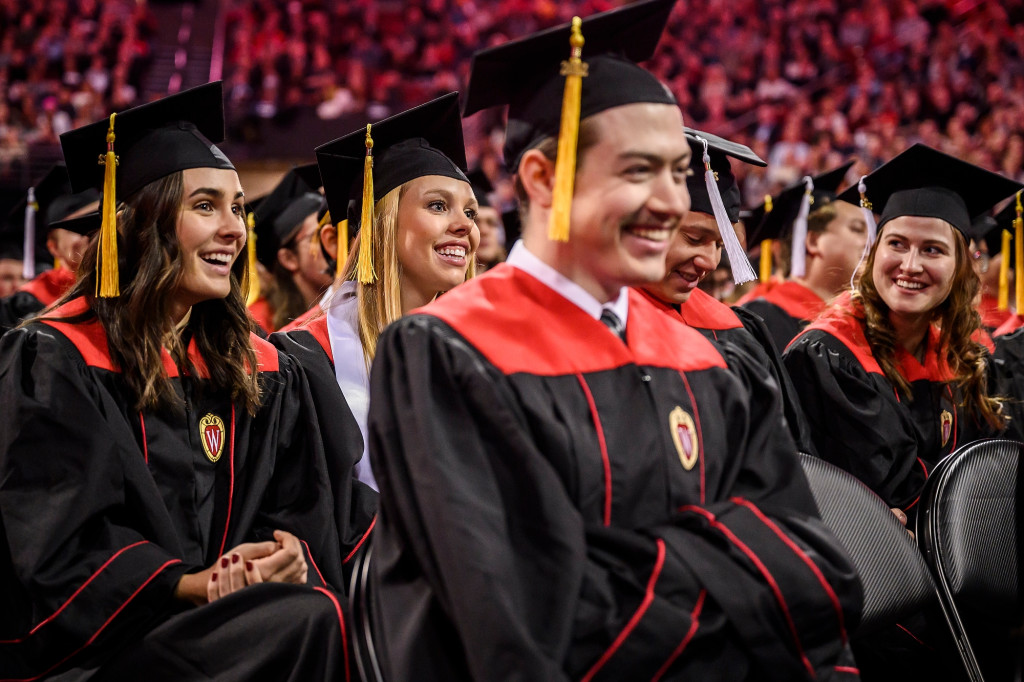 The mood was upbeat at commencement. Photo by: Althea Dotzour 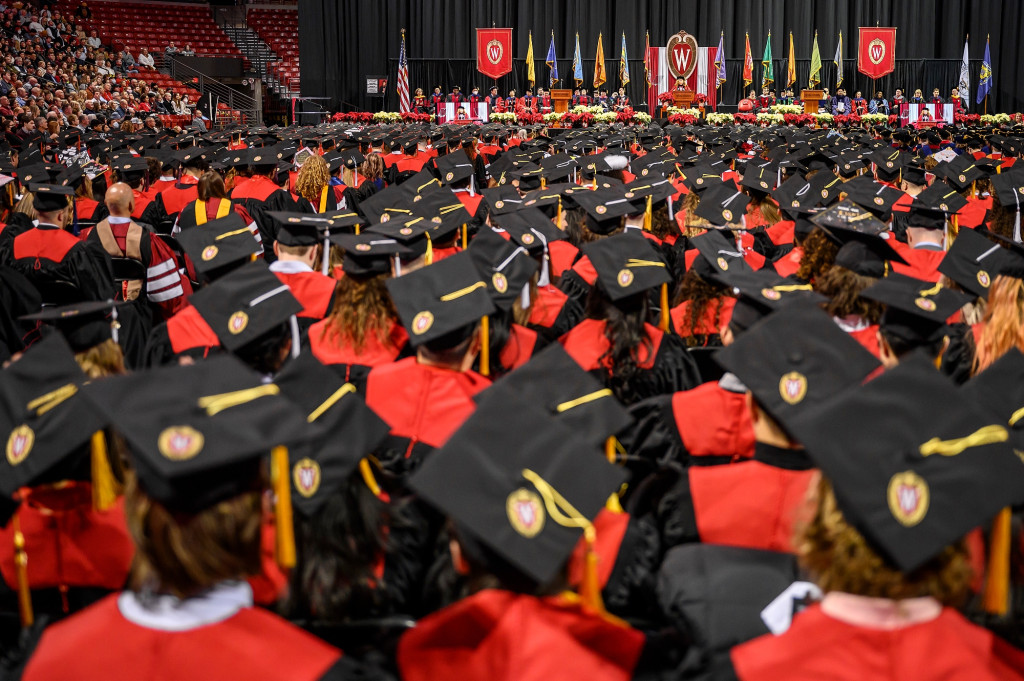 The ceremony was livestreamed so that friends and family from around the world could watch. Photo by: Althea Dotzour 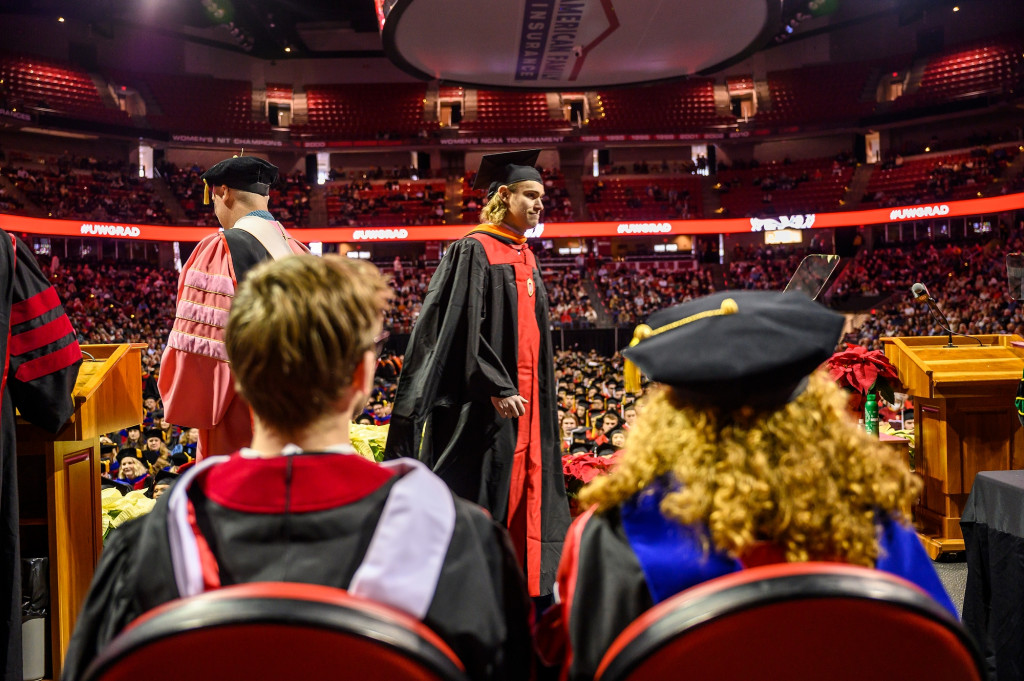 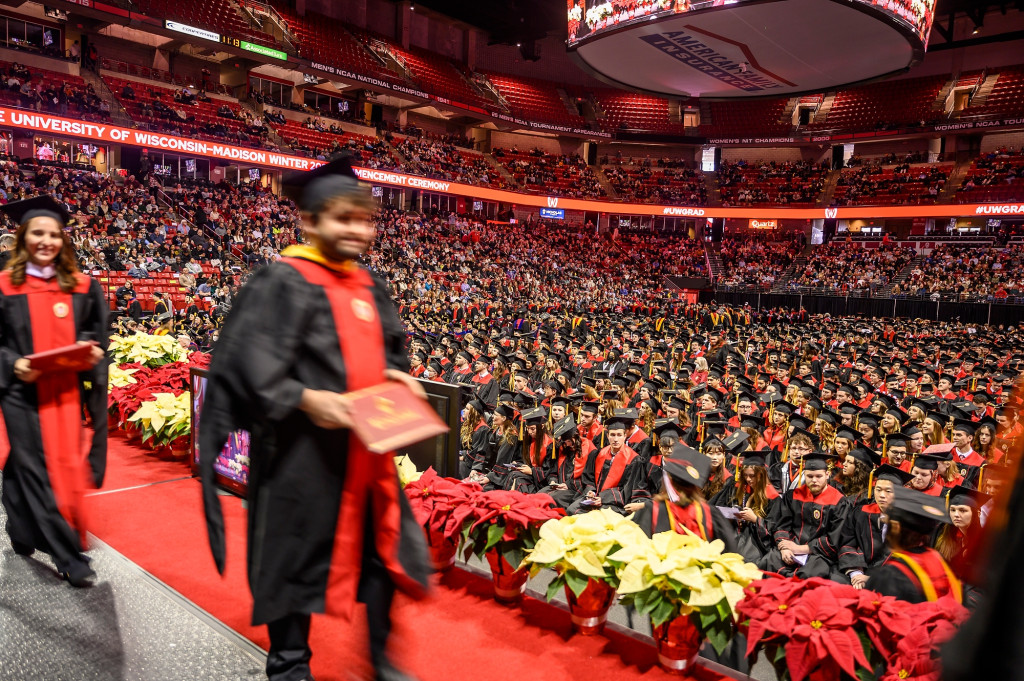 About 1,200 graduates took part in the ceremony at the Kohl Center. Photo by: Althea Dotzour 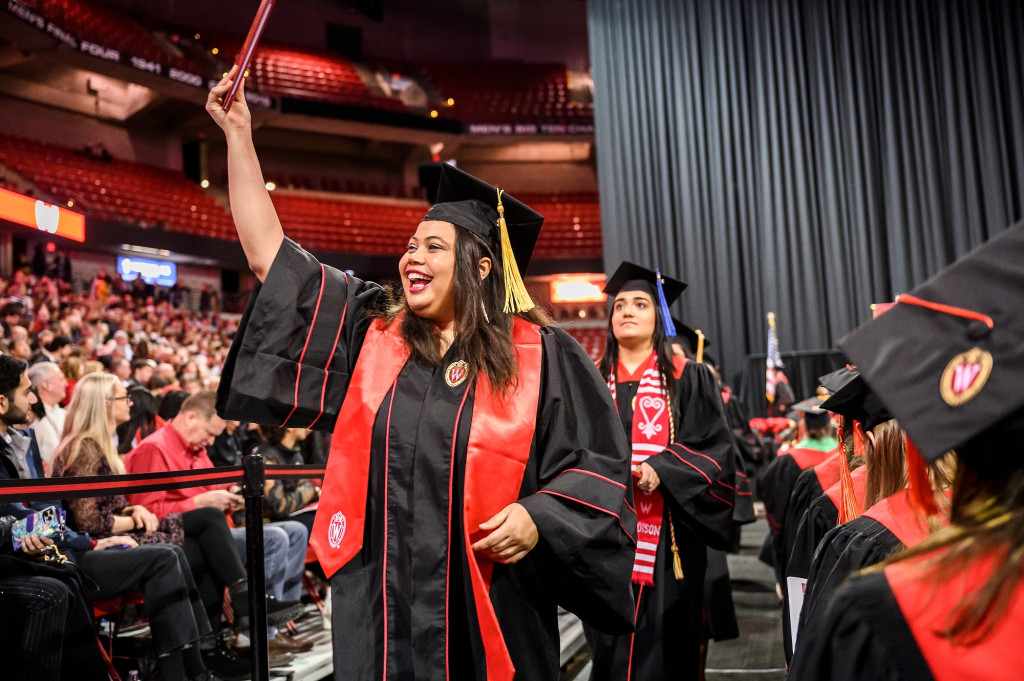 A new graduate celebrates her diploma during the winter commencement ceremony held in the Kohl Center on Dec. 18. Photo by: Althea Dotzour

Comedian Charlie Berens told a crowd at the Kohl Center Sunday that he still dreams about UW–Madison, his alma mater.

In the recurring dream, Berens said he shows up to class to give a speech. But there’s not just one professor there — it’s all his professors. And the dean. And his parents. And the speech is at the Kohl Center, and he has absolutely nothing prepared.

“This is why you never follow your dreams,” he told the audience.

It was unusual advice for a graduation ceremony, but very on-brand for Berens. (He was joking, of course.)

Berens, the creator of the popular “Manitowoc Minute” comedy videos, served as keynote speaker for UW–Madison’s 2022 winter commencement. Just over 1,750 doctoral, master’s, and bachelor’s students earned degrees. About 1,200 of them took part in the ceremony at the Kohl Center. Total attendance, including graduates, was 6,609. The ceremony was livestreamed so that friends and family from around the world could watch. 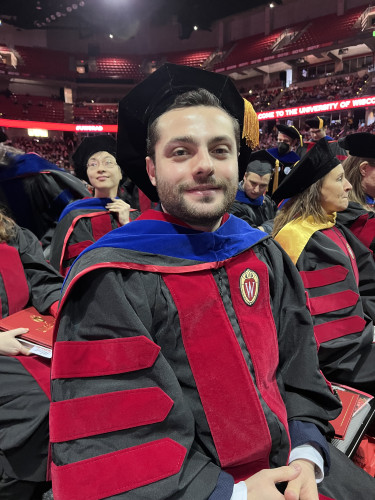 Winter graduate Wissam Kontar traveled continents to study at UW–Madison. Raised in a small village on a mountaintop in Lebanon, he earned a PhD Sunday in civil and environmental engineering. His time on campus was challenging, empowering and life-changing, he said.

“I fell, and rose, and achieved. I think that cycle is something I share with many of my fellow graduate students,” he said.

Student speaker Kirstan Gimse, of Republic, Michigan, took a different kind of journey to the Kohl Center. She dropped out of high school but never gave up on herself. Sunday, she earned a PhD in cellular and molecular pathology.

“We have all come from different places, taken different paths and have different perspectives,” she said from the stage. “It is the culmination of our differences that makes UW–Madison so great.”

Chancellor Jennifer Mnookin, participating in her first UW–Madison commencement, encouraged graduates to give themselves and others a little grace in the years ahead. If they take the kinds of risks needed to do big things, she told them, there will be moments when they drop the ball.

To put those moments in perspective, Mnookin shared some advice that she said came from her younger sister.

“Many of the balls you’ll have to juggle are rubber, but some are crystal,” Mnookin said. “Those rubber balls, they bounce. If you drop one, you can pick it up on the next bounce and try again.”

But the crystal balls don’t bounce, Mnookin said. They break, and there’s just no way to put them back together.

“So in your work life and in the rest of your life, be sure you’re prioritizing what’s critically important — your family, your health, your closest friends, the things at work that really matter — so that when you drop a ball or two, the balls you drop are the rubber ones.”

Emily Casper, who earned a bachelor’s degree in psychology on Sunday, said she spent a lot of time the past few weeks reflecting on her years on campus and what it all means. She doesn’t know what her next step will be, but that’s OK, she said.

“I got an opportunity here to learn more about who I was and who I want to be,” she said. “I know that no matter where I go next, I will have my experiences as a Badger guiding me forward.” 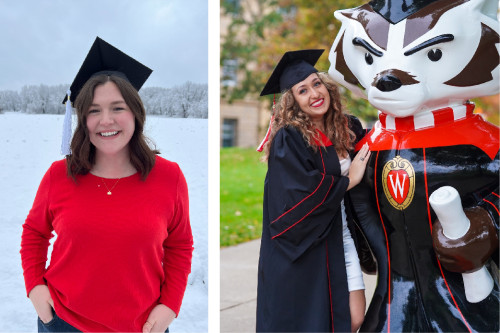 Emilie Springsteen, of Cumberland, Wisconsin, hopes to become a social studies teacher. She earned a bachelor’s degree Sunday with a double-major in history and theatre and drama.

“It’s because of my time here that I know I have the tools to be successful,” said Springsteen, whose tuition was covered through Bucky’s Tuition Promise. “If I can be half the teacher I’ve had in my departments here, I know I will be just fine.”

Berens, who graduated from UW–Madison in 2009 with a degree in journalism and geography, had promised graduates in a video in October that he would bring jerky and brandy for each of them.

“If you take a moment and look under your seats, you’ll realize . . . that I lied,” he said Sunday. “But it’s not because I didn’t want to. It’s because I’m cheap.”

(Each graduate who attended winter commencement did get a free copy of Berens’ New York Times best-selling book “The Midwest Survival Guide,” courtesy of the university.)

Berens turned serious later in his speech, sharing several stories about his struggles to find a satisfying career. He graduated with no job, and even less money, he said. He worked many jobs — bike mechanic, salesman, model for ShopKo, news reporter — before eventually hitting it big with “Manitowoc Minute.”

“Time will move fast,” he told graduates. “Your job isn’t to slow it down. Your job is to fill your days with what lights your soul. And don’t worry if you can’t see the path. Once your soul is lit, the path will reveal itself. And on your path — and this is most important — make sure you watch out for deer.”