After a successful mid-November launch, the GOES-R weather satellite, a joint project between NASA and the National Oceanic and Atmospheric Administration (NOAA), has reached its destination more than 22,000 miles from Earth. In approximately two months, it will be in lockstep rotation with the Earth and provide continuous weather coverage over the continental U.S. 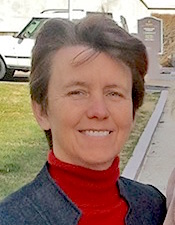 As researchers and engineers now work to get the system online and calibrated, schoolteachers from around the country are already taking their experiences from the launch back to the classroom through a multi-year program spearheaded by Margaret Mooney, director of education and public outreach at the UW–Madison Cooperative Institute for Meteorological Satellite Studies (CIMSS). That program culminated in a two-day workshop at the Nov. 19 launch.

To Mooney, the GOES-R project is an exceptional, grassroots way to reach students through their teachers and further engage them in science, technology, engineering and mathematics (STEM).

“Every aspect of STEM is represented in many ways,” says Mooney. “The science part is the biggest component and is well-represented through the design of the experiments and the data that will be used in atmospheric, meteorological, and climate sciences in teachers’ classrooms.”

The GOES-R Education Proving Ground, led by Mooney, began three years ago with six core educators, including 8th grade science teachers Brian Witthun and Craig Phillips of Jack Young Middle School in Baraboo, Wisconsin. They were among 23 educators from around the U.S. to participate in the CIMSS program and witness the launch at Cape Canaveral, Florida.

To Mooney, the GOES-R project is an exceptional, grassroots way to reach students through their teachers and further engage them in science, technology, engineering and math.

“As a teacher, I feel it is important for our students to see the connection between weather forecasts and how we are able to get that information using satellites,” says Phillips. “Our lessons focus on the science of satellites and how improved weather data makes for more accurate predictions and ultimately helps save lives.”

Prior to the GOES-R launch, Witthun and Phillips taught sections about satellite meteorology and how it relates to numerous other scientific fields in their classrooms. During the planning and construction phases of GOES-R, the middle school teachers collaborated with staff at CIMSS and the proving ground to create lesson plans and online tools for students to use for different units on weather, meteorology and satellites.

The online tools teach students about GOES-R and its ability to capture high resolution images, while other lessons focus on basic principles of satellite meteorology such as resolution and image coloring. Witthun and Phillips shared their four lesson plans with teacher colleagues at the launch workshop and discussed ways to teach students about satellites and the science behind atmospheric phenomena.