Watt to grads: ‘When you figure your dream out, remember it will not be a straight path’ 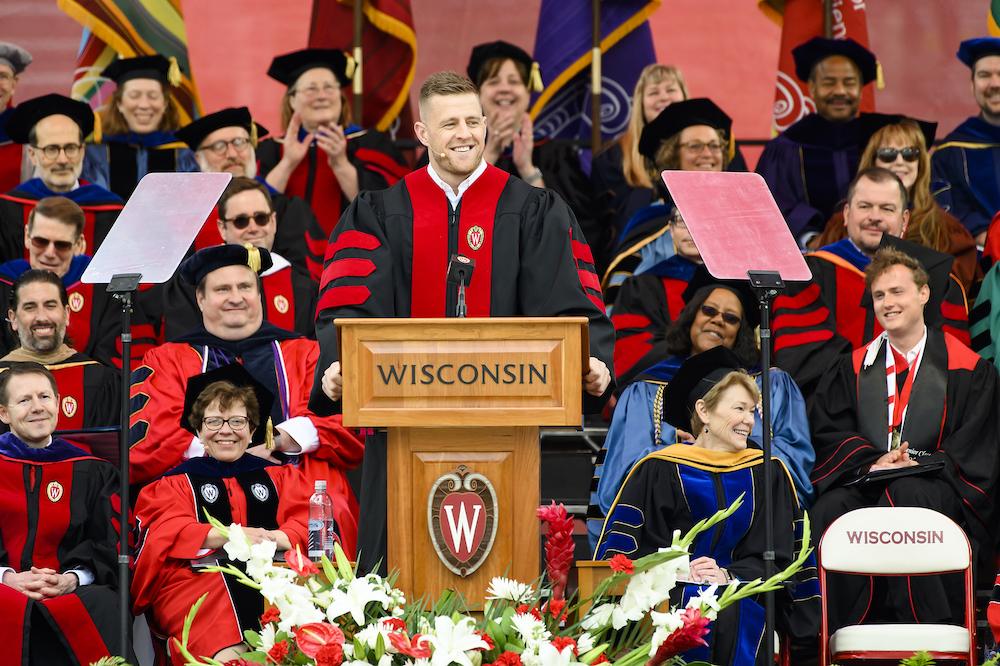 “You should have as big dreams as you want in this world,” speaker J.J. Watt, a Badger football standout who’s now a defensive end for the Houston Texans, told the graduates. “I once had a teacher tell me that my dream of being in the NFL was unrealistic. Well, hello.” Photo: Bryce Richter

In the days leading up to UW–Madison’s spring commencement, keynote speaker J.J. Watt had threatened to just wing it.

In the end, though, the NFL superstar did his homework like any good Badger.

“Calm down. I got it, all right?” he assured the crowd and a few nervous university officials. “Just because I didn’t write a speech down does not mean that I didn’t prepare.”

The teleprompter-free result was one of the more freewheeling — and perhaps memorable — commencement speeches in Badger history.

Saturday’s total crowd, including graduates, was estimated by university officials at 45,300.

The ceremony started with loud cheers as Watt (6 feet 5 inches) strode to the stage side by side with Chancellor Rebecca Blank (um, shorter).

Anna Falk, a kinesiology major from Berlin, Wisconsin, admitted she was not the day’s primary draw for some in her family. “My dad didn’t want to come until I told him J.J. Watt was speaking,” she said.

Watt, who spoke for just over 20 minutes, showed no one his speech ahead of time — not his manager, not the university, not even his girlfriend. “She asked to see it and I said no,” he told a cluster of fans just prior to the ceremony.

He drew from his life to share lessons. First, though, he name-checked Spotted Cow, praised cheese curds, and took the crowd on a tour of his long-ago Pewaukee bedroom.

“When you are born in the state of Wisconsin, your childhood closet consists of three things: green and gold; red and white; and camo. Maybe some blaze orange in 2019,” he said.

As a youth, Watt dreamed of being a Badger, he said. But the route was not easy. He earned minimum wage as a maintenance worker at Camp Randall and was a walk-on to the UW football team. His first life lesson: The path to your dreams often never goes the way you imagine it will.

Other lessons came as he endured football injuries and rallied the country to raise more than $41 million for Hurricane Harvey disaster relief.

“When you figure your dream out, remember it will not be a straight path,” he said. “Stay committed. Never lose sight of what it is you want to accomplish. Don’t be afraid to ask for help along the way, and don’t be afraid to help others along their path.”

And finally, “Try to change the world for the better as you go,” he said. 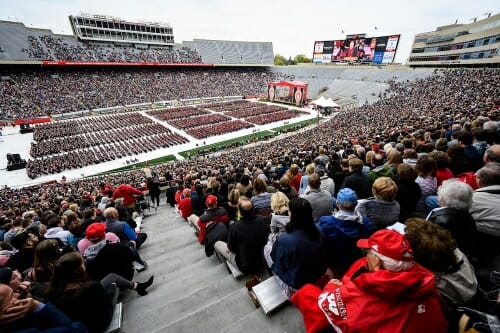 A crowd of 45,300 turned out for Saturday’s ceremony. Photo: Jeff Miller

The speech impressed Megan Gour, a master’s degree graduate in social work from Commerce, Michigan, who wore J.J. Watt socks under her gown. “It felt relevant,” she said, “He was engaging and hilarious.”

“A much better, more thought out speech than I expected,” said Kristi Parsons, a political science major from Racine, Wisconsin. “Very zany.”

The day wasn’t all about Watt, of course. There were degrees to confer and parents to make proud.

Ben and Betza Soofer of Los Angeles made sure their son, Sasha, saw them in the stands. They surprised him by waving three-foot-tall cardboard cutouts of his face.

“They’re a little much, aren’t they?” said a laughing Sasha, who earned an economics degree. “My parents aren’t from this country. I’m the first generation born in America, so this is a big deal for them.” 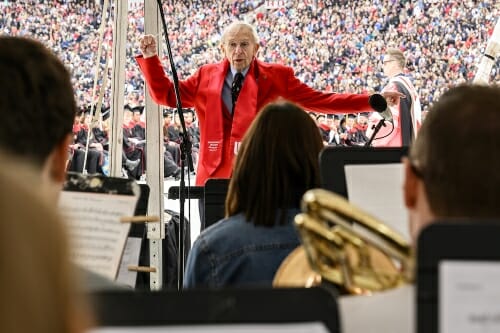 Mike Leckrone conducts the UW band for the last time at commencement – he is stepping down after 50 years as director. Photo: Bryce Richter

Fans said farewell to Mike Leckrone, retiring after leading the UW marching band for 50 years. And the ceremony doubled as a stadium-sized shout-out to generations of extraordinary UW women. The university is celebrating the 150th anniversary of women earning bachelor’s degrees, a theme woven throughout the ceremony.

Watching the video in cap and gown was Lisa Hecht, 62, something of a trailblazer herself. As a freshman at UW–Madison decades ago, she remembers being one of only a handful of women in an engineering class of hundreds.

In 1979, she earned a bachelor’s degree in electrical and computer engineering but didn’t take part in commencement. She was too focused on her three final exams the day before, she says. The missed opportunity always saddened her, so she drove 1,651 miles from Boise, Idaho, to take part Saturday, 40 years later.

“I wanted to close that circle and finally celebrate my accomplishment,” said Hecht, a retired program manager for Hewlett-Packard. 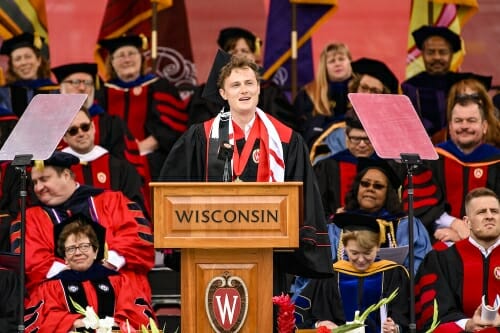 Student speaker Ron Steinhoff, senior class president, spoke of both the highs and lows of his college experience, from being a nominee for a Rhodes Scholar to feeling broken when life didn’t match the expectations he’d set for himself. He sought mental health counseling for anxiety, he said, and found the strength to be himself.

“Put the mask down,” he told his fellow graduates. “In a world inundated with social media posts where we can always paint our lives to look perfect, I encourage you to be different. To be honest in what you struggle with. To make the decision, each day, to take the fake smile off and be who you really are.”

Mira McCoy of Madison, who earned a double major in environmental studies and community and environmental sociology, wrestled with mixed emotions throughout the day. She’s always been someone who really loves school, she said. Now, the unknown awaits.

“It feels like big, open space,” she said. “That’s both terrifying and exciting.”