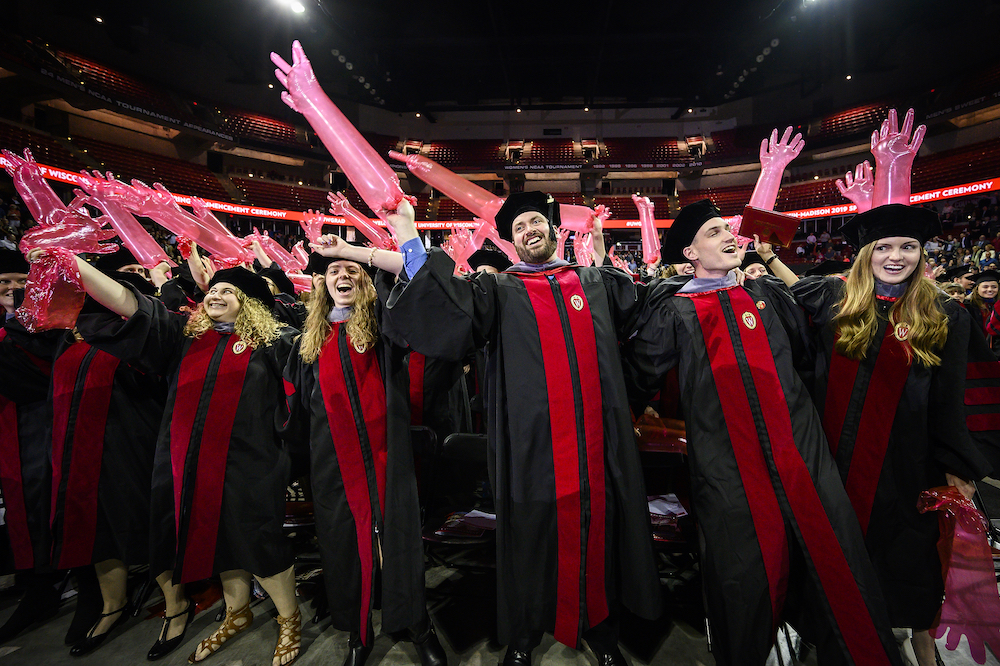 Graduates from the School of Veterinary Medicine put a new spin on the traditional singing of “Varsity” at the end of Friday’s ceremony by using inflated medical gloves. Photo: Jeff Miller

More than 900 University of Wisconsin–Madison graduate and professional students capped years of hard work Friday, collecting their degrees while friends and family filled the commencement ceremony and the Kohl Center with cheers and applause.

For Jeanette Metzger, it was an opportunity to share in her accomplishment — a doctoral degree in cellular and molecular pathology.

“My family was here when I defended my dissertation, and now they’re here with me for graduation,” said Metzger, lingering in the sun outside the Kohl Center before the ceremony with her advisor, medical physics professor Marina Emborg, while fellow grads posed for photos. “It’s exciting to have all the fun people who’ve supported you here to see what you’ve been doing, what you’ve been part of.”

Metzger came to Madison from Topeka, Kansas, thinking UW–Madison would be a good place for undergraduate preparation for medical school. Two degrees later, she is preparing to start a postdoctoral fellowship on campus, working with Emborg and biomedical engineering professor Shaoqin “Sarah” Gong on nanoparticles capable of editing genes inside living cells.

“I moved in, and I couldn’t leave,” Metzger said. “I love Madison.”

During the ceremony, Chancellor Rebecca Blank pointed out Metzger’s research – mapping the areas of the heart where the earliest changes associated with Parkinson’s disease can be found – as just one piece of extraordinary work by this year’s graduates.

By now, Blank said, grad students understand moments of discovery like Metzger’s are accompanied by plenty more moments of exhaustion and frustration. She encouraged them to look at those less-celebratory times as opportunities to step back and take a wider view of the world.

“When Albert Einstein came upon a problem that stumped him, he’d walk away and play his violin. Isaac Newton and Carl Sagan would pick up their pens and write. Beatrix Potter created Peter Rabbit as an outlet for the frustrations she encountered as a botanist,” Blank said. “Put yourself in places where you can learn new things from people with lots of different interests.”

Miller, a Milwaukee native, was a UW–Madison student in the early 1960s before leaving shy of a degree to play guitar in Chicago alongside blues legends like Muddy Waters and Howlin’ Wolf. As leader of the Steve Miller Band, his songs “Fly Like an Eagle,” “The Joker,” and “Swingtown” — a staple at Badger sports games — are among the most recognizable in American popular music. 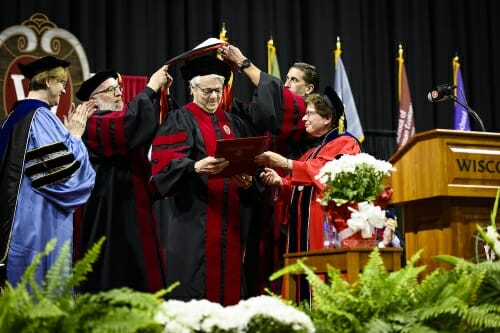 He told graduates his time in Madison calibrated a moral compass that served him well “outside the loving arms of the university.”

“It was here that I was introduced to the civil rights movement, to the idea of social justice,” Miller said. “The culture here at the university imprinted that on me.”

The culture of the university gave emeritus bacteriology professor Tom Brock the leeway to complete his work on bacteria that lived in the extreme conditions of hot pools and geysers of Yellowstone National Park.

“Some people called it “useless” because it was not focused on practical ends,” Brock said. “But sometimes a basic discovery can lead to very wide applications.”

Brock’s work revealed the bacteria’s heat-resistant DNA replication machinery, an enzyme that has since made modern DNA research possible.

View more photos from the ceremony

Cora Marrett, a UW–Madison alumna and longtime sociology professor and former deputy director of the National Science Foundation, spoke on her mixed feelings about her reputation as a trailblazer to highlight the 150th anniversary of the first UW–Madison degree earned by a woman. It doesn’t feel as good to be a trailblazer, she said, when it means so few women had the opportunity to go before her.

“But if trailblazing signals efforts to widen pathways — and diversify path-takers — then I embrace the moniker,” said Marrett.

Trailblazers rarely set out to take on the role. It’s discontent with the way of the world that turns them toward change. Marrett told graduates she thinks of that kind of productive discontent when she pictures the original six women receiving the first diplomas from UW–Madison.

“Can we not draw inspiration form their pioneering spirit?” she asked. “You are the path-makers. They would be proud to see that you continue to strive.”

Mike Leckrone, the marching band director who will retire this year after five decades at UW–Madison, drew long applause and thanks from Blank while conducting the band during one of his last official campus events. Blank extended a special thanks, too, to Provost Sarah Mangelsdorf, who was celebrating her final commencement before moving on to become president of the University of Rochester.

She saved her last thank-you for the departing graduates.

“Thank you for being part of this community. Best wishes as you set off on the next stage of your journey,” Blank said. “Wherever you go, be sure to come back and visit us every so often here in Madison and tell us how you’re doing.”