UW-Madison this week is holding VoteFest, a series of events to encourage students to vote and show them how.

VoteFest, from Oct. 22-27, aims to empower students to become more civically educated in hopes that they carry that habit with them after they graduate.

“College students have a lot of power. The things they care about should be voiced and represented by elected officials,” said Megan Miller, assistant director of civic engagement and communications at the Morgridge Center for Public Service. “A lot of people who vote in college continue to vote for their whole lives.”

Students will be able to partake in a variety of VoteFest events, including an art exhibit, a documentary and a Bucky Badger appearance. 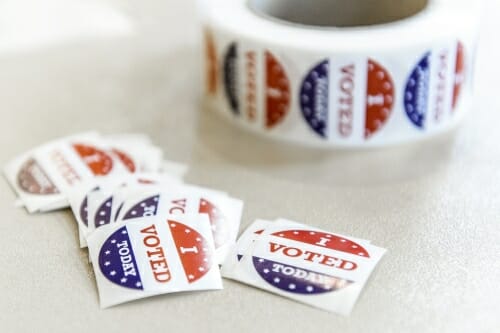 On April 3, 2018, “I Voted Today” stickers sit waiting for voters in the Wisconsin Spring Election polling location in Tripp Commons inside the Memorial Union at the University of Wisconsin–Madison, one of several official polling places for UW–Madison students living on campus. (Photo by Bryce Richter / UW–Madison) Photo: Bryce Richter

Also, on weekdays from Oct. 22 to Nov. 2, Madison residents will be able to early vote at the Student Activity Center from 10 a.m. to 3:30 p.m., Union South from noon-6 p.m., and Memorial Union from noon-6 p.m. All early voting locations will be open to voters from all wards.

The Big Ten Voting Challenge Advisory Group hopes that VoteFest will help students and citizens of Madison realize that early voting is an option. For those whose work schedules interfere with voting, early voting can make participating in elections easier by giving students more control over when they vote.

While voting on election day only allows thirteen hours to get to the polls, early voting allows citizens two extra weeks to turn in their ballots. With three locations on campus, no line, two full weeks of options, “there’s no excuse not to go,” according to Anna Barry, the Big Ten Voting Challenge Intern.

Students should be sure to make sure they have proper ID to vote. For more information on early voting, registration and preparing for the Nov. 6 Election, visit vote.wisc.edu.