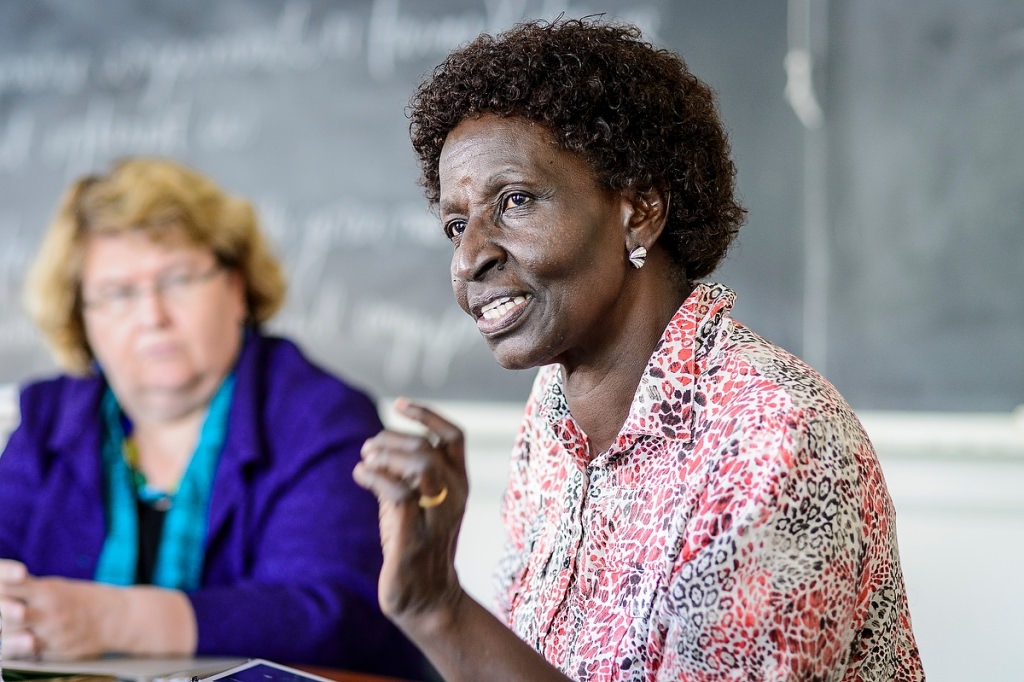 When a war ends in Africa and leaders finally gather at the peace table, half of humanity is typically missing: women. It’s bad enough that girls and women are often targeted when armed marauders, militias and government-sanctioned predators run amok. It’s worse, say a growing group of women who identify themselves as peacemakers, that women are often ignored when peace is made.

Too often, continuing violence can hamper or destroy efforts to rebuild society.

Now, the University of Wisconsin–Madison is hosting a project designed to explore women’s existing roles in African peacemaking and to see what lessons can be gleaned from their mostly informal initiatives. In September, members of the steering committee for the Women and Peacebuilding in Africa project described their perspective on the reality behind the headlines about the many conflicts that have beset Africa in recent decades.

Women are often at the front line of attack, said Ayesha Imam, a Nigerian researcher, women’s rights activist and consultant living in Senegal. “In Algeria, where conflict with extremists started in 1991, for 10 years or more, women were very much the targets of extremist attack. We’ve seen this again in Nigeria, where Boko Haram kidnaps schoolgirls, and in Afghanistan and Pakistan, where girls’ education gets targeted.”

But women are also at the forefront of local and national initiatives to bring about peace and confront extremism. This is the central concern of the research project.

Women may envision peace more broadly than men, Imam says. “We are increasingly defining peace not as the mere absence of physical conflict, but as conditions that enable us to live decent lives, allow children to go to school, and, during peacetime, not to be beaten in domestic violence.”

Funded by a collaborative research grant of $961,600 from the Carnegie Corporation of New York and the Norwegian Ministry of Foreign Affairs, the women and peacebuilding project is being administered by UW–Madison’s Center for Research on Gender and Women, under the direction of Aili Tripp, a professor of political science and gender and women’s studies.

In July, the two-year project began to look at the cost of women’s exclusion and the possibilities for their inclusion in peace talks, peacebuilding, and political institutions in countries affected by war in Africa, including regions with predominantly Muslim populations. 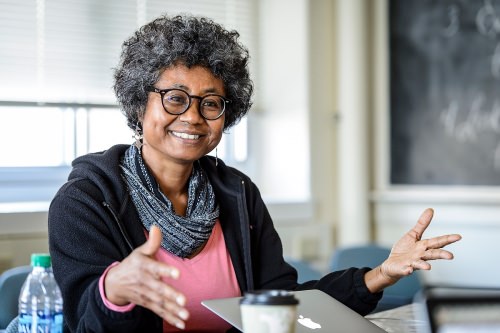 Ayesha Imam, a Nigerian researcher, speaks at Sterling Hall on Sept. 14. Members of the steering committee for the Women and Peacebuilding in Africa project described their perspective on the reality behind the headlines about the many conflicts that have beset Africa in recent decades. Photo: Bryce Richter

The researchers include scholars and women’s rights activists from Nigeria, Somalia, Sudan, Uganda, Norway, and the United States, who are working in Somalia, Algeria, Nigeria, South Sudan and Sudan.

Peace, Imam says, “is a situation in which we can live with each other. And to do this, we need a structure that does not marginalize, discriminate, or leave one group out, while another group reaps all the benefits.”

In northern Nigeria, riven by extremism and Christian-Muslim tensions, Fatima Akilu started a rehabilitation program for extremists who have left the battle. “People said, ‘Just kill them all off,’ but if you kill me, my relatives will kill you,” Imam said. “Fatima Akilu is working on how people think and the issues that push or pull people into extremist ideology. In Nigeria, we need to talk about a different kind of religious identity, one that is inclusive.”

Since the 1990s, women have played an increasing role as governments pick up the pieces after war and political violence, Tripp says. “Countries that have come out of conflict in Africa and globally on average have twice as many women in parliament, and it’s no accident that Ellen Johnson Sirleaf became the first elected female president in Africa just after the war in Liberia came to an end. After a major conflict, there are twice as many constitutional and legal provisions relating to women’s rights.”

Women apply their gifts to healing the sorrows of war, says Ruth Ojiambo Ochieng, former executive director of the Isis-Women’s International Cross-Cultural Exchange in Uganda. (Isis is a common name for a women’s organization, based on the Egyptian goddess of creativity, knowledge and wisdom). Refugees from South Sudan who fled to Uganda by the thousands include children who have lost their parents. “Women have taken these children into their families, made them part of their households,” she says. At refugee camps, “women will tell you, ‘The parents are gone, these are our children.’

“Too often, post-conflict reconstruction programs shy away from healing the mind,” says Ochieng. “We have found in all countries that neither government nor the international community puts money into healing people who have gone through these traumatic experiences. But you are setting up another cycle of conflict because the pain never leaves, and the urge for revenge remains.”

Peace is much more than the absence of war, says Ochieng. “A woman asked me, ‘Am I going to be able to eat peace?’ No, you can’t, I said. For me, peace is what will make my life whole. It’s when I stop hurting, when we can go out to fetch water and not get raped or beaten up. Peace is when my child can go to school, when I can put food on my table; it’s about the well-being of humanity.”