Virtual reality makes its best users the most queasy

In a twist of virtual fate, people with the best 3-D vision are also the people most likely to suffer from motion sickness while using virtual reality displays.

Researchers at the University of Wisconsin–Madison demonstrated this irony by playing motion-heavy videos for study participants through the Oculus Rift — a 3-D virtual reality headset worn like a pair of goggles.

Nearly two-thirds of the study subjects quit watching the videos early, overcome by nausea in the virtual environment for much the same reason discomfort catches up to people in real-world situations.

Motion sickness is the product of mismatched sensory information. 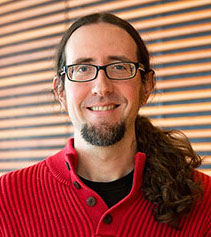 “The classic example is reading in a car,” says Shawn Green, UW–Madison psychology professor. “Lots of people can’t read in a car because if you have a newspaper in front of you, your visual system says you’re still.”

But you’re not still. While the newspaper may not be moving, the car speeds up and slows down, turns corners and climbs hills. All this movement registers in the vestibular system, a series of organs in the ear that aid balance by telling us which way is up.

“In the car, those balance cues say you’re accelerating, and that’s a big mismatch with your eyes on the still newspaper,” Green says. “That mismatch makes you nauseous.” 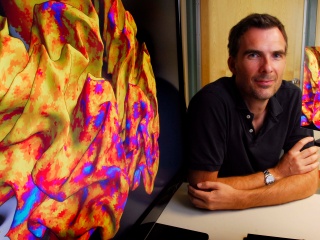 Oculus produces that mismatch in reverse, according to Bas Rokers, UW–Madison psychology professor and a co-author on the study published in the journal Entertainment Computing with Green, graduate student Brian Allen and recent graduate Taylor Hanley. While the 3-D movies depicted flying over forests and under bridges, the headset and the viewer aren’t actually moving.

“And observers don’t have agency — they can’t control the motion,” Rokers says. “If they were in control, they could predict what things should look like. That would probably help them ease the discomfort.”

But why is it only some users get too sick to stick with the Oculus Rift? Rokers and Green found that the people in their study who reported the most discomfort were also best at judging the direction of objects moving toward or away from them.

“It seemed natural that people who may be very sensitive to 3-D motion might pick up on the fact that the visual motion signals provided in the Oculus can be inconsistent with balance signals,” Rokers says.

Interestingly, it was just perception of moving objects that predicted motion sickness. Skill in identifying the relative depth of still objects was not connected with the 3-D discomfort. And, in fact, results of the two tests seem independent.

Short of decreasing the difference between Oculus’ presentation of reality and reality itself — likely already a goal of the system’s developers — the researchers say users could benefit from a break-in period that slowly introduces the sort of mismatched cues that cause motion sickness. Like sailors finding their sea legs, people tend to work their way past the causes of motion sickness.

“On a boat, maybe you stare at the horizon for a while and get those cues synced up,” Green says. “It’s probably contextual. Your body learns that in this situation, cues often mismatch. So, you just learn to ignore the mismatch.”

Makers of virtual reality equipment may be able to use the researchers’ results to guide their own work.

“Now you can identify those people that are most likely to suffer from motion sickness,” Rokers says. “And you can test your product directly on those individuals, and ensure a much larger market for your product.”

The research was supported by a UW–Madison Hilldale Fellowship for undergraduate researchers awarded to Hanley, who ran the study.