Thousands of daily cases. Hundreds of thousands of deaths. Hundreds of millions of vaccine doses. As the tallies of COVID-19’s effects in the United States have mounted to a dizzying scale, a team of University of Wisconsin–Madison scientists has kept its focus on the tiniest shifts in the virus’s genetic material.

Beginning with the first known case of the virus in Wisconsin in February 2020, researchers at UW–Madison’s AIDS Vaccine Research Laboratory have been sequencing the genomes of as many virus samples as they can process, reading each letter of the viruses’ genetic codes. The researchers have been adding to a family tree of infections globally to help fight the disease on intercontinental, interpersonal and intercellular scales.

A bill introduced last week by Wisconsin Sen. Tammy Baldwin would fund an expansion of virus genome sequencing across the U.S. Sequencing tries to keep tabs on the virus that causes COVID-19 as it shifts and evolves, sometimes into more contagious variants. As the virus’ genetic material is replicated in people it has infected, random mistakes are carried forward. The more people the virus infects, the more likely mistakes are to happen.

“The current estimate is that it makes one of those mistakes — a mutation — for about every two new people infected,” says Thomas Friedrich, professor in the UW School of Veterinary Medicine. “Over time, as different viruses take different paths to infect more people, they accumulate different combinations of mutations. We can use those like fingerprints to track how different lineages of the virus spread through space and time.”

Drawing samples from patients in the UW–Madison-partnered UW Health system and from positive tests in nearby Milwaukee County, labs run by Friedrich and UW School of Medicine and Public Health Professor David O’Connor have sequenced virus from more than 3,200 infections. Their most pressing concern is surveillance, keeping watch for the arrival of virus variants believed to be more adept at infecting people or possibly carrying mutations that make vaccines and common treatments less effective. Together at the AIDS Vaccine Research Laboratory, they have posted surveillance results online as soon as sequences are complete. 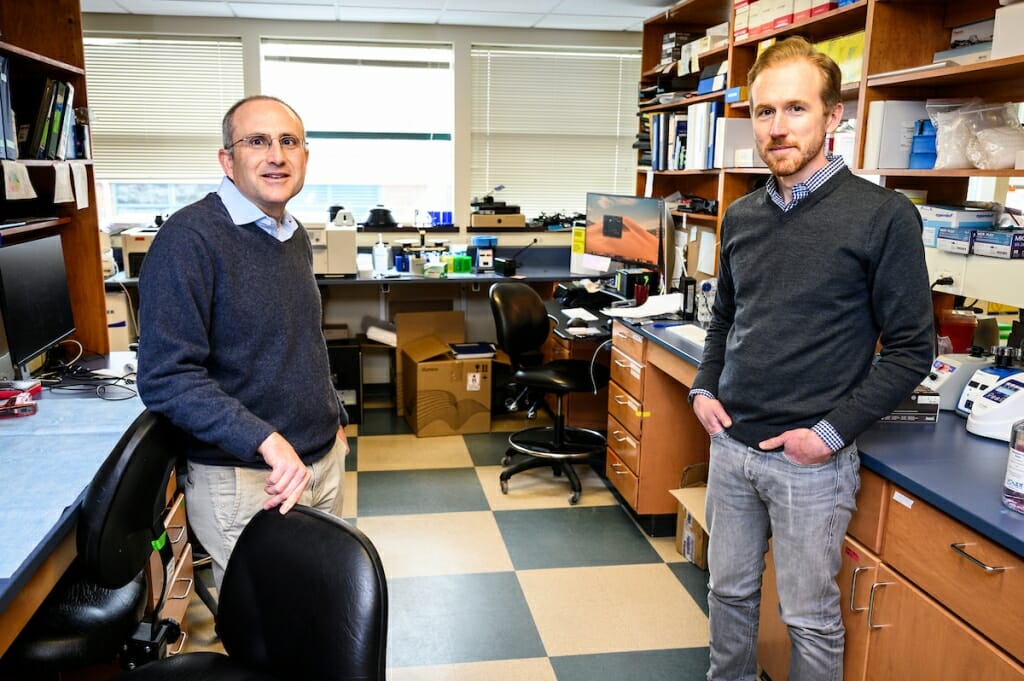 Researchers David O’Connor, left, and Thomas Friedrich are pictured in a lab at UW–Madison on March 18, 2020. Photo: Jeff Miller

“In Madison and Dane County, where we’ve sequenced about 5 percent of the positive test cases throughout the epidemic, we can have a fair degree of confidence that if there was a significant number of the variants that first caused concern in the United Kingdom or in South Africa, we would have seen it by now,” O’Connor says. “And the fact that we haven’t means that if these viruses are here, they’re here in low enough levels that we don’t have to worry too much — yet.”

The Madison area’s 5 percent sequencing coverage stands out thanks to the decades of experience Friedrich and O’Connor have built trying to stay ahead of global HIV, influenza and Zika virus pandemics. Nationally, fewer than 0.5 percent of all viruses have been sequenced.

The UW–Madison researchers have funding for their work from the Centers for Disease Control and Prevention’s SPHERES program (Sequencing for Public Health Emergency Response, Epidemiology, and Surveillance), from Fast Grants (a group of nonprofits and private donors) and from the Wisconsin Partnership Program, because they were ready to leap in when the pandemic arrived. While they focus on sequences from Dane County, and work hand-in-hand with collaborators in Milwaukee to study the viruses circulating there, colleagues at Gundersen Health System in Western Wisconsin and the Wisconsin State Laboratory of Hygiene are sequencing viruses from elsewhere in the state.

“There are places in the country for which there’s almost no sequence data available, because there isn’t somebody there who either has the experience to do it or the ability to navigate the very complicated regulatory issues that are necessary to set up a program in the first place,” Friedrich says. “In the UK, where they found one of these variants of concern, they were sequencing 10 percent of cases. They have lots of the leading scientists and a national health system, and there’s already an infrastructure onto which you could build a coordinated national effort. Here, the effort was much more patchy and piecemeal.” 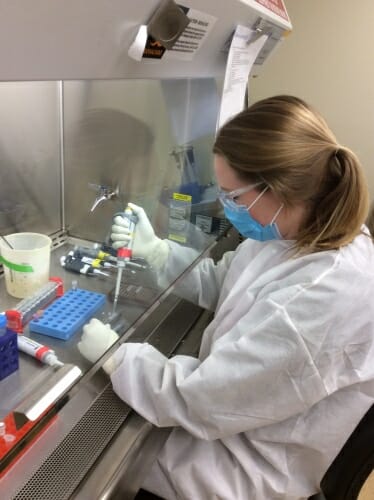 UW–Madison graduate student Katarina Braun processes samples from COVID-19 patients while sequencing the genome of more than 200 variations on the SARS-CoV2 virus which infected people in Dane and Milwaukee counties in early 2020. Courtesy of Gage Moreno

The new Senate bill provides funding for the CDC to organize the sequencing of virus from 15 percent of COVID-19 infections across the U.S. Without more of this kind of surveillance, much of the country will remain blind to changes in the types of virus circulating in their communities. Even if public health agencies manage to tamp down COVID-19 spread locally, they can’t stay disconnected from virus mutations rising in neighboring towns or far-flung countries.

“Those raging epidemics elsewhere are going to potentially generate the viruses that could make vaccines less protective, make disease worse, and then be imported into the U.S.,” O’Connor says. “That could unwind whatever hard-fought gains we’re able to accomplish.”

Sequencing can also describe patterns of infection in communities trying to make important decisions about where to steer public health orders and to whom the earliest vials of vaccine are delivered.

In November, O’Connor and Friedrich and collaborators published research that used their tree of virus sequences to show that Madison and Milwaukee, while just 75 miles apart, were originally affected by very different variants of the virus. The results demonstrated the effectiveness of stay-at-home orders and limits on public gatherings, and suggested that demographic and socioeconomic differences like income, health care access, and prevalence of diabetes and obesity likely played major roles in the much higher rates of infection and death observed in Milwaukee.

They’re also applying the sequencing data to show where the highest risks lie for health care providers — not necessarily in their interactions with infected patients.

Once established, a coordinated sequencing system in the U.S. could help end this pandemic and the next.

“You will see a benefit for HIV, for influenza, for whatever comes along,” O’Connor says. “You know you want to be able to track how each of those viruses is circulating, which viruses are circulating, because it will save lives. They are changing constantly, and we will need to keep pace any way we can.”