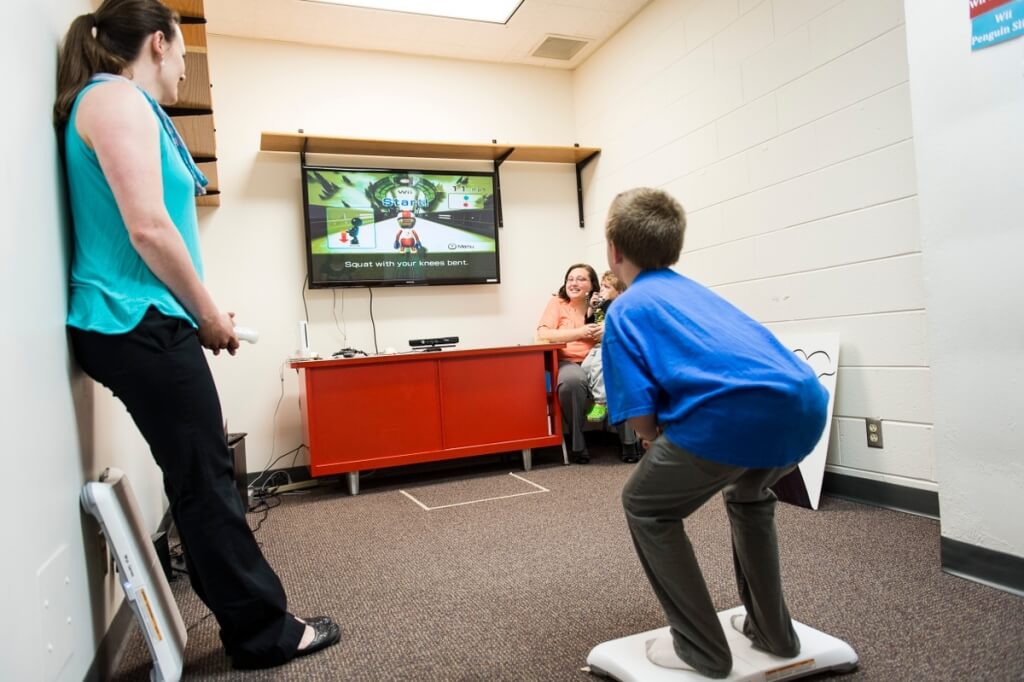 Xavier Hansen stands on a Wii Connect balance board and practices a Wii ski jump pose while mirroring his body position to match that of a video-game shape displayed on a computer monitor. Sitting in the background at right is Xavier’s mother, Gail Hansen. Photo: Jeff Miller

At the age of 9, Xavier Hansen already has it figured out. Someday, he is going to be the boss.

“He has great aspirations to make things,” says his mom, Gail. “His goals are to own a movie theater. He wants to be in charge. If he wants something, he’ll find a way to get it.”

Xavier has big brown eyes and freckles to match. He likes Pokémon and Nintendo and giving enthusiastic high-fives. He is a take-charge kid with sandy blonde hair and boundless energy. Xavier is also on the autism spectrum, diagnosed when he was 3½.

Today, Xavier and Gail are at the Waisman Center at the University of Wisconsin–Madison, where Brittany Travers, professor in the occupational therapy program in the Department of Kinesiology, is studying kids with autism spectrum disorder (ASD) to learn more about how helping kids improve their motor skills may have a positive impact on their symptoms.

Travers has a lot of big questions about autism, and many of them have to do with the brain.

Xavier participated in one of Travers’ studies in 2015 and he was at the Waisman Center on this day to demonstrate what that entailed. As it turns out, it meant lots and lots of video games.

Odd as it sounds, Travers first became interested in autism because of a “bizarre family history” with Alzheimer’s disease.

“Every female on my mom’s side of the family has Alzheimer’s as far back as we can remember,” Travers says. “It made me fascinated with the brain and with what’s happening. I used to think that we are our memories and when that’s gone, what’s left?”

She also had a family friend with ASD who challenged her notions about the brain, learning and memory, and piqued her curiosity. 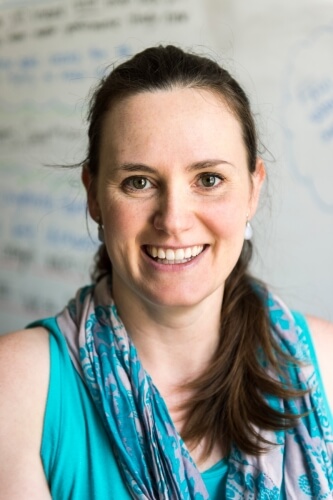 “I was so fascinated with his skills. I would often think: ‘I couldn’t do that!’, yet at the same time, people considered him profoundly impaired,” Travers says.

Her interests in learning and memory intertwined with a desire to better understand the brain with ASD, and she committed herself to it as a graduate student in psychology at the University of Alabama.

It was on her second day of school, during an autism assessment, when something struck her. She began to notice slight differences in the way people with ASD moved compared to those not on the spectrum, slight “atypicalities,” as she describes it. Soon, she began to notice it everywhere she went.

“After seeing this over and over again, my attention was drawn to it,” Travers says. “I went back to studying basic learning mechanisms in autism but I also started studying specific motor learning.”

In her lab at the Waisman Center, where she is a young, up-and-coming scientist,  Travers set Xavier in front of a giant television screen and a white Wii balance board. The Wii is a video game system from Nintendo, but as a student, Travers learned she could use it to capture motor and postural data for her research.

She turned on the system and a rudimentary game appeared, with cartoonish icons for various postures one might see in yoga or martial arts. A Boise State University collaborator, who was once at the University of Wisconsin–Stevens Point, helped her develop the prototype game.

Gentle and friendly, Travers asked Xavier which pose he wanted to do first.

“Energy ball!” Xavier exclaimed, assuming the position on the balance board, squatting, with his arms arranged across his body as if he was holding a special ball.

A silhouette of his body appeared on the screen in the game, which also showed the outline of the proper position. Dots on the screen turned from red to yellow when his silhouette matched the displayed pose. These dots align to 16 points on the body and data is collected from them every 50 milliseconds.

Xavier held the pose briefly, let out an emphatic sigh, and came off of the board. He got back on and held the pose, with minimal error, for one minute. 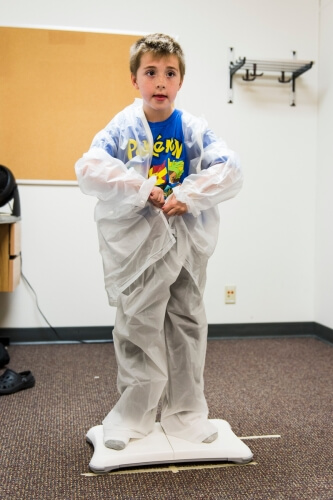 Xavier practices getting dressed in a translucent rain suit as sensors from the video-game system monitor his joint movements. Photo: Jeff Miller

In between poses, Xavier got to pick real Wii games to play. On this day, he chose Penguin Slide and Ski Jump. Unbeknownst to him, these fun games are also helping him improve his balance and stability, since they rely on precise body movements to succeed.

Travers likes to give the kids in her studies a break from the hard work, and she and her research assistants — including undergraduate and graduate students in the department — try to make the experience fun. Throughout the course of the study, kids like Xavier get to choose a Velcro ninja character to move up a mountain as they improve their ability to hold poses longer.

Last spring, Xavier and Gail traveled to the Waisman Center three days a week for six weeks so Xavier could train on the balance board for an hour at a time. Travers started with Xavier, like her other study subjects, by measuring his IQ, and assessing his autism symptoms such as engaging in repetitive behaviors and social communication skills. She also tested his ability to dress and undress himself in a clear poncho while the Wii measured his balance and stability.

At the completion of the study, she repeated the assessments to measure change. In other study subjects, Travers also took brain scans before and after the balance training, to see if she could also detect structural changes taking place in the brain. The results should publish later this year, but a study Travers published last year suggests she may find something interesting.

As a graduate student, Travers used her Wii balance board (which had been a Christmas gift) to show that people with more unstable postures had more severe autism symptoms.

“Just the amount of waver that was happening when they were standing on the board, trying to be as still as possible, was highly predictive of their core symptoms in autism,” Travers says. ”The fact that people with autism do have these underlying motor difficulties is something a lot of parents talk about. Their kid can’t participate on the playground, even if they wanted to socially engage; they can’t do the monkey bars.”

It was something the scientific community had debated and opinions were split. Some experts believed motor impairments in people with ASD led to the social impairments often associated with the disorder. Others believed it was the other way around.

“I was dissatisfied with both of those answers,” Travers said. “I thought: ‘Maybe something else is causing both of those.’ I had done some neuroimaging work as a postdoc and I said: ‘Let’s look at the brain!’” 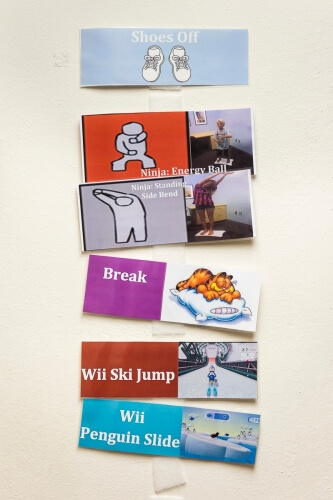 Visual cards depict the order of movements that children practice as they participate in the balance study. Photo: Jeff Miller

And she did, publishing her findings last year in the Journal of Autism and Developmental Disorders. Her research team found that among people with autism, those with weaker grip strength also had more severe autism symptoms, and both of these were related to changes in the structure of the white matter — a type of brain tissue — in a particular region of the brainstem.

The brainstem contains nerves that control motor function and the sensory system, and also helps regulate heart rate, breathing, sleeping and eating. Travers found that changes in this particular region of the brainstem predicted both motor ability and autism symptom severity, suggesting that both are affected by some upstream pathway but not by one another.

Travers then wanted to know if bolstering motor skills in people with autism reduces the severity of their symptoms by changing the brain.

“In the literature for typically developing people, balance training is a key way that’s been shown to change this particular brain area,” she says. “We don’t know if it will work in people with autism.”

Her results should soon start filling in the answers, and will undoubtedly bring more questions.

“From our model, if symptom severity is downstream from this brain region, theoretically, it would follow that we could change it,” Travers says.

Regardless of what her study shows in the brain, Travers remains hopeful about her work.

“It helped with his balance,” she says. “I noticed it once it got better. We’re trying to find a Wii balance board for him at home.”

This is critical to Travers, because studies like hers can take years, even decades, to produce valid and meaningful results.

“I’m trying to find out what’s happening in the brain in autism and that’s really complicated,” she says. “It takes years to get all the brain scans processed and get quality control checks on the data. Kids who were 5 years of age are now 10. Are there things we can do to help them in their daily lives now?”

For the latest on autism advances, a presentation from an expert panel and more, attend the live or webcast Waisman Center Day with the Experts: Autism on Saturday, Jan. 23, 2016 at the Friends of the Waisman Center Auditorium. Learn more and register online.

Disclaimer: While the research is promising, no video game treatment or training has been rigorously shown to improve autism symptoms.

For more about balance training, video games and autism, see a Q&A with Brittany Travers on the UWMadScience blog.