Although Logan Voigts hadn’t been to this dairy farm before, he was pretty sure he’d find problems with the calves.

Sure enough, when he got to the first pen, he saw listless calves with runny eyes and runny noses—clear indications of respiratory problems. But spotting the issue was the easy part. Now he had less than two hours to scope out the cause and start devising a plan to solve it.

Voigts and three fellow University of Wisconsin–Madison dairy science majors were at the 2,500-cow California farm in April to participate in the 2018 North American Intercollegiate Dairy Challenge. While he was looking at the calves, teammates Tony Schmitz, Connor Willems and Charlie Hamilton were looking at the farm’s protocols for milking, feeding and other key functions. 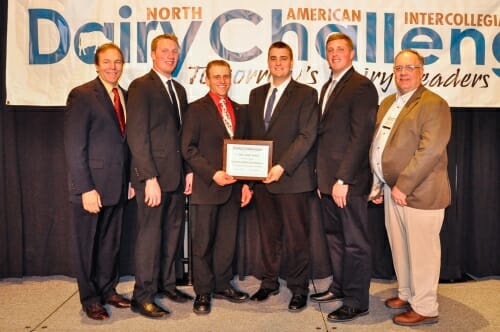 All around them, students from other U.S. and Canadian schools were doing the same thing: assessing the operation and coming up with ideas for improving it, which they would present to a panel of dairy experts. The winning plan had to be data-driven, cost-effective, and practical to implement on this farm.

The winning plan was the one crafted by the UW–Madison team.

It’s no small deal to represent one of the world’s top dairy science programs at a national dairy competition, but the Badger team was well prepared. They’d done practice runs on dozens of farms with seasoned coaching from UW–Madison dairy science professor Dave Combs, dairy science faculty associate Ted Halbach, and UW alumni who are now professional dairy consultants. They’d also honed the presentation skills that would help them sell their ideas to the judges.

As they prepared for the contest, the teammates were also practicing skills they’d soon be using on a professional basis. All four graduated in May and now have jobs that involve troubleshooting dairy operations.

“Dairy challenge requires a unique skill set,” says Halbach. “You need an understanding of dairy management topics. You can’t shortchange that. If you’re looking at stalls or milk parlor function, you need a comprehensive knowledge of standard procedures, what are the relevant benchmarks, and what are the practical alternatives that you can recommend.

“You also need analytical skills to be able to take what’s observed and create an action plan out of that,” he adds. “And finally, you need to be able to present it. You get exposed pretty quickly if you’re missing any of those three.”

The situation with the sick calves is a good example of how the team put these skills into play.

The night before the farm visit they reviewed data about the farm’s milk production, feeds, herd health, reproduction and finances. One thing they noticed was that the number of calves being treated for pneumonia was above the norm. They also noted that the first-lactation heifers were turning in sub-par milk production—a sign that they might be suffering residual effects of the disease. So Voigts, who was assigned to inspect the calf setup, had a pretty good idea what to look for.

“When I got to the weaned calves I looked at the eyes and ears for signs of respiratory illness,” he recalls. “I saw the symptoms, so I began look for causes, and my first question was ‘Is this a moist environment?’”

The answer was “yes.” The rice hulls used as bedding in the calf facility were damp near the surface. Voigts took a long look at the facility and concluded that its east-to-west orientation didn’t allow in enough sun to fully dry out the bedding.

“It wasn’t feasible to reorient the calf barn, so we had to look for other solutions. What we came to was being more aggressive on managing the bedding,” he says.

Back in their hotel room, the team looked up the price of rice hulls and the farm’s labor costs to estimate the cost of spreading additional bedding. Then they estimated what the sick calves were costing the farm—both the drug costs and the value of the milk that would be gained in first lactation if the heifers avoided respiratory illness. More fresh bedding seemed like a no-brainer. And apparently the judges agreed.

Voigts, who now works at ST Genetics, says that the experience he gained preparing for dairy challenge events made him better at advising farmers on reproductive strategies. His former teammates echo that.

“After visiting so many operations, I walk onto a farm having those experiences in the back of my head,” says Willems, now a feed consultant for Cargill Animal Nutrition. “It is amazing how I see (an issue) and pull back something we saw on a practice farm or a competition, and then think about how we went about creating a solution and whether that would work for this dairy.”

Tony Schmitz, who is now a dairy nutrition specialist with Kerry, Inc., says that participating in dairy challenge taught him to zero in on large bottleneck issues and to prioritize those issues based on the potential for financial gain or overall improvement of the dairy. “I have learned a great deal by just trusting what the cows and the employees are showing you and then going back to see how the in-person analysis matches with the farm’s records and data,” he says.

Charlie Hamilton is in a slightly different situation, because the farm he’s analyzing is his own. He and his parents operate a 65-cow registered Holstein operation in Lafayette County, Wisconsin.

“Obviously it is a little different on my own farm, because I have more skin in the game, but I try to look at things through the same lens,” he says. “On any farm it’s easy to be blind to what’s around you. By having a consultant or approaching it like a consultant like we did in the dairy challenge, we have a fresh perspective. I try to look at things as if I’m not involved to see how I could make things better.”