Jordan Madden already has an impressive resume of public service.

And now the University of Wisconsin–Madison senior will be able to build upon his mission of helping others as the recipient of a 2018 Truman Scholarship. 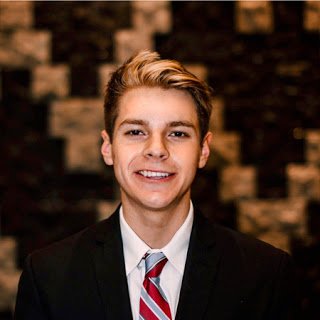 Only 59 were selected out of 756 candidates for the award, nominated by 311 colleges and universities, a record number of institutions. The 194 finalists for the award were interviewed in March and early April at one of 16 regional selection panels. They were chosen by 16 independent selection panels based on the finalists’ academic success and leadership accomplishments, as well as their likelihood of becoming public service leaders.

Madden studies political science and sociology, with an emphasis on research and statistical analysis. He has been active in reforming university and state policies that impact student access and affordability in healthcare, especially as they pertain to reproductive public health.

“Public service is important because without it, we have nothing,” Madden says. “Fighting for equal treatment of all people and their right to access fundamental resources and services such as healthcare, is absolutely essential to an equitable society.”

During his freshman year, he started a political advocacy organization aimed at making reproductive healthcare more accessible and affordable. Active in student government, he is one of 16 students who help allocate student fee dollars, draft the University Health Services budget, and advocate alongside state policymakers (both state and federal) for policies and positions that help UW students. Madden has worked in research institutions, campaign offices, nonprofits, and several university committees dedicated to making campus more equitable, accessible, and affordable to all students.

“I would encourage others to get involved by finding out what angers or confuses them – what policies and practices just do not make sense, and what can be done to change that? And from there, dedicate your all into that change,” Madden says.

The Harry S. Truman Scholarship Foundation was created by Congress in 1975 to be the nation’s living memorial to President Harry S. Truman. The Foundation has a mission to select and support the next generation of public service leaders. The Truman award has become one of the most prestigious national scholarships in the United States.

Recipients of the Truman Scholarship receive a $30,000 scholarship toward graduate school. Scholars also receive priority admission and supplemental financial aid at some premier graduate institutions, leadership training, career and graduate school counseling, and special internship opportunities within the federal government. Recipients must be U.S. citizens, have outstanding leadership potential and communication skills, demonstrate academic excellence, and be committed to careers in government or the non-profit sector.

Madden plans on applying to the University of Wisconsin Law School and pursuing a career in politics.

Annually, candidates for the Truman Scholarship go through a rigorous, multi-stage selection process. They will receive their awards in a ceremony at the Harry S. Truman Presidential Library and Museum on May 27.

A listing of the new Scholars can be found at the Truman Foundation’s website: http://www.truman.gov.