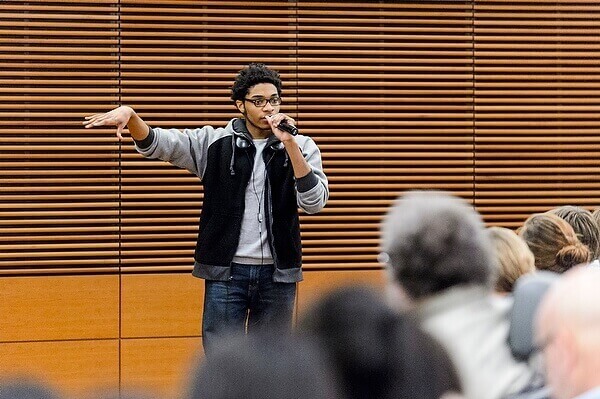 Deshawn McKinney, a UW–Madison English-creative writing student, activist and artist has been selected to receive the Truman Scholarship.

The Harry S. Truman Scholarship Foundation has a mission to select and support the next generation of public service leaders. The Truman award has become one of the most prestigious national scholarships.

The 775 candidates went through a rigorous, multi-stage selection process and 54 Truman Scholars were selected to receive $30,000 toward graduate school. They will also have opportunity to participate in professional development programming.

McKinney, a junior, has been a vocal leader for the Black Lives Matter movement on campus and strives for social justice and racial equity. He is also a member of First Wave and a PEOPLE scholar and is currently studying abroad in Tokyo.

McKinney was one of four Wisconsin nominees, three of whom attend UW–Madison. The Milwaukee native represented Wisconsin on the national stage alongside fellow Badgers Wilder Deitz of Madison and Jake Roble, who is originally from Palatine, Illinois, but now resides in Madison.

McKinney spoke via email with University Communications about receiving the honor. This interview has been condensed.

Q: Given how many applicants were nominated and the general prestige of the award, what does it mean for you to receive the Truman Scholarship?

A: It means so much to me. All of the work I put in this year has revolved around asking myself one question: “What is the capacity for this to make real, sustainable change?”

I approached the Truman Scholarship with the same question back in the fall. I knew that receiving this scholarship would open doors for so many people to come after me, it would mean so much to the various communities that have molded me, and it would further the work we all were already engaged in.

So, yes, this scholarship is about showing how far I’ve come and getting closer to being the man I need to be for my family, but much more so it’s about placing value on black lives and validating the work being done towards achieving liberation. It’s about further validating First Wave and its activism pillar. It’s about uplifting the PEOPLE program and the good they do for thousands of students across the state. It’s about never forgetting Rufus King International School and always loving the city of Milwaukee — the actual city where you and the streets share a heartbeat. And it’s about how possible it is for those of us from the bottom to claw our way out and carve out a place in society.”

Q: How has being in First Wave influenced or enriched your college career?

A: First Wave has been one of the biggest influences throughout my college career. I have performed, traveled, mentored, been mentored, collaborated, met legends, and so much more as a student in First Wave.

Our university does not yet understand the gem that this program is, how precious and unique and groundbreaking it is, so it is not properly supported in a myriad of ways. The university is still wary, maybe even afraid of this program, because of what it brings to campus and how it challenges, how it disrupts the standard relationship between the academy and the arts, textbooks and the block, hip-hop culture and the dominant white heteronormative patriarchy ever present in our society.

I have worked for the program for the past two years and I have seen the politics, engaged in them, and fought in those trenches, and it is ugly, but we still breathe, and I’m still unapologetically black so we’re doing something right.

Q: As a leading voice for the Black Lives Matter movement, how has being abroad affected how you view its progress? Or moreover, in what ways has BLM played a pivotal role in your life as a student and a citizen?

A: In terms of the larger Black Lives Matter movement, being abroad has always felt like a sort of relief from the trauma that makes the movement necessary. Last summer I was overseas for most of it and the closer I got to my return date, the more I would think about how, as soon as my plane landed in the U.S., I would be right back in it. In many ways being abroad offers this false sense (although real in some ways) of security, especially from racialized things. In China we all got looks as foreigners, as Americans, but they never felt hostile, and I never felt like the looks meant something different because of my blackness. In the U.S., on campus, it feels different at best, threatening at worst, and I’m acutely aware of those looks. Sometimes they feel as if someone is validating my death for the way I dress or how I talk, and that’s an unpleasant environment to exist in.

That said, however, there is a part of me that feels a little guilty about being abroad during these times. So much is happening that I believe I could contribute to, and I still do what I can from here, but it certainly is not as much as I could do on the ground.

The movement itself has completely shifted my life, or activated me, as it has done for countless others. Like I said, I never pictured myself doing this kind of work, I never considered a career in public service or venturing into politics, but all of those are viable options now.

Q: What are your general thoughts (though I’m sure it’s difficult to condense in one paragraph) on #TheRealUW?

A: I have many thoughts on #TheRealUW. I believe my time abroad helps me capture a big picture perspective of the entire situation, and I see a lot of miscommunication and misinformation being spread on both sides. I will say that the movement is not new, nor are the issues being spoken on and rallied against, but it is so encouraging to see students finding their voice, with First Wave students at the helm, and asserting their place on campus; it is at the same time disheartening that students still have to carry these torches.

Historically white institutions like UW–Madison were certainly not built for students like me (poor, black, from inner city Milwaukee), and they have a ways to go before students like myself can call them home without caveats (i.e. folks like Abraham Lincoln atop Bascom aren’t a welcoming presence for me as a black man considering he didn’t view us as equal).

At the same time, I do know that administration is trying to make campus a better place. As individual humans I don’t believe people like (Vice Provost and Dean of Students) Lori (Berquam) and (Vice Provost and Chief Diversity Officer) Patrick (Sims) are the enemy, but the institution they serve is steeped in a racial tradition that is exclusive and always threatening (whether physically or psychologically or both) to students of color, black students in particular, and that needs to be eradicated; perhaps the system itself needs to be torn down and grown from new roots.

Those are the conversations students are continuing, and I say continuing rather than starting because everyone always says starting as if every racial epithet and response is another ground zero, when they instead are part of a long line of slurs and attacks and pushbacks; we are not beginning a new conversation, we are building upon work already laid, blood already shed, so that we can end the conversation one day.

So we are all working, but us as students, we’re tired, and the progress is not happening fast enough, and it is not happening in the best manner that it could be so we push. Both the admins and UWPD have had serious missteps in handling racial and sexual assault incidents on campus, and there’s no excuse for that. #TheRealUW is about holding those entities accountable and ensuring that proper change happens.