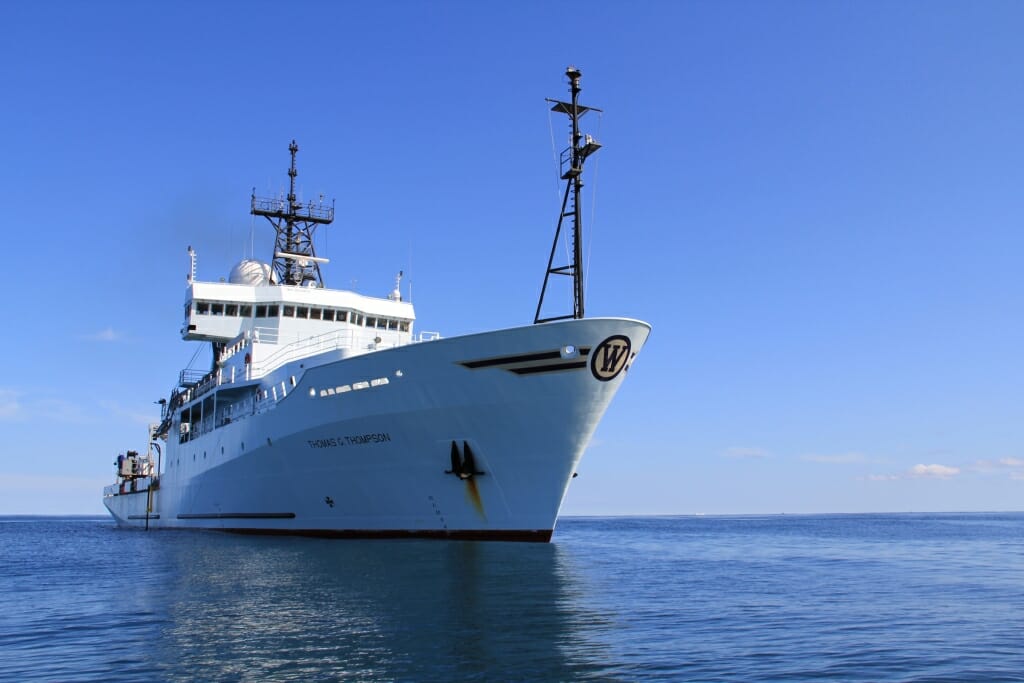 A portable research lab known as SPARCLET, developed at UW–Madison, traveled aboard the research vessel Thomas G. Thompson for two months to aid in a study aimed at better understanding how pollutants and turbulent conditions over the Philippine Sea affect the region and influence global weather. Photo: University of Washington School of Oceanography

A portable research lab developed by University of Wisconsin–Madison scientists and engineers recently returned home to Madison following a 22,000-mile journey to the Philippine Sea and back during the heart of monsoon season.

The lab, known as SPARCLET, traveled aboard the research vessel Thomas G. Thompson for two months to aid in a study called the Propagation of Intra-Seasonal Tropical Oscillations, or PISTON. It is aimed at better understanding how pollutants and turbulent conditions over the Philippine Sea affect the region and influence global weather. 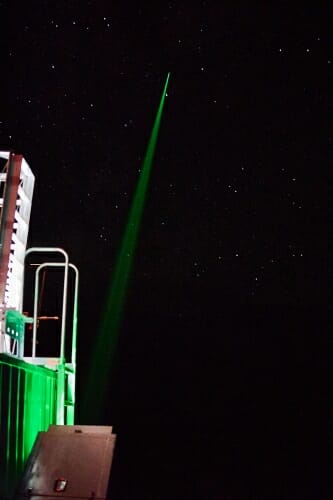 The High Spectral Resolution Lidar’s green laser is clearly visible during nighttime operations. The HSRL is capable of collecting atmospheric measurements regardless of the time of day. Photo: Igor Razenkov

For example, researchers want to improve regional forecasts by learning more about aerosols, such as smoke and exhaust, and how they interact with clouds to form atmospheric convection.

Aboard the vessel, a crew of international collaborators used a robust set of instruments to capture everything from oceanographic measurements to detailed atmospheric observations.

“Space Science and Engineering Center (SSEC) scientists and engineers contributed to the ship’s instrument fleet by building a portable research lab called the SPARCLET,” says Bob Holz, SSEC scientist and PISTON collaborator. “Its purpose is to provide a climate-controlled and hardened portable lab that can be easily shipped and deployed anywhere in the world.”

The SPARCLET is a downsized version of a 17-foot towable laboratory used to make land-based atmospheric field observations, called the SSEC Portable Atmospheric Research Center (SPARC). Like the SPARC, SPARCLET can carry two primary instruments: the High Spectral Resolution Lidar (HSRL) and the Atmospheric Emitted Radiance Interferometer, both of which were also designed and built at SSEC. 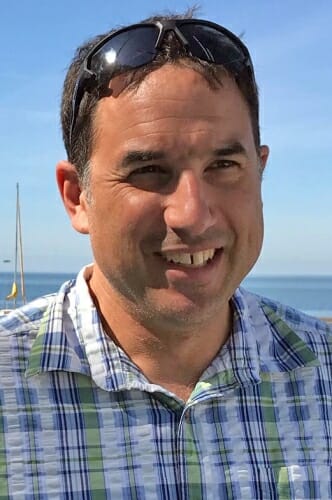 However, for PISTON, the SPARCLET was fitted with the HSRL, which takes atmospheric measurements of aerosols. Aerosols are found in high concentrations over the Philippine Sea and can affect weather through convective processes and cloud seeding.

To accommodate the maritime mission, SSEC engineers built the compact structure to house the HSRL using a standard metal shipping container, or “seatainer,” to withstand the long journey, while making it readily deployable from a ship’s deck.

This presented some engineering challenges, Holz says. For instance: “We needed to mount the HSRL in the container to fit the instrument’s rotating telescope, and make sure it was still structurally sound.”

The HSRL was first developed at SSEC nearly 50 years ago by Ed Eloranta, a scientist at SSEC. It is capable of continuously and accurately measuring and resolving thin aerosols and clouds, crucial for understanding atmospheric conditions. Eloranta’s system is one of the few in the world with the required measurement sensitivity and capacity to be deployed on a ship.

The experiment ran from mid-August until mid-October 2018 and was designed to observe conditions during the boreal summer intraseasonal oscillation, a component of the Asian summer monsoon. 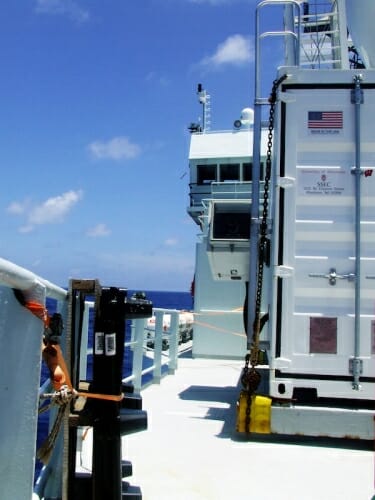 SSEC engineers built a custom structure to house and transport the HSRL by fitting it into a standard shipping container. Photo: Igor Razenkov

As the crew collected data over several hundred nautical miles, they were twice rerouted when tropical cyclones passed through their areas of operation. Despite the disruptions, however, the passing typhoons presented an opportunity to collect more data.

“The resulting ocean churning from the storm gave us a chance to observe the air and sea conditions in its wake,” says Coda Phillips, a UW–Madison graduate student in the Department of Atmospheric and Oceanic Sciences.

Phillips was part of the deck crew for one month of the journey. He operated the HSRL for daily measurements and collected particle samples. During the field campaign, conditions were not as extreme or dynamic as they sometimes can be in the region, but, Phillips explains, the study captured observations of a suppressed phase in the oscillation.

In October 2018, the SPARCLET began its journey back to Madison. Holz and his team are now analyzing the data.

The PISTON project is a part of a larger NASA mission, the Cloud, Aerosol and Monsoon Processes Philippines Experiment. During the mission‘s next phase, Holz and his team will deploy an updated version of the HSRL to the Philippine capital of Manila. Ground-based instruments will provide validation measurements for weather satellites and high-altitude aircraft instrumentation.

“This project offers a great chance to bridge science and applications into hardware development,” he says. “The development of this instrument took years to complete and expertise from different fields, but we’re excited to take part in this campaign.”

This research was supported by SSEC, the U.S. Office of Naval Research and NASA.